The death toll from a collapsed Miami-area condominium high-rise rose to 36 on Tuesday as rescue workers dealt with the threat of wind and rain from a tropical storm and relatives of the deceased prepared for the disaster’s first funeral.

A total of 109 people are reported missing 12 days after roughly half of the Champlain Towers South building came tumbling down early in the morning on June 24. Hundreds of rescue workers expanded their search following the controlled demolition of the remainder of the building on July 4.

“Truly they live to save lives, and they’ve pushed ahead no matter what is thrown in their way,” Miami-Dade County Mayor Daniella Levine Cava said during a news conference on Tuesday, before the updated fatality figures were announced.

The increased death toll came hours after several hundred mourners filled a Miami Beach church for the first funeral for victims who died in the tower’s collapse.

Marcus Guara, 52, his wife Ana Guara, 42, and their daughters, Lucia, 10, and Emma, 4, were recalled at the service as a tight-knit family who enjoyed walking on the beach and doing other simple things together.

Although weather forecasts predict the Surfside area is likely to avoid the brunt of Tropical Storm Elsa on its projected course to the western side of Florida, scattered showers, thunderstorms and stiff winds threatened the search and rescue effort.

Power saws and backhoes could be heard as workers in yellow helmets, blue jumpsuits and wearing face masks sifted through the rubble for a 13th day. Workers have removed 124 tonnes of debris from the pile. A garage area in the rubble has filled with water.

Tropical Storm Elsa appears to be intensifying as it moves past the Florida Keys on Tuesday morning after dumping heavy rain over Cuba, and heads towards the west coast of Florida, where it was expected to make landfall on July 7.

The US National Hurricane Center said on Tuesday morning the centre of Elsa was about 105 kilometres (65 miles) west-northwest of Key West and was moving northerly at around 17km/h (10mph), with maximum sustained winds of around 95km/h (60mph).

Nobody has been pulled alive from the mounds of pulverized concrete, splintered lumber and twisted metal since the early hours of the disaster in an oceanfront town adjacent to Miami Beach in Florida.

Investigators have not determined what caused the 40-year-old complex to collapse. A 2018 engineering report found structural deficiencies that are now the focus of inquiries that include a grand jury examination. At least five lawsuits have been filed on behalf of residents who survived or are feared dead.

“We deserve to be able to walk into buildings without worrying that they’re going to come crumbling around us and to know that our loved ones can go to bed at night without worrying that they’re going to plummet 12 storeys to the ground below in their sleep,” said Jeffrey Goodman, a lawyer who filed suit on behalf of the children of a missing resident.

The demolition of the unstable remainder of the building on July 4 – prompted by fears that the structure could fall – allowed rescuers into previously inaccessible places, including bedrooms where people were believed to be sleeping at the time of the disaster, officials said.

“The site is busier and more active now than I’ve seen it since we began, now that the damaged building is down,” Surfside Mayor Charles Burkett said, adding that heavy equipment was now able to move freely around the site.

Rescuers had hoped to get a clearer picture of empty spaces within the rubble where anyone who may have survived the collapse might still be trapped under the fallen building, but they found very few such voids, Jadallah told family members. 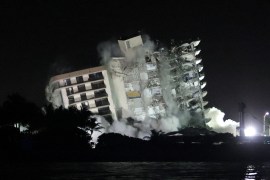 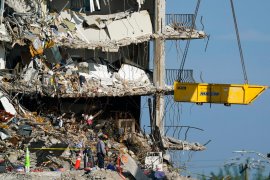 More dead, including a child, found in ruins of Florida collapse

List of missing and feared dead reduced to 128 after some found safe and duplicate names removed, Miami-Dade mayor says. 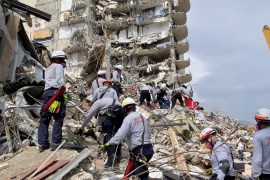 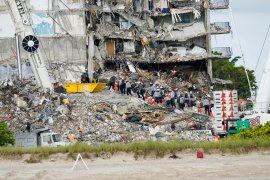