Pakistan’s national security adviser has accused India of financing, planning and carrying out a deadly bombing in the eastern city of Lahore late last month, saying an investigation links the attack directly to India’s intelligence services.

“Today I can tell you, with full confidence and without any ambiguity that this whole attack is directly connected to India’s sponsorship of terrorism against Pakistan,” Moeed Yusuf said at a news conference in capital Islamabad on Sunday.

“We have identified the main mastermind and the handlers of this terrorist attack, and we have absolutely no doubt or reservation in informing you that the main mastermind belongs to RAW, the Indian intelligence agency, is an Indian national and is based in India.”

The explosion took place on June 23 in the Johar Town area of Lahore, outside the residence of Hafiz Muhammad Saeed, founder of the Lashkar-e-Taiba armed group and designated as a “terrorist” by the United States, the United Nations and Pakistan.

Yusuf said the investigation had been conducted through forensic analysis of a number of apprehended suspects’ phones and other equipment.

The provincial police chief of Punjab province, of which Lahore is the capital, identified at least three Pakistani citizens who have been arrested in connection with the attack, while the identities of the alleged mastermind and other facilitators who Pakistan say are Indian nationals were not made public.

“The financing that was done from outside, the connections with the outside, the telephone calls, WhatsApp calls, the whole record, everything is with us,” said Inam Ghani, the police chief.

Ghani detailed how the car used in the vehicle-borne improvised explosive device (VBIED) attack was prepared, what routes it took and where it was parked on the day of the attack.

India and the US accuse Saeed of being the “mastermind” behind the 2008 Mumbai attacks, which killed more than 160 people in shootings and bombings across the Indian financial capital.

Saeed was convicted by a Pakistani court last year for financing terrorism and sentenced to 15 years in prison. He remains in custody, but his exact whereabouts are unknown.

At least three people were killed and 22 others wounded in the attack outside his Lahore home.

India and Pakistan regularly accuse each other of sponsoring attacks on each other’s territory.

Yusuf said the June 23 attack in Lahore coincided with “thousands of coordinated cyberattacks on our investigation infrastructure”, which he termed proof of Indian state involvement.

“[The cyberattacks] were done so that our investigation, the terrorist network we were identifying, not be successful and it faces obstacles, and that enough time be gained that the network may [disperse].”

The Indian external affairs ministry did not immediately offer any comment on the allegations. 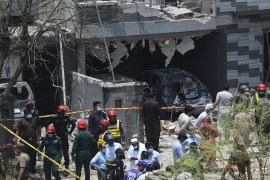 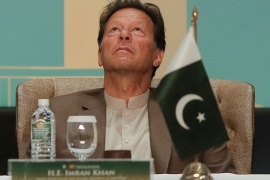 Imran Khan repeats support for Chinese government with regard to its policies in Muslim-majority Xinjiang province. 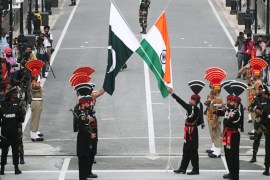 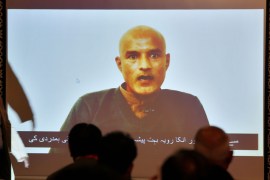