All 96 passengers on board a Philippines Air Force transport plane that crashed on Sunday killing at least 50 people – on the plane and on the ground – have been accounted for, military chief Cirilito Sobejana said on Monday.

Sobejana said 49 soldiers were injured in the fiery crash, which happened when the C-130 Hercules transport plane missed the runway while trying to land on the southern island of Jolo where the military is fighting the Abu Sayyaf and other armed groups.

The Department of National Defence said on Sunday that three civilians on the ground were also killed while four were injured.

According to the military, the three pilots were among those who survived the crash but were in a serious condition.

Defence Secretary Delfin Lorenzana said he had ordered an investigation of the incident, which would begin after rescue and recovery operations had been completed. A military spokesman told Reuters news agency that the plane was in “tip top shape” and had 11,000 hours flying time before its next scheduled maintenance. 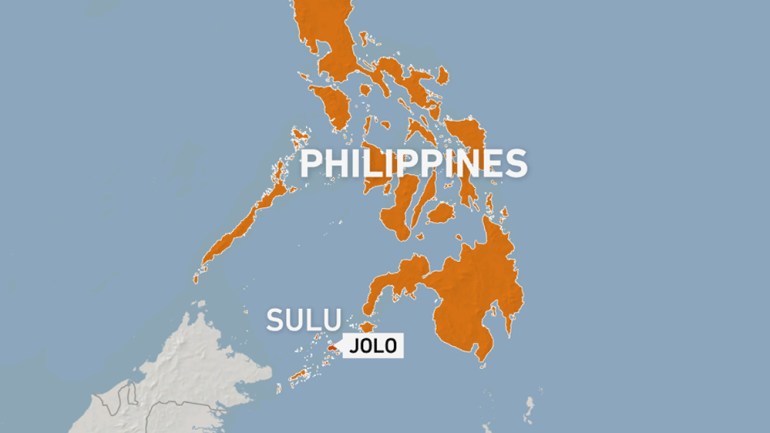 The plane was one of two ex-US Air Force aircraft handed over to the Philippines as part of military assistance this year.

Al Jazeera’s Jamela Alindogan, reporting from Manila, said helicopters were deployed to transport the injured to a nearby hospital. She said the most seriously injured had been taken to Zamboanga City, an hour’s flight away.

The plane was transporting soldiers, many of whom had just undergone basic training, from the southern Cagayan de Oro city for deployment in Sulu, officials said.

“They were supposed to join us in our fight against terrorism,” Sulu military commander Major General William Gonzales said. Government forces have been battling the Abu Sayyaf, which is notorious for kidnappings for ransom, in the predominantly Muslim province of Sulu for decades.

Initial pictures released by the military showed the tail section of the cargo plane.

The other parts of the plane were burned or scattered in pieces in a clearing surrounded by coconut trees. Soldiers and other rescuers with stretchers could be seen dashing into and from the smoke-shrouded crash site.

A military spokesman, Colonel Edgard Arevalo, said there was no indication of an attack on the plane, but that a crash investigation had not begun and efforts were focused on rescue and treatment.

Among those who survived the crash were Private Roejader Colata and Private First Class Reymart Bulat-ag, both from the province of Zamboanga del Norte in Mindanao.

Before boarding the flight, Colata held a video call with his older brother, Rayrafar, to update him about his first deployment after his training.

Roejader, who turned 22 on June 9, had just completed his military training on June 23, his father, Edwin, told Al Jazeera in a separate interview.

Rayrafar said that the next thing he heard was that his brother’s plane had crashed.

“We were so worried for many hours, because we only received information that my brother survived after 5pm (07:00 GMT) on Sunday,” he told Al Jazeera.

“Those hours were so excruciating when we had to wait for the news of his condition. Now my parents are somewhat relieved. But we still haven’t talked to him yet.

The accident comes after a Black Hawk helicopter crashed last month during a night-time training flight, killing all six on board.

Three pilots and three airmen died when their S70-i went down near the Crow Valley training range north of Manila, prompting the grounding of the entire fleet.