Two crew members, a Briton and a Romanian, were killed when a petroleum products tanker managed by Israeli-owned Zodiac Maritime came under attack on Thursday off Oman’s coast, the company said on Friday.

London-based Zodiac said on its website that the attack in the Arabian Sea on Mercer Street, a Liberian-flagged Japanese-owned ship, was still being investigated.

The US Navy rushed to the scene following the attack and was escorting the tanker to a safe harbor, a London-based ship management company said Friday.

The assault represented the worst-known maritime violence so far in regional attacks on shipping since 2019. The US, Israel and others have blamed the attacks on Iran amid the unraveling of Tehran’s nuclear deal with world powers.

Iran now already appears poised to take an even tougher approach with the West as the country prepares to inaugurate a hard-line protégé of Supreme Leader Ayatollah Ali Khamenei as president next week.

Earlier on Friday, it had described the incident as suspected piracy but the United Kingdom Maritime Trade Operations (UKMTO), which provides maritime security information, says it was not piracy.

“Details of the incident are still being established and an investigation into the incident is currently underway. We continue to work closely with the UKMTO and other relevant authorities,” said Zodiac, which is owned by the wealthy Israeli Ofer family.

Our statement on the situation involving the M/T Mercer Street: pic.twitter.com/V7L4fBmnEQ

It said it was “not aware of harm to any other personnel” than the British and Romanian crew members who were killed.

The UKMTO said the vessel was about 152 nautical miles (280 km) northeast of the Omani port of Duqm when it was attacked. It gave no more details on the type of vessel, any cargo, to whom it belonged or about possible casualties.

In an advisory note, UKMTO said it had been informed that regional search and rescue authorities and coalition forces have been tasked to assist the vessel.

According to Refinitiv ship tracking, Mercer Street, a medium-sized tanker, was headed to Fujairah, a bunkering port and oil terminal in the United Arab Emirates, from Dar es Salaam in Tanzania.

In a statement to Al Jazeera later on Friday, a UK Ministry of Defence spokesperson said: “We are aware of reports of an attack on a merchant vessel off the coast of Oman. UK military headquarters in the region are currently conducting investigations.”

The ministry had earlier misidentified the ship’s owners.

Israeli Foreign Minister Yair Lapid blamed the incident Iran, adding that he had told Britain’s foreign secretary of the need for a tough response to the incident.

“Iran is not just an Israeli problem, but an exporter of terrorism, destruction and instability that harms us all. The world must not be silent in the face of Iranian terrorism that also harms freedom of shipping,” Lapid said in a statement.

US and European sources familiar with intelligence reporting said Iran was their leading suspect for the incident, which a U.S. defense official said appeared to have been carried out by a drone, but stressed their governments were seeking conclusive evidence.

Al Alam TV, the Iranian government’s Arabic-language television network, cited unnamed sources as saying the attack on the ship came in response to a suspected, unspecified Israeli attack on Dabaa airport in Syria.

There was no immediate official reaction from Iran to the accusation that it may have been responsible.

Israeli news website Ynet said the assessment in Israel was that there were two attacks on the ship, spaced several hours apart. The first caused no damage, and the second hit the bridge, causing the casualties.

It quoted an unnamed Israeli official as saying: “Israel will find it hard to turn a blind eye” to the attack.

Oman did not immediately acknowledge the attack.

A US official, speaking on condition of anonymity to discuss the ongoing investigation, told The Associated Press that the attack appeared to have been carried out by a “one-way” drone and other drones took part. The official said it wasn’t immediately known who launched the attack and declined to elaborate.

The official’s remark came after an earlier report from private maritime intelligence firm Dryad Global referred to a drone sighting involving the vessel prior to the attack. Iran and Yemen’s Tehran-backed Houthi rebels have employed suicide drones in the past, unmanned aircraft loaded with explosives that detonate on impact with a target.

Other Israel-linked ships have been targeted in recent months as well amid a shadow war between the two nations, with Israeli officials blaming the Islamic Republic for the assaults.

Israel meanwhile has been suspected in a series of major attacks targeting Iran’s nuclear program. Iran also saw its largest warship recently sink under mysterious circumstances in the nearby Gulf of Oman.

Tensions have risen in the Gulf region since the United States re-imposed sanctions on Iran in 2018 after then-President Donald Trump withdrew Washington from Tehran’s 2015 nuclear deal with major powers.

Washington has blamed Iran for a number of attacks on shipping in strategic Gulf waters, including on four vessels, two of them Saudi oil tankers, in May 2019. Iran distanced itself from those attacks.

In recent months, Iran and Israel have traded accusations of attacking each other’s vessels. 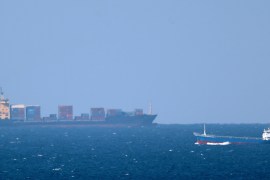 Crew reported safe and vessel heads to nearest port as circumstances of the explosion remain unclear. 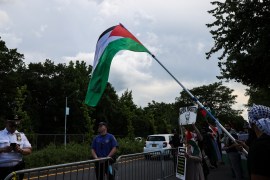 How activists are targeting an Israeli shipping line

Protesters have been attempting to block ships operated by the Israeli company ZIM, trying to put pressure on Israel. 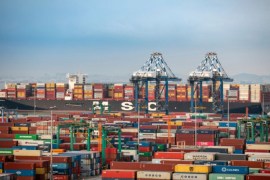 COVID-19 infections in China cause delivery delays and shortages around the world.