At least eight civilians, including six children, were killed in shelling and artillery fire by Russian-backed Syrian government forces in Idlib on Saturday, a war monitor said and a rescue group said.

The attacks also wounded 16 people in several locations of the Jabal al-Zawiya area in the south of the stronghold, the UK-based Syria Observatory for Human Rights (SOHR) said.

It killed five members of the same family in the village of Iblin, two children in Balyun village and another child in Balshun village, it said.

Syria’s Civil Defence, a volunteer search and rescue group also known as the White Helmets and operating in rebel-held parts of Syria, confirmed the deaths.

“A horrific massacre committed by Russia & regime forces this morning in #Idlib countryside, where 8 civilians … were killed,” the group said on Twitter, adding that search and rescue efforts were still under way.

In Iblin, an AFP news agency photographer saw the bodies of the family arrive at a health dispensary, wrapped in woollen and cotton blankets.

Nurses and other people prepared the bodies for burial, cleaning the bloodied corpse of a young boy before swaddling it in gauze, he said.

Translation: The picture is from Jabal al-Zawiya where an entire family lost their lives as a result of Russian shelling which targeted their home.

Saturday’s death toll is one of the highest since an international ceasefire came into force in March last year to protect the rebel-dominated bastion from a government offensive.

Much of the Idlib enclave is controlled by Hayat Tahrir al-Sham, an armed group that includes former members of Syria’s former al-Qaeda franchise.

But violations of the truce, brokered by government ally Russia and opposition backer Turkey, are frequent, as government forces maintain pressure on the rebel enclave.

In the past weeks, Russian warplanes have pounded the southern Idlib region in tandem with artillery shelling by government forces, according to SOHR.

Meanwhile, hundreds of humanitarian workers formed a human chain in northern Idlib on Friday, urging the international community to keep open the only border crossing for aid into the rebel-held region.

“Humanitarian aid is a right, not a privilege,” one sign held up by aid workers read, while others stood in a pattern on the road, so that the words “save lifeline” were visible from the air.

A UN authorisation for aid to transit through the Bab al-Hawa border crossing from Turkey into Syria expires on July 10.

Aid organisations fear that Russia may block a UN Security Council vote to renew it for a year.

Wassim Bakir, from Syrian charity Banafsaj, said if cross-border aid was blocked it would be a “humanitarian catastrophe”.

Rebel-held Idlib province is now facing a raging coronavirus pandemic while much of its healthcare facilities are in ruins. The region is home to nearly three million people, most of whom are internally displaced.

The war in Syria has killed nearly 500,000 people since it started in 2011 with the brutal repression of peaceful demonstrations. 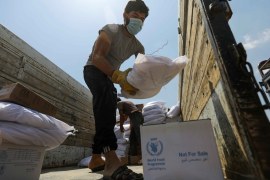 If the UNSC does not pass a resolution extending aid transfer to northwest Syria, millions will face famine and disease. 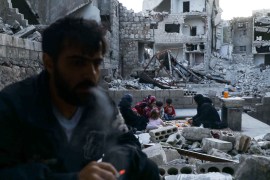 The watchdog says the targeting of civilians by the Syria-Russia alliance may amount to crimes against humanity. 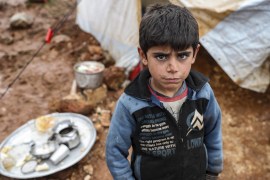 Report describes 17 attacks on hospitals, 14 involving schools, nine on markets, and 12 on civilian homes in Idlib.