Armenian Prime Minister Nikol Pashinyan has proposed that Russian border forces be stationed along the length of his country’s border with Azerbaijan amid rising tensions between the two neighbours.

His comments on Thursday came as Armenia and Azerbaijan accused each other of flouting a Russian-backed ceasefire that both sides had accepted the previous day to halt deadly clashes over their joint border.

“Given the current situation, I think it makes sense to consider the question of stationing outposts of Russian border guards along the entire length of the Armenian-Azeri border,” Pashinyan was quoted as saying at a government meeting by the TASS news agency.

He said Armenia was preparing to discuss the proposal with Moscow and that the move would allow work to be carried out on the demarcation and delimitation of the border without the risk of military clashes.

Armenia’s defence ministry said earlier that Azeri troops had opened fire on Armenian positions at the Gegharkunik section of the border in the early hours of Thursday morning, prompting Armenia to return fire.

It described the situation as calm as of 7am local time (03:00 GMT) in a statement.

Azerbaijan’s defence ministry said in a statement that Armenian forces had opened fire with machine guns and grenade launchers in the direction of a village in the Kelbajar region, and had thrown hand grenades. It said its forces returned fire.

The ceasefire was called on Wednesday after some of the heaviest border clashes since last year’s six-week war between ethnic Armenian forces and Azeri troops over the disputed Nagorno-Karabakh region and surrounding areas.

Last year, in fighting from September to November, Azeri troops drove ethnic Armenian forces out of swaths of territory they had controlled since the 1990s in and around the Nagorno-Karabakh region, before Russia brokered a ceasefire.

A simmering border dispute between the two has since flared up, with both sides accusing each other of separate incursions into each others’ territory in recent months, highlighting the fragility of the ceasefire.

Moscow has deployed some 2,000 peacekeepers in the area to oversee the November agreement.

The United States on Thursday said it condemned the “recent escalation of violence along the international border between Armenia and Azerbaijan” and called on both parties to uphold their ceasefire commitments.

“Continued tensions along the Armenia-Azerbaijan border underscore the fact that only a comprehensive resolution that addresses all outstanding issues can normalise relations between the two countries and allow the people of the region to live together peacefully,” State Department spokesman Ned Price said in a statement. 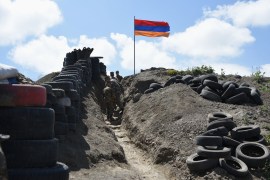 Incident was one of deadliest since a six-week war between ethnic Armenian forces and Baku over Nagorno-Karabakh. 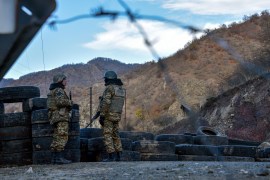 Three killed and four wounded after anti-tank mine explodes in the Kalbajar region. 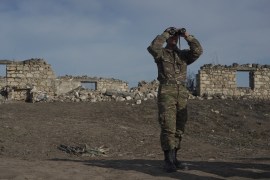