The Cuban embassy in Paris says its building was attacked overnight with petrol bombs, causing serious damage but no injuries to diplomatic staff.

The embassy on Tuesday condemned the attack on its premises, located in the French capital’s 15th arrondissement.

It did not say who it thought was responsible for the incident, which occurred around midnight on Monday.

Cuban diplomats extinguished the blaze as French firefighters and police arrived at the scene, it added.

There was no immediate comment from French police, but Cuban Minister of Foreign Affairs Bruno Rodriguez put the blame for the incident on the United States.

“I hold the US Government responsible for its continuous campaigns against our country that encourage these behaviours and for calls for violence, with impunity, from its territory,” he said in a post on Twitter.

A spokeswoman for the French Foreign Ministry said France condemned the attack and added that a judicial investigation had been opened over the incident.

Over the past three weeks, Cuban embassies in several cities around the world have been the scene of demonstrations both against and in support of Cuba’s government in reaction to protests that erupted across the country on July 11 and 12.

The rallies were triggered by a deep economic crisis, the government’s handling of the coronavirus pandemic and curbs on civil liberties, prompting the Communist-run country to restrict access to social media and messaging platforms.

US Secretary of State Antony Blinken and the foreign ministers of 20 other countries issued a joint statement on Sunday condemning mass arrests in Cuba and calling for full restoration of Internet access there.

Cuba has accused Washington of fomenting a social media campaign aimed at destabilising the Caribbean nation, which is going through a severe economic crisis exacerbated by COVID-19 and US sanctions.

The “statements of the US secretary of state are based on the support of a handful of countries that have been pressured to accept his decrees”, Rodriguez said in a separate tweet.

“#Cuba counts the support of 184 nations that all call to #EndTheEmbargo,” he added, referring to the US government’s longstanding sanctions, which have been in place since 1962. 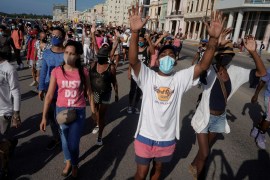 Hundreds were arrested during protests this month and many face charges of contempt, public disorder and vandalism. 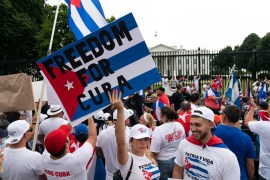 ‘Just the beginning’: US imposes new sanctions on Cuba

The move signals the Biden administration is unlikely to soften the US approach towards Cuba anytime soon. 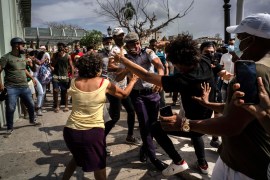 The US embargo on Cuba has failed

If Biden truly wants to put principles, and effectiveness, ahead of politics, he should end the US embargo on Cuba.