Guatemalan anti-corruption prosecutor Juan Francisco Sandoval fled the country early on Saturday, hours after being sacked in a move that sparked international outrage.

Sandoval, who had led the Guatemalan Special Prosecutor’s Office Against Impunity (FECI) until Friday, fled to the Salvadoran border in the wee hours of Saturday, said Jordan Rodas, the Guatemalan human rights ombudsman.

“The decision was made to safeguard his life,” Rodas told the Reuters news agency.

Sandoval arrived in La Chinamas, a border town in El Salvador, about 120km (75 miles) southeast of Guatemala City. He was accompanied on his trip out of Guatemala by human rights activists, Swedish Ambassador Hans Magnusson, and journalists from The Associated Press.

“Sadly, this has become a situation that many public servants in Guatemala have had to go through simply because we are not useful for the regime,” Sandoval said, as reported by AP.

“Wherever I am, I’m going to continue working for the good of the people of Guatemala, but for my own safety, I am not going to be used by people who have made exploiting government funds a way of life,” he said.

A government statement earlier that day said Porras had removed Sandoval due to “constant abuses and frequent abuses to the institutionality” of the ministry. “Given the imminent lack of trust in the relationship, today his employment is terminated,” Porras said.

Edgar Ortiz, director of legal research at the Liberty and Development Foundation, told Al Jazeera that Guatemalans are deeply disappointed by the removal of Sandoval, whom Ortiz described as “the most visible face” in the fight against corruption.

The unit Sandoval headed was originally created to tackle investigations spearheaded by the United Nations-backed International Commission Against Impunity in Guatemala (CICIG), which was removed from the country in 2019.

He is a respected anti-corruption prosecutor with a record of pursuing dozens of criminal networks. Together with the former UN anti-corruption mission he helped take down former President Otto Perez Molina and some members of his cabinet on corruption charges.

“Prosecutor Sandoval was … the main contributor to this commission and to the fight against corruption so the general public is pretty much disappointed and mad (at) the government,” Ortiz told Al Jazeera from Guatemala City on Saturday.

“There is a relationship between corruption, drug dealing and organised crime,” he added, explaining that the corruption investigations carried out by Sandoval’s unit “have reached very powerful people and that explains what is happening to Sandoval now”.

As I stressed in my visit last month, the independence of #FECI is an essential test of Guatemala’s commitment to the rule of law. Attorney General Porras’s firing of anti-corruption champion Juan Francisco Sandoval is an outrageous move. The Guatemalan people deserve better. https://t.co/y3ssKrhoTs

Sandoval’s removal prompted anger in Guatemala, with hundreds protesting outside the presidential palace on Saturday and the country’s most powerful campesino groups calling for a general strike on Monday.

The prosecutor’s dismissal underscores the challenges that the administration of US President Joe Biden faces in pursuing its anti-graft push in Central America, where it says corruption and impunity are drivers of migration.

“The international community should protect him immediately,” Velasquez said.

Meanwhile, hundreds of Guatemalans protested outside the presidential palace on Saturday against Sandoval’s removal. 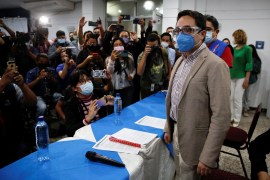 Juan Francisco Sandoval dismissed as head of a special anti-corruption agency against impunity. 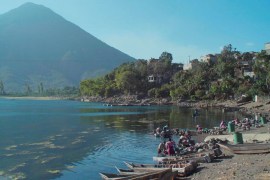 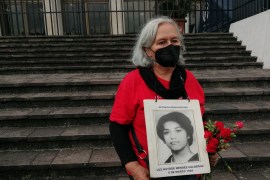