Bangladesh is reimposing its coronavirus shutdown for two more weeks to stem the tide of infections and deaths from the virus after a weeklong recess that allowed Muslims to celebrate the Eid al-Adha festival.

“None will be allowed outdoors unless it is urgent,” police officer Aynal Hossain said on Friday at a makeshift checkpoint in the capital, Dhaka, as members of the law enforcement agencies, including army troopers, returned to the streets to prevent people’s movements.

The current spell of restrictions will last until August 5, according to a government notice.

Last week, the South Asian nation relaxed the restrictions, which were imposed on July 1 to counter a surge in coronavirus cases, allowing tens of thousands of people to leave the big cities for their home villages to celebrate the Muslim festival.

Many of them, however, returned in crowded buses and ferries with public health experts fearing the consequences as Bangladesh reported average infections of nearly 11,000 and more than 200 deaths per day for the last week.

“It will be difficult to handle the situation with limited healthcare facilities if the rate of infections goes up because of the unbridled people’s movement,” said Iqbal Arsalan, a member of the government’s panel of advisers working on tackling the coronavirus outbreak.

State Minister for Public Administration Farhad Hossain told reporters that the government had no other choice but to go for stringent measures to slow the spread of the virus.

There were huge movements of people during the festival, he said, urging those who travelled to their home villages not to return to the cities during the shutdown.

The government notice urged people to stay indoors and ordered offices, shopping malls, transport services and factories to shut until August 5. Food processing factories and other emergency services are excluded, it added.

Bangladesh has so far reported nearly 1.13 million cases and 18,325 deaths since the virus emerged in March last year. 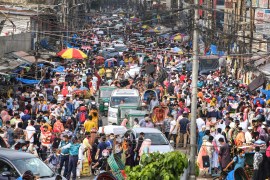 Millions of Bangladeshis shop and travel this week during a controversial eight-day pause in country’s strict lockdown. 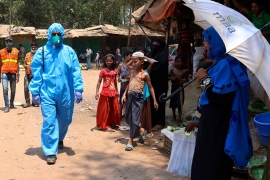 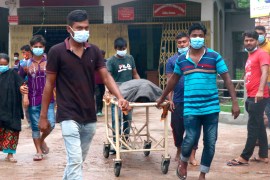