A priest told mourners at a memorial service Thursday for slain President Jovenel Moise that too much blood is being shed in Haiti as authorities warned of more violence before his funeral.

“The killings and kidnappings should stop,” he said, noting that poor communities are the most affected. “We’re tired.”

The mass at the cathedral in the northern coastal city of Cap-Haitien was about half-full as officials warned other events planned for later in the day could be cancelled amid concerns about violence.

Moise supporters kept interrupting the mass as they cried out and accused Haiti’s elite of killing the president.

A man who identified himself as John Jovie stood outside the church with a group of men and threatened more violence if wealthy members of the elite from the capital of Port-au-Prince showed up for the ceremonies.

“We ask them not to come to the funeral,” he said. “If they come, we will cut their heads off. We will bring our guns out of hiding …We want justice for Moise.”

The mayor of Cap-Haitien arrived at the cathedral with heavy security as men with high-powered weapons stood watch during the entire mass.

Demonstrations after the mass turned violent on Thursday afternoon with protesters shooting into the air, throwing rocks and overturning heavy concrete barricades next to the seashore as businesses closed and people took cover.

Some people signed a blue condolences book that the mayor’s office had set up near the cathedral as well-wishers stood before a portrait of Moise and rows of candles whose flames flickered in the hot wind.

The mass was held a day after violence erupted in Quartier-Morin, located between Cap-Haitien and Moise’s hometown.

Overnight, local media reported the burning of a nearby bridge that connected two communities.

A private funeral for Moise was planned for Friday as authorities continue to investigate the July 7 attack at the president’s home, in which he was shot several times and his wife seriously wounded.

Government officials have said Moise was murdered by a team of mostly Colombian mercenaries, but many questions remain unanswered, including why the president’s security forces did not do more to protect him.

At least one person lay dead in the streets of Cap-Haitien following the disturbances, which took place just as Moise’s widow Martine attended her first public event since returning from Miami during the weekend.

Dressed in black, wearing a face mask and with her heavily plastered right arm in a sling, Martine Moise sat in silence beneath a portrait of her husband as a priest delivered a eulogy to the dead statesman.

Martine, who was injured in the attack on her husband, spoke no words, but shed tears as the commemoration ended to the strains of a woman singing “Ave Maria”.

Meanwhile, the US State Department announced the appointment of Daniel Foote, a career member of the Foreign Service, as its special envoy for Haiti.

Haiti’s police chief, Leon Charles, said 26 suspects have been arrested so far, including three police officers and 18 former Colombian soldiers. Another seven high-ranking police officials have been detained but not formally arrested as authorities probe why no one in the president’s security detail was injured that night. 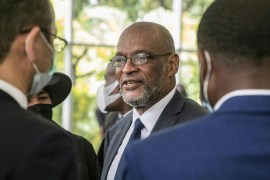 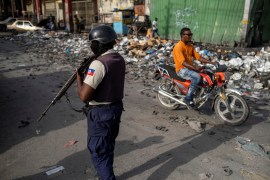 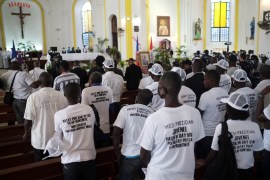 Haitians say goodbye to assassinated President Jovenel Moise with a mass and a wake in Cap-Haitien.