Hossein Nabovati, caretaker of Izeh county’s governor’s office, said on Wednesday that a young man, who he did not name, was hit by a car during protests on Tuesday night and later died of injuries.

“The way he was injured and the identity of his perpetrator or perpetrators is under investigation,” he said.

Nabovati also denied that three more protesters were killed during the protests and said 14 police officials were injured.

Authorities had earlier confirmed that two civilians, 18-year-old Ghasem Khozeiri and 30-year-old Mostafa Naimawi, were shot dead on Friday, but they say the young men were not protesters and were murdered by “opportunists and rioters”.

More protesters are feared dead but officials have yet to confirm further fatalities. They have also not disclosed how many civilians have been arrested.

Iranian authorities said earlier on Wednesday that one police officer, identified by officials as Zargham Parast, was shot dead by “agitators” in Khuzestan, where six nights of protests over water shortages have turned deadly.

State media reported that another police officer in Bandar Mahshahr was wounded after taking a bullet to his leg on Tuesday night, as videos and reports out of the oil-rich southwestern province indicated that violence had not ceased.

Sporadic internet slowdowns or blackouts have been reported across the province for several days. Despite the internet restrictions, numerous videos have come out of several counties in Khuzestan in the past week, in many of which shots can be heard and tear gas is seen being used.

In some videos, protesters can be seen venting angrily at baton-wielding security forces clad in black, riding motorcycles in large numbers.

A video purportedly from Tuesday night showed a tank, set up as a monument to the gruelling eight-year Iran-Iraq war in the 1980s, set on fire while tyres are seen set aflame to close roads.

The videos could not be independently verified.

Oil-rich Khuzestan, parts of which were temporarily seized by Iraq’s Saddam Hussein after he invaded Iran with backing from the West, has faced water problems for decades.

This year, however, has been especially difficult for the province – and the whole country by extension – due to extremely hot temperatures and droughts that have led to widespread blackouts and water shortages.

Officials acknowledge that the province has been hit hard, but they claim separatist groups are to blame for the violence and accuse foreign media of trying to take advantage of the situation to oppose the theocratic establishment.

The government of outgoing President Hassan Rouhani said it has allocated new funds to alleviate the situation while the army and the Islamic Revolutionary Guard Corps (IRGC) said they are deploying water tankers to the thirsty region.

The province also saw some of the largest crowds during the 2019 nationwide protests that formed over the abrupt tripling of petrol prices. Human rights organisations say hundreds were killed during those protests as internet access was almost completely cut off across the country for nearly a week.

Over the past week, both social and conventional media are filled with accounts and news from and reactions to the situation in Khuzestan.

Hashtags in Farsi such as #KhuzestanIsThirsty and #KhuzestanHasNoWater have been widely used to direct attention towards the crisis and protests that have been scantily covered by international media.

Some civilians have tried to raise funds to buy water bottles and tankers to send to Khuzestan, but others have pointed out that such moves belittle the long-term issues faced by the people of the province who require a sustainable solution after years of mismanagement and neglect following the war.

“Khuzestan’s problem stems from illegal water transfer projects from river forks and stealing water from the source of the rivers by water mafias,” tweeted Fereshteh Tabanian, a lawyer based in Ahvaz.

Khuzestan residents have pointed out on social media that the province has never truly had drinkable tap water and they have had to buy their water or take it from the rivers, many of which have now dried up as well.

The same dirty tap water is now shut off for many citizens.

Power outages also exacerbate the situation as many use electricity-powered pumps to get water inside their homes.

On Tuesday, a group of activists and human rights advocates including Narges Mohammadi, who was freed from prison in October 2020 after serving eight and a half years, demonstrated in front of the interior ministry in the capital, Tehran, to express support for the people of Khuzestan.

Mohammadi’s husband, Taghi Rahmani, said the activist and several others were arrested. He later said they were released in the early hours of Wednesday.

“No political, security, military or law enforcement organisation has the right to confront the people’s protests with violence, weapons or bullets with the excuse of countering chaos,” Khatami said. 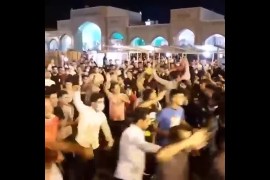 Officials blame rioters for the deaths that occurred in the Khuzestan province town of Shadegan. 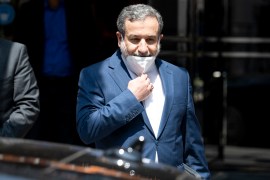 Tehran says it wants to agree prisoner exchange but the US and UK are linking it to talks on Iran’s nuclear programme. 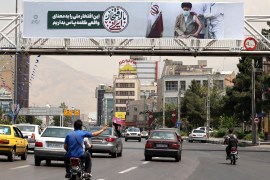 Iran locks down capital amid COVID surge ahead of Eid holiday