The United States has blocked former Honduran President Porfirio Lobo Sosa and his immediate family from travel to the US, alleging that he accepted bribes from drug traffickers, the US State Department announced on Tuesday.

“While in office, President Lobo accepted bribes from the narco-trafficking organization Los Cachiros in exchange for political favours,” US Secretary of State Antony Blinken said.

The designations under US law, “due to their involvement in significant corruption”, apply to former Honduras First Lady Rosa Elena Bonilla, who the US alleges misused “public funds for her personal benefit”, as well as to their children.

The State Department action announced on Tuesday is an indicator of the systemic corruption in Honduras from drug trafficking and illustrates the obstacles the Biden administration faces in addressing the root causes of migration from Central America.

“While their corrupt acts undermined the stability of Honduras’ democratic institutions, former President Lobo has not yet been convicted and Rosa Lobo has been released from prison awaiting a retrial,” Blinken said.

Lobo, a right-wing businessman and rancher before his election in a contested vote in 2009, is now being investigated on suspicion of laundering illegal drug money as part of a wider probe into his administration from 2010 to 2014, an international anti-corruption mission said in 2019.

His wife has been accused of misusing the equivalent of USD $779,000 in funds from international donations and public coffers meant for social programs during Lobo’s term and had been sentenced in Tegucigalpa to 58 years in prison before a judge in 2020 ordered a new trial.

In 2017, their son, Fabio Lobo, was sentenced in the US to 24 years in prison after pleading guilty to using his father’s position and his own connections with drug traffickers and corrupt police and government officials to bring huge quantities of cocaine into the US.

“These designations reaffirm US commitment to combating the corruption and disregard for the rule of law that hinders progress in Honduras,” Blinken said.

Human Rights Watch had criticised Lobo’s administration for failing to address abuses that took place during the 2009 military coup that led to his election and attacks against journalists and political opposition figures.

US prosecutors have described how drug money has infiltrated and controls the Honduran government.

In a federal court filing in New York in February, the US said Honduran President Juan Orlando Hernandez used Honduran law enforcement and military officials to protect drug traffickers as part of a plan “to use drug trafficking to help assert power and control in Honduras”.

In 2019, a US jury in New York convicted Hernandez’s brother on cocaine trafficking charges that included accepting bribes from Mexican drug kingpin El Chapo, now serving a life sentence in prison in the US.

Hernandez has warned that allegations by US prosecutors of his involvement with organised crime could affect Tegucigalpa’s cooperation with Washington in fighting drug trafficking and migration. 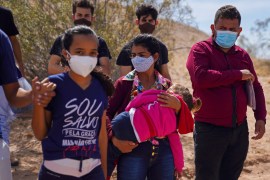 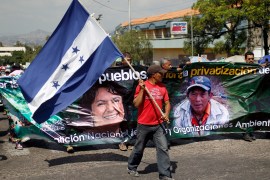 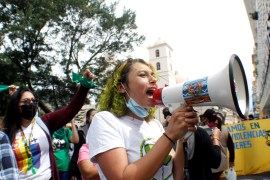 Honduran authorities say they are investigating the killings of activists Felix Vasquez and Jose Adan Medina.