In a turn of fortune for Jordan’s King Abdullah II, who has been dealing with a series of domestic and external crises, the 59-year-old monarch is set to become the first Arab leader to meet with US President Joe Biden when he visits the White House on Monday.

A staunch US ally, the king has ruled Jordan for the past 21 years but experienced difficult relations with Biden’s predecessor, Donald Trump, who he believed was sidelining his country from regional developments.

“There was no warm relation between Trump and the king,” Saud al-Sharafat, a former brigadier-general in the Jordanian General Intelligence Directorate, told Al Jazeera.

In 2017 the king told Trump his decision to recognise Jerusalem as the capital of Israel would have “dangerous repercussions on the stability and security of the region”, according to a palace statement.

Analysts say figures in Trump’s administration viewed the king as an obstacle to further deals.

The king is hoping for a better relationship with Biden.

“Jordan will be looking at a friend in Joe Biden,” Osama al-Sharif, an Amman-based political analyst, told Al Jazeera.

Biden’s administration has said they will not move the US embassy back to Tel Aviv, but will reopen its consulate general in Jerusalem, restoring ties with Palestinians.

“The president will publicly recognise the Hashemites’ special role in East Jerusalem and reinstate Jordan’s role as a key interlocutor in the Israeli-Palestinian conflict,” al-Sharif said.

“This visit puts wind in the sails of the king who has been under quite a bit of pressure,” Natasha Hall, a senior fellow with the Middle East programme at the Center for Strategic and International Studies, told Al Jazeera.

In April, Jordan was rocked by a sedition plot that authorities claim was aimed at unseating the monarch. A distant relative of the king and former senior adviser were recently sentenced to 15 years in prison for their role in plotting to replace the king with his half-brother, Prince Hamzah bin al-Hussein.

Prince Hamzah was placed under house arrest in April and has since pledged allegiance to his brother, but not before releasing videos in which he called out rampant corruption, a breakdown in governance, and creeping lack of political freedom in the kingdom.

Allegations that foreign powers were involved, or had knowledge of the plot, exposed tensions between Jordan and its ally, Saudi Arabia.

As head of the Hashemite royal family, King Abdullah is the official custodian of both Muslim and Christian holy sites in Jerusalem, which Jordan ruled until its defeat by Israel in the 1967 War.

Nearly half of Jordan’s 10.6 million population is of Palestinian origin and many Jordanians have strong familial ties across the border in the West Bank.

As the king prepares to visit the White House, Abdullah has not only outlasted Trump but also his close ally, former Israeli Prime Minister Benjamin Netanyahu, with whom he reportedly had an antagonistic relationship.

Before leaving on his US trip, King Abdullah met secretly with the new Israeli Prime Minister Naftali Bennet in Amman, according to multiple Israeli media reports. Coinciding with this meeting, the countries’ two foreign ministers agreed to a deal that saw Israel double its sale of water to the resource-poor kingdom, and allow for an increase in Jordanian exports to the West Bank.

While the palace intrigue and neighbouring rivalries have garnered much international attention, the king also faces rising discontent at home over corruption and a stagnating economy.

“The economy is going to top the list of discussions,” Sharafat said. “We are in a very bad situation where every aspect of life has been affected by the economic crisis.”

Jordan’s economy has been deteriorating for a number of years. Gross domestic product (GDP) per capita has been more or less declining since 2009.

The economy is simply not growing fast enough to create enough jobs for the country’s swelling population. Jordan has one of the lowest official labour force participation rates in the world. Legions of workers toil in the informal economy, where they lack job security and benefits.

The pandemic has only worsened these economic challenges, crushing tourism that accounts for 20 percent of GDP and hammering remittances from the Gulf after oil prices crashed in 2020. By the final quarter of last year, unemployment reached a blistering 24.7 percent.

Jordan is also dealing with an influx of refugees from neighbouring conflicts, hosting nearly 1.3 million Syrians from its war-ravaged neighbour.

Foreign aid is crucial to supporting the country. The US is Jordan’s largest donor, contributing more than $1.5bn in 2020. The level of US aid tops the amount provided to Egypt, another US ally in the region with a population 10 times the size of Jordan.

The king is expected to seek more support, but some analysts say there are limits to how much more the US will provide. Even with strained relations under the Trump administration, the country was given an increase in aid in 2018 – an additional $1.3bn over five years.

“I don’t see much hope of military and economic assistance increasing. We have really reached the peak in terms of assistance that we could receive from the US,” Oreib Rantawi, director of the Amman-based Al Quds Center for Political Studies, told Al Jazeera.

Many ordinary Jordanians say the country is plagued by high levels of corruption that have seeped into nearly every aspect of life. And while external shocks have certainly weighed on the economy, it has larger structural issues to address.

The social contract maintaining stability in the resource-poor kingdom revolves around a vast patronage system in which Jordanian tribes support the Hashemite monarchy, and in return are provided with public sector salaries.

Even with steps taken to address public spending as part of its IMF loans, Jordan’s 2021 budget shows how entrenched the system is. This year, 65 percent of total state spending is dedicated to public sector salaries and pensions, and 17 percent is earmarked to service the skyrocketing debt.

Hall said a potential discussion between Jordan and the Biden administration may seek to link aid to political reform in a country that recently slid in the Freedom House Index from “partially free” to “not free”.

“I don’t think it will be a confrontational approach, it will be more friend to friend,” she said of possible efforts by Washington to get Jordan to address political reforms that have recently stalled.

Following the sedition plot, King Abdullah appointed a 92-member reform committee, but its scope was limited to the country’s election laws and many critics claim it is a half-hearted attempt by the government to push talk of meaningful change down the road.

“The current system is not sustainable,” Sharafat said, adding, “It may not be in public view but I believe the king will hear criticism in DC of the way things are being handled internally.”

Rantawi said the Biden administration’s focus on human rights offers reformers in the kingdom an opportunity but emphasises the need for genuine efforts.

“It shouldn’t just be to please the newcomer in Washington DC. It is our duty and it is in Jordan’s own interest to enact systemic democratic reforms,” he said.

Grievances around political and economic issues will likely continue to plague Jordan as the United States’ focus on terrorism recedes and Washington reassess its commitments in the region in order to address great-power threats from China and Russia.

While the last few months have looked bleak for Jordan, the changes convulsing the region also offer opportunities. King Abdullah II met with his Egyptian and Iraqi counterparts in Baghdad this month as the three countries look to deepen cooperation on economic and security issues.

“I think the US is going to look for dependable agents to handle some files in the region, and I see Jordan gaining more importance for the US,” Rantawi said.

The challenge for Jordan will be to leverage its stability and the trust Western states have in it to create more opportunities for its people. If it can, the Hashemite monarchy known for its staying power may find its solid footing in the new Middle East. 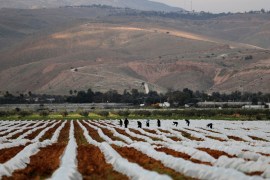 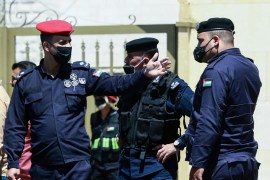 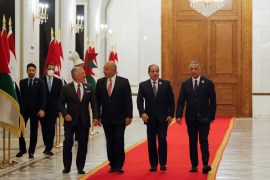 Tripartite summit marks the first official visit by an Egyptian leader to Iraq since the first Gulf War. 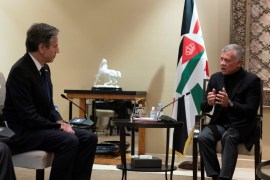