Cuba’s President Miguel Diaz-Canel has denounced what he said was a false narrative over unrest on the Caribbean island, speaking alongside ex-president Raul Castro during a rally before thousands of supporters in Havana.

“What the world is seeing of Cuba is a lie,” Diaz-Canel said on Saturday, denouncing the dissemination of “false images” on social networks where they “encourage and glorify the outrage and destruction of property.”

On July 11 and 12, thousands of Cubans took to the streets in 40 cities around the island shouting “Freedom,” “Down with the dictatorship,” and “We’re hungry.”

One person has died and more than 100 have been arrested, including independent journalists and opposition activists, since the protests broke out over the worst economic crisis in decades.

There is an “overflowing hatred on social networks,” the president said.

Translation: [Stop the] lies, infamy and hatred. #Cuba is deeply allergic to hatred. And it will never be a land of hatred! Nothing good is built out of hatred. Hate robs us of time to love and even love itself. TO #Cuba, #Putyourheart, Diaz-Canel tweeted.

Protesters took to the streets in towns around Cuba last Sunday to protest against power outages, a COVID-19 surge, widespread shortages of basic goods and the one-party political system.

Those protests, the biggest in decades in Cuba – where public dissent is restricted – petered out this week as security forces were deployed and government supporters mobilised.

Cuba cut off internet access on the island on Sunday and restored it on Wednesday, but access to social media and messaging apps such as Facebook, WhatsApp and Twitter remained blocked on 3G and 4G networks.

Diaz-Canel, who accuses the United States of having provoked the protests, said the “lie” was not committed “by chance or mistake; all this is the cold calculation of an unconventional-war manual”.

“Born to conquer and not to be conquered!” shouted the crowd at the rally, which had gathered at dawn on the Malecon, Havana’s famed oceanfront boulevard.

Castro, 90, was drawn out of retirement by the gravity of the protests.

Shortly before the rally began, police arrested a man who shouted “Patria y Vida” (“Homeland and Life”), the title of a protest rap song that became the anthem of the anti-government demonstrators, according to AFP news agency. 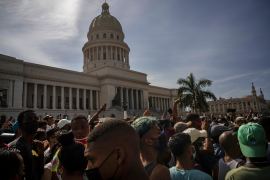 Government announcement comes after island-nation was rocked by rare protests. 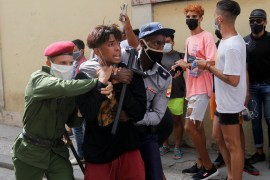 At least 100 people have been arrested and one person killed during rare demonstrations in the island nation. 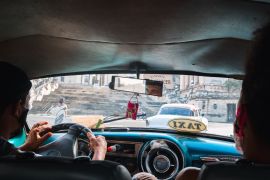 Cuba’s economy shrank by 11 percent in 2020, the sharpest contraction since the collapse of the Soviet Union.