The annual Hajj pilgrimage has kicked off in Saudi Arabia with only a few thousand people gathered on the Plain of Arafat on Monday for the start of the five-day-long rituals.

The Hajj is one of the five pillars of Islam and a once-in-a-lifetime duty for all able-bodied Muslims to perform if they can afford it.

In the years before the pandemic, about 2.5 million pilgrims from across the world flocked to Islam’s holiest site to attend the Hajj.

But because of coronavirus-related restrictions on large gatherings, no foreign pilgrims have been allowed to perform the Hajj again this year.

“I feel very lucky and truly blessed to be among the few people who’ll be performing the Hajj this year,” Amina told Al Jazeera.

The 50-something-year-old Saudi resident said she was going on the Hajj with a group of other women, after Saudi Arabia allowed females to register for the pilgrimage without a male guardian for the first time ever.

Despite the restriction on the number of pilgrims, the Saudi Ministry of Hajj and Umrah said more than 450,000 people in the kingdom sent an application within 24 hours of the registration platform opening last month.

Priority was given to people who have not performed Hajj in the past five years, and those over the age of 50 who have not previously been on Hajj.

Seif, a 40-something-year old Saudi resident, was planning to perform the pilgrimage this year but found the available packages unaffordable.

Although Seif said he appreciated that the authorities increased prices because of additional health and safety regulations and precautionary measures required to contain the spread of the pandemic, he felt the prices were extortionate.

“The Hajj will only be for rich people this year,” said Seif, who also criticised restrictions on the number of people allowed to attend.

“They should have allowed at least double the number of people. The space in which the pilgrimage is performed is huge. I think it can safely accommodate more people,” he said.

Like Saif, Ibrahim cancelled plans to perform the Hajj with his wife this year because of the packages’ high prices. Still, he wished he could have attended.

“A place that usually welcomes millions will only have a few thousand,” Ibrahim told Al Jazeera. “If I had the money, I would’ve definitely gone – Hajj this year will be easy, organised and simply a luxurious experience.”

Saudi Arabia’s deputy health minister Hani Jokhdar said at a WHO briefing last month the decision to restrict participation was for the “greater good” as they “don’t want the Hajj this year to turn into an infection hotspot”.

Saudi Arabia has built a reputation for successfully managing large crowds as the frequency of major incidents during the Hajj season significantly decreased in recent years.

Although crowding will not likely pose a challenge for Saudi authorities this year, the kingdom was adamant to ensure infection rates are contained during the Hajj.

Only people who received Pfizer, Astrazeneca, Moderna or Johnson & Johnson vaccines were able to take part in the Hajj. Pilgrims were tested for the coronavirus before arriving in the holy city of Mecca.

Authorities also assigned every 20 pilgrims a health official to guide the group and monitor their adherence to strict health and safety regulations.

Access to holy sites at Mina, Muzdalifah and Mount Arafat will be limited to those with Hajj permits.

Physical distancing between each pilgrim during the rituals including during mass prayers and while circling the Kaaba will be strictly imposed, according to a statement by the Centres for Disease Prevention and Control (CDC).

Ahead of the pilgrimage, the Ministry of Hajj and Umrah built additional accommodation and launched a project to regulate high-frequency transport routes for the pilgrims, reported Saudi media.

It also launched an electronic portal for pilgrims to buy all the services and packages required for the rituals, and a smart card to organise activities, including guiding pilgrims between their accommodation and sites of various rituals. 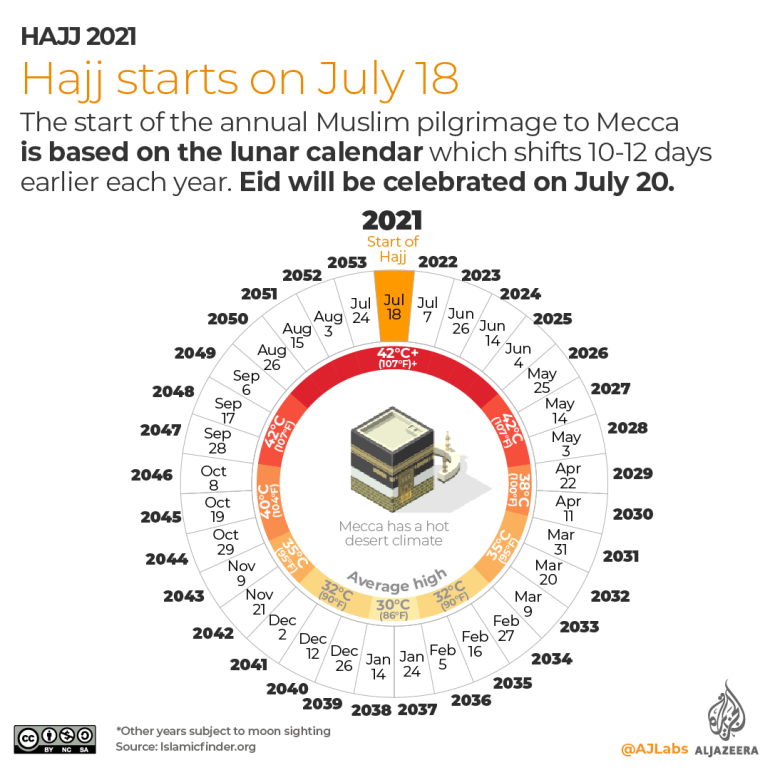 The first day of the Muslim pilgrimage to Mecca will be on Sunday July 18, as announced by Saudi Arabia’s High Judicial Court.

For Muslims, Hajj re-enacts the actions of Prophet Muhammad’s “farewell pilgrimage” in 632 AD. It also hearkens back to the time of Prophet Abraham, who Muslims believe built the Kaaba, along with his son Ismail.

With pilgrims coming from across the globe all dressed in simple cloth, the Hajj strengthens the bonds of brotherhood among Muslims and removes markers of class, wealth and materialism.

Muslims ultimately perform the Hajj with the aim of cleansing their souls and reviving their relationship with God.