A voting rights demonstration by Black women leaders at the United States Capitol has ended with the arrest of the chair of the Congressional Black Caucus.

Representative Joyce Beatty was accompanied by dozens of demonstrators who marched to the US Senate on Thursday to demand the passage of federal voting-rights legislation.

Police responded when the group gathered in the atrium of the Senate building and began making arrests after some demonstrators, including Beatty, refused to vacate.

“Let the people vote,” Beatty wrote on Twitter after her release, along with a picture of a Capitol police officer putting her plastic handcuffs. “Fight for justice.”

“We have come too far and fought too hard to see everything systematically dismantled and restricted by those who wish to silence us,” Beatty tweeted in a subsequent post.

She included the hashtag #GoodTrouble, a reference to former Congressman and civil rights icon John Lewis, whose activism led to the Voting Rights Act of 1965, which sought to combat discriminatory practices in voting. Subsequent Supreme Court rulings have rolled back the scope of the legislation.

Rep. Beatty arrested for fighting for voter rights, yet there are members of Congress who participated in the Jan 6 insurrection still walking the halls of Congress. #DoubleStandards https://t.co/aEfzlHizKZ

Meanwhile, pressure has grown for the Senate to pass the For the People Act, federal legislation that seeks to expand voting access and ban partisan gerrymandering. The House, where US President Joe Biden’s Democratic Party holds a tenuous majority, passed the bill in March, but Republicans have used the legislative hurdle known as a filibuster to block its passage in the Senate.

On Tuesday, Biden called the state-level voting laws “a new wave of voter suppression and raw and sustained election subversion”. 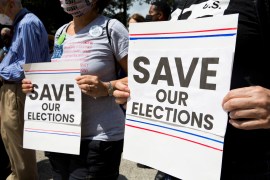 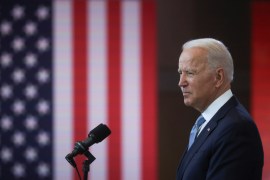 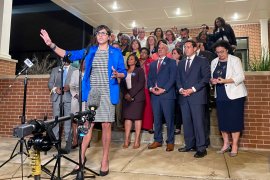 As the party tries to stall a restrictive GOP voting bill, President Biden is set to address voting rights Tuesday.