Travellers arriving in Cuba will be able to bring in food, medicine and other essential items without having to pay a customs fee, the government has announced, its first apparent concession after days of rare protests in the Caribbean island nation.

Prime Minister Manuel Marrero made the announcement in a televised address alongside President Miguel Diaz-Canel on Wednesday night, days after demonstrators first took to the streets on Sunday.

“It was a demand made by many travellers and it was necessary to take this decision,” Marrero said of the easing of customs restrictions on food, medicine and hygiene products.

It was not immediately clear how much immediate difference the move would make given that there are very few flights at the moment into Cuba which is going through its worst coronavirus outbreak since the start of the pandemic.

Under Cuban law, travellers arriving in the country can bring up to 10kg (22 pounds) of medicine tax-free. They can also bring in limited amounts of food and personal hygiene goods but must pay customs duties.

Those limits and duties will be lifted starting on Monday, Marrero said.

Anger has grown in the country over shortages of basic goods, electricity outages, curbs on civil liberties and the government’s handling of a surge in COVID-19 infections.

The hardships have been exacerbated by a decades-old United States trade embargo tightened amid the pandemic under former President Donald Trump. Those policies remain under review by the administration of President Joe Biden.

Cuban leaders have blamed the protests on US-financed “counter revolutionaries” and a social media campaign that exploits the dire situation created by Washington’s embargo.

Pro-government demonstrations have also occurred amid the unrest.

For his part, Diaz-Canel on Wednesday again blamed the US for the unrest, but for the first time acknowledged that government shortcomings played a role.

“We have to gain experience from the disturbances,” he said. “We also have to carry out a critical analysis of our problems in order to act and overcome, and avoid their repetition.”

He called for “peace, harmony among Cubans and respect”, adding: “Also perhaps it will be necessary to apologise to someone who, in the midst of the confusion that arises in events like this, may have been confused, has been mistreated.”

More than 200 people were detained during or following the protests, according to exiled rights group Cubalex, and only a handful have been released so far.

Cuban officials, who have accused protesters of vandalism and looting, have not released official numbers of the arrests, but have acknowledged one death.

Interior ministry officials said on Wednesday that some of the detained would be pursued for crimes such as incitement to violence, contempt, robbery and damage to public property, which carry lengthy prison sentences. 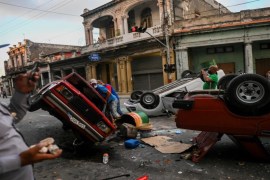 Protests in Cuba: Should the government be worried?

There is growing public anger in Cuba and the government is being blamed for the economic collapse. 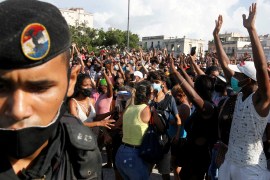 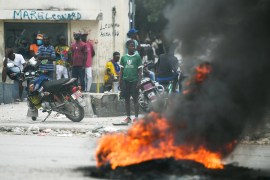 Mobile internet has been a key factor behind the protests; activists say gov’t is restricting access to messaging apps.