At least 12 people, including nine Chinese citizens, have been killed after a bus carrying construction workers in Pakistan’s far north plunged into a ravine following an explosion, the Pakistani foreign ministry said.

The incident took place as a bus carried workers to the Dasu hydropower project in northern Khyber Pakhtunkhwa province, about 190km (118 miles) north of the capital, Islamabad, on Wednesday morning.

The cause of the explosion was not immediately clear, with the Pakistani foreign ministry saying it took place due to a “mechanical failure”, while a Chinese foreign ministry spokesperson referred to it as an “attack”.

Local police and administration officials told Al Jazeera that the cause of the explosion was still being investigated. 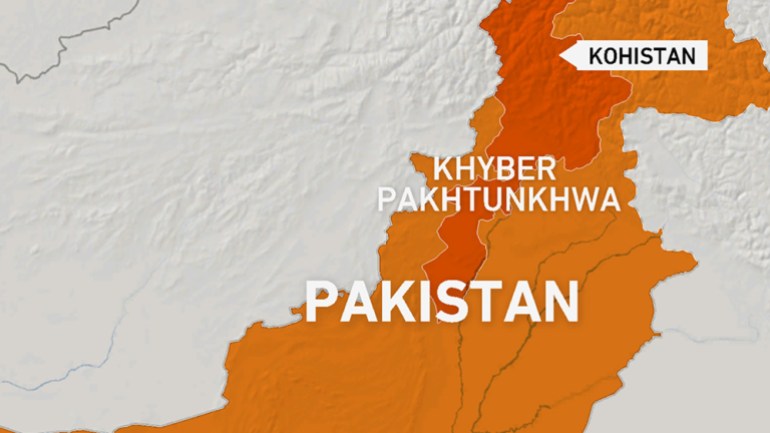 “This morning a bus carrying Chinese workers in Khyber Pakhtunkhwa Province, plunged into a ravine after a mechanical failure resulting in leakage of gas that caused a blast,” said a statement from Pakistan’s foreign ministry.

Chinese authorities referred to the cause of the explosion as an “attack” and called for a full investigation by Pakistani law enforcement.

“Recently, our workers at a business on a certain project in Pakistan were attacked and have suffered deaths and injuries,” said a statement from the Chinese foreign ministry, according to the Associated Press news agency.

“We have notified Chinese citizens in Pakistan to avoid venturing outside unless required by work or business and pay special care to their safety.”

“We mourn over the Chinese and Pakistani personnel killed in the attack and express sympathies to bereaved families and the wounded,” Zhao said during a daily news briefing.

“We have demanded the Pakistani side get to the bottom of the incident, arrest and strictly punish the assailants as soon as possible, and earnestly protect the safety of Chinese personnel, institutions and projects in Pakistan,” Zhao added.

The Dasu hydropower project is part of the $60bn China-Pakistan Economic Corridor (CPEC), an extensive programme of infrastructure and trade development between the two countries that has seen China construct several power plants in the South Asian country.

Road accidents are common in the far north of Pakistan, where the incident took place, with treacherous roads with little or no safety barriers snaking through the Karakoram and Himalayan mountain ranges.