Police in Bangladesh have arrested on murder charges the owner of a factory where at least 52 people died in a massive fire, as it emerged that children as young as 11 had been working there.

Four of the owner’s sons were also among the eight people detained overall on Saturday over the inferno that broke out on Thursday and raged for more than a day. A separate inquiry has been launched into the use of child labour at the facility.

Emergency services told Al Jazeera they had recovered 49 of the bodies at the Hashem Food and Beverage factory in Rupganj, an industrial town 25km (15 miles) east of the capital, Dhaka. Three people also died after jumping out of the building.

The charred victims were piled in a fleet of ambulances and taken to mortuaries amid anguished shouts and tears from people watching in the streets.

Jayedul Alam, police chief for Narayanganj district where the factory is located, said the entrance had been padlocked at the time of the blaze and the factory breached multiple fire and safety regulations.

“It was a deliberate murder,” the police chief told the AFP news agency.

A fire services spokesman also said the exit door to the main staircase had been padlocked. Highly flammable chemicals and plastics had also been stored in the building.

Al Jazeera’s Tanvir Chowdhury, reporting from outside the factory in Rupganj, said authorities had moved swiftly, noting that it usually takes “several days or weeks” before arrests are made.

“The Rupganj police have filed a murder case against them,” Chowdhury said, referring to those in custody.

Authorities said the rescue operation was over. However, Chowdhury said, some employees were still missing, according to their relatives.

Meanwhile, Monnujan Sufian, state minister for labour, said inquiries had begun into the use of child workers at the factory.

Sufian told AFP she had spoken at a hospital to two survivors aged 14. One woman said her 11-year-old nephew had been working at the factory and was missing.

Nazma Akter, founder and executive director of the Awaj Foundation for workers’ rights, told Al Jazeera safety negligence was routine in Bangladeshi factories – and children especially suffer from a lack of protection.

“It is very sad and very disappointing that many children also died in the fire incident,” Akter said.

“We have [a] law, if there is a young worker or a child worker, [it should be] five hours of work, three hours education but … they are working as the adult workers – 10 to 12 hours, seven days a week,” she added.

“Nobody cares about the workers’ life and safety issues.”

Bangladesh pledged reforms after the Rana Plaza disaster in 2013 when a nine-storey complex collapsed killing more than 1,100 people.

But there have been a series of fires and other disasters since then. In February 2019, at least 70 people died when a fire ripped through Dhaka apartments where chemicals were illegally stored. 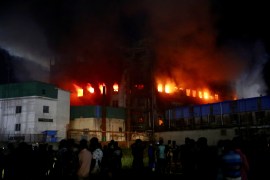 At least 43 killed; many of the 30 injured leapt for their lives from the upper floors of the complex. 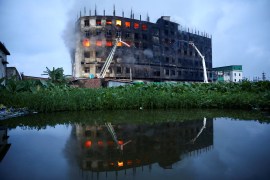 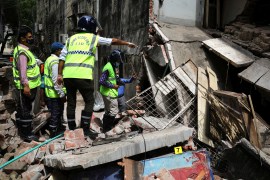