Beirut, Lebanon – When the results of the Lebanese engineers’ syndicate election were announced on Sunday, a large group of engineers and activists gathered at its Beirut headquarters erupted in celebration.

A coalition of grassroots activists and political groups had just decisively won against all odds.

“It feels amazing. I didn’t expect this victory,” said Abir Saksouk, an architect among those elected. “We did expect to make a breakthrough of some sort because we had so many opposition candidates for the first time in the syndicates’ history – but nothing like this.”

The coalition, dubbed The Syndicate Rises, amassed 7,650 votes, effectively controlling six of the syndicate’s seven branches. A broad alliance of the country’s otherwise wrangling political parties clinched the other branch, which represents architects and engineers working at state institutions.

This coalition’s sweeping victory is the second of its kind in Lebanon since an uprising against a ruling class of sectarian elites rocked the country in October 2019. The Beirut Bar Association had also beaten candidates that represented the country’s traditional political powers to elect an independent leader in November 2019.

The result came amid increasing frustration in Lebanon, a country reeling from an economic crisis that has plunged more than half the population into poverty, with the local currency having lost well above 80 percent of its value against the United States dollar in less than two years.

Saksouk, who has worked for years on a slew of issues, from housing rights to public spaces, now hopes that the rest of the country’s syndicates and unions – for decades under the thumb of sectarian political parties – can be “reclaimed” and become effective again.

It was an even sweeter victory for Paul Naggear, an electric engineer who also ran with The Syndicate Rises.

“For the first time since August 4, we felt a sense of relief,” he said.

On that day, nearly 11 months ago, a massive explosion at Beirut’s port flattened much of the Lebanese capital, killing some 200 people and wounding more than 6,500 others.

Naggear lost his three-year-old daughter, Alexandra, to the explosion.

The disaster was seen as the deadly byproduct of years of corruption and neglect in Lebanon, with the authorities leaving more than 2,700 tonnes of a mysterious shipment of explosive ammonium nitrate in the port for several years.

Almost one year later, the state-led investigation continues to stall, leaving thousands like Naggear wondering if they would ever see justice.

“When you can’t find justice, you have to take on another battle,” he said. “But for the first time, my wife and I, after seeing the results, felt there was a battle we could win.”

Syndicates in Lebanon cannot pass laws, but The Syndicate Rises has promised to work towards improving working conditions for engineers and architects, as well as break the hold of a handful of contracting companies that dominate the market and reform unjust building codes to improve access to housing.

Some believe the victory will also give the grassroots activists greater freedom amid an entrenched system of clientelism and political patronage.

Bassel Salloukh, a professor of political science at the Lebanese American University, said syndicates and other civic spaces have been co-opted by Lebanon’s ruling elite after the end of the country’s 15-year civil war in 1990 to suffocate any forms of viable opposition.

“All this has meant that after the October 17 protests, the invention of new sites for political opposition has to necessarily be incremental and strategic,” Salloukh said.

“One small victory at a time in those sites that form the soft underbelly of the sectarian system.”

Looking ahead, members of the winning coalition hope to also score a victory this month, when engineers and architects vote for the syndicate’s new head.

A young woman’s artistic dreams cut short by the 2020 Lebanon explosion is being carried further by her mother. 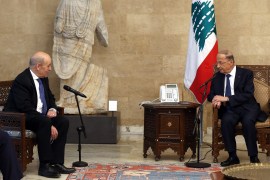 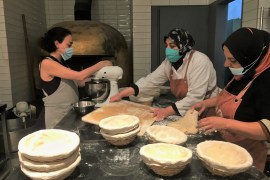 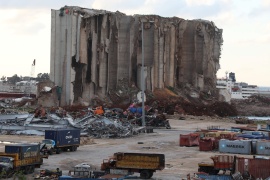 HRW documented flaws in the investigation, including political interference and violations of due process.