The Palestinian Authority justice minister and head of the investigation committee into the death of activist and dissident Nizar Banat says Banat was subjected to physical violence and his death was “unnatural”.

In an interview with the official Palestine TV, Mohammed al-Shalaldeh said the initial medical report about the death of 43-year-old Banat on June 24 indicated he was subjected to physical violence.

The activist died during his arrest by PA security forces in the occupied West Bank city of Hebron. Al-Shalaldeh said Banat lost consciousness during his transfer to the Palestinian Authority preventive security centre.

Members of the security force, al-Shalaldeh continued, transferred Banat to Alia Governmental Hospital in Hebron in their vehicles, but he was pronounced dead on arrival after testimonies showed he was alive during his arrest from his house.

The minister concluded that the cause of death of Banat – who was one of the fiercest critics of the Palestinian Authority – was neurological shock, which resulted in acute heart and pulmonary failure.

Al-Shalaldeh also said the incident was an exceptional case, and not part of a pattern carried out by the PA against its critics.

The investigation committee, according to al-Shalaldeh, carried out its work “objectively, impartially and confidentially”, and its report has now been handed over to PA Prime Minister Mohammed Shtayeh who in turn will pass it on to the head of the military judiciary in order to take legal measures and investigate suspects.

However, Banat’s family has rejected the investigation committee’s findings and said the body did not speak to nor take the testimonies of any of the family members or witnesses who were with Banat at the time of his arrest and assault.

According to an initial autopsy, Banat was beaten on the head, chest, neck, legs and hands, with less than an hour elapsing between his arrest and his death.

Banat’s family accused the PA security forces of assassinating him.

On Monday, Banat’s father called for the security forces involved in the arrest of his son to be publicly tried.

“Nizar was killed after being dragged from his bed, and all the forces that carried out his arrest and murder under the cover of darkness should be brought to a public trial,” Khalil Banat said in a press conference.

The protests were violently suppressed by PA security forces and plainclothes policemen, resulting in several international and human rights bodies expressing their concern over the actions of the security forces, particularly over their attacks on journalists.

The Office of the United Nations High Commissioner for Human Rights in the occupied Palestinian territory said one of its rights monitors covering protests in the West Bank city of Ramallah was among dozens of people who had been attacked in a “totally unacceptable way”.

“The attack, by persons in civilian clothes, included punching, the use of pepper spray, and attempts to steal a phone being used to document events,” it said on Facebook. 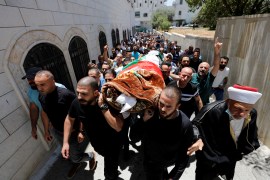 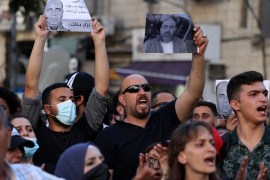 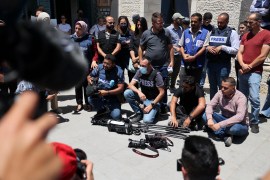