By Hosam Salem and Linah Alsaafin

Gaza City, Gaza – On May 19, shortly after midnight, a reconnaissance missile tore through the roof of the Muhareb family home in Rafah in the south of the besieged Gaza Strip.

Two minutes later, an Israeli warplane dropped another missile, which crashed through two storeys of the house, but somehow did not explode.

“My brother and his family, who live on the second floor, were all injured from the reconnaissance missile,” Waseem Muhareb told Al Jazeera. “My four-month-old baby was in a coma for two days, and my eight-year-old niece Layan was in the intensive care unit for 10 days with burns all over her body.”

The extended Muhareb family home, inhabited by 36 adults and children, was ruined. The second missile had crashed through one of the children’s bedrooms before landing on the first floor.

“There was no warning,” said Waseem, whose family is now living in rented accommodation nearby. “The entire ordeal happened within the space of three minutes.”

The following day, the bomb disposal squad arrived and removed the unexploded ordnance as well as the remnants of the reconnaissance projectile.

The squad, which operates under the interior ministry, has carried out 1,200 missions to to neutralise, defuse and destroy unexploded warheads and dangerous munitions in residential areas of Gaza since May 10, when Israel began an 11-day bombardment of the coastal enclave.

The escalation in violence followed a crackdown by Israeli forces on protesters at the Al-Aqsa Mosque compound in occupied East Jerusalem. Hamas, the Palestinian group that rules Gaza, issued an ultimatum for Israeli forces to withdraw from the area around the holy site, which is also sacred to Jews, who call it the Temple Mount.

After the ultimatum expired, Hamas fired several rockets towards Jerusalem and shortly afterwards Israel launched air raids on Gaza. The Israeli bombardment continued for 11 days and killed at least 260 Palestinians, including 66 children, according to health authorities. Rockets fired by armed groups in Gaza killed at least 13 people in Israel. Hamas and Israel agreed to a ceasefire on May 21.

The bombardment of Gaza caused widespread damage to infrastructure, including the destruction of 1,800 housing units, 74 public buildings, 53 educational facilities, and 33 media offices. The damage to a water desalination plant has also left more than 250,000 Palestinians without clean drinking water.

Captain Mohammed Meqdad, an explosives engineer at Gaza’s interior ministry, told Al Jazeera that the 70-person bomb disposal squad has not suffered a casualty during their work since May 10, despite a lack of vital protective equipment.

“The team doesn’t have protective vests or high-tech equipment that can reveal the presence of explosives,” Meqdad said. “They only have simple equipment, like a toolbox that can be found in almost every household.”

The engineer said that under a crippling 13-year Israeli blockade of Gaza, the entry of protective equipment used by bomb disposal teams in Gaza has been prohibited.

Meqdad said the main risk associated with the job during the Israeli offensive was the possibility that the team could be targeted.

“The second risk is the type of munitions Israel dropped, how dangerous they are, and whether the assigned technician could gauge all of that with the rudimentary equipment at his disposal,” Meqdad said.

The final step in the process of collecting and neutralising unexploded munitions is to transfer them to the central warehouse, located in Rafah, in preparation for their destruction.

Meqdad said that the recent offensive witnessed a new type of weaponry used for the first time on the Gaza Strip – the GBU-31 and GBU-39 Joint Direct Attack Munition (JDAM) explosives. Developed to penetrate heavily fortified military sites, the two-tonne explosives were used in levelling high-rise buildings that housed residential apartments, as well as commercial and media offices.

The bomb disposal squad was established in 1996 when the Palestinian Authority ruled Gaza. The first team was given a course by experts from the United States, and in 2006, the team was strengthened by the addition of more engineers and technicians.

Following the deadly 2008-2009 Israeli offensive on Gaza, the UN Mine Action Service (UNMAS) began its operations in addition to training the ministry of interior’s bomb disposal squad.

Meqdad said new recruits to the bomb disposal squad receive their training from current employees, based on their own years of experience working in the field.

“During the past 10-11 years, no one working in this field has left Gaza to receive training outside,” he said.

‘Every day can be your last’

Asad al-Aloul, who has been the head of the bomb disposal squad for the past eight years, said their work is the most dangerous within the security division, which includes the police and internal security agencies.

“Choosing to work in this field is our choice and a mark of honour as we remove any harm and dangers that threaten our citizens,” he told Al Jazeera.

“Merely working in explosives engineering means you are a martyr,” he added. “Every day you leave to your job can mean your last day on earth, because any mistake means it will be the last mistake you make – no exceptions.”

In 2014, three technicians from the bomb disposal squad were killed, in addition to a foreign journalist and a Palestinian translator present at the scene, after an attempt at defusing a missile in northern Gaza.

Despite the risks of the job, al-Aloul said he has not considered stopping work.

“Who else will take over and protect our children from injuries or death, knowing all these risks?” he said. “We work in order to provide a better future for the upcoming generation so that they won’t have to live with amputations caused by an exploding missile or bomb.”

“Every day you see death, but the saviour is God. It is an honour to die while defending our people.” 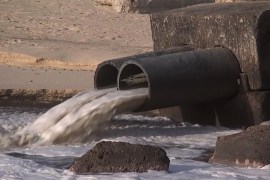 “There is nothing except the sea and now it is polluted.” 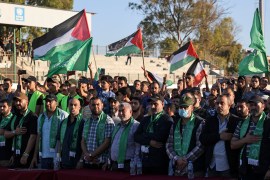 The latest confrontation with Israel saw Hamas emerge victorious and Fatah appear weaker than ever. 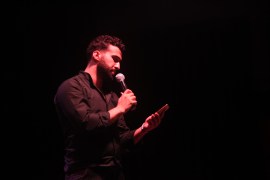 ‘Growing up in Gaza is inspiring for poets – life here is poetry blown into pieces and scattered all over the place.’