UN appeals judges have upheld the convictions of former Bosnian Serb military chief Ratko Mladic for genocide and other offences during Bosnia’s 1992-95 war, and confirmed his life sentence.

Tuesday’s verdict by five judges at the UN International Residual Mechanism for Criminal Tribunals at The Hague was final and cannot be appealed any further.

Twenty-six years after the Srebrenica massacre, the decision brings to a close the last Bosnian genocide trial before the court.

It also rejected an appeal by prosecutors of Mladic’s acquittal on one other count of genocide linked to ethnic purges early in the war.

Once a swaggering military strongman known as the “Butcher of Bosnia”, Mladic commanded troops responsible for atrocities ranging from “ethnic cleansing” campaigns to the siege of Sarajevo and the war’s bloody climax in the 1995 Srebrenica massacre.

Srebrenica, which saw more than 8,000 Muslim men and boys killed, remains the only episode of genocide on European soil after World War II.

For the Srebrenica genocide, the judges determined that Mladic had an absolutely pivotal role as he controlled both the military and police units involved in the round-up and massacre.

“The accused’s acts were so instrumental to the commission of the crimes that without them, the crimes would not have been committed as they were,” the court found.

Mladic, now a frail elderly man whose ill health delayed Tuesday’s final judgment, was convicted in 2017 on charges of genocide, crimes against humanity and war crimes and sentenced to life imprisonment.

His lawyers had appealed his conviction, arguing the former general could not be held responsible for possible crimes committed by his subordinates.

They asked for an acquittal or a retrial.

Widows and mothers of victims were outside the court as the judgment was made.

It comes after 25 years of trials at the now-closed International Criminal Tribunal for the former Yugoslavia (ICTY), which convicted 90 people.

Jasmin Mujanovic, a political scientist who specialises in southeastern European affairs, welcomed most of the developments, but criticised judges for rejecting the prosecutors’ appeal on the other count of genocide.

“The court has again failed to recognise that the genocide in Bosnia was not localised to Srebrenica,” Mujanovic tweeted. “But he’ll [Mladic] leave the world alone, caged. A kinder death than he gave his victims.”

Al Jazeera’s Step Vaessen, reporting from The Hague, said Tuesday’s verdict marked a “great relief for all the people who had been working on the tribunal, but … especially for all those who lost their loved ones in the war”.

She said the ruling would also be welcomed by lawyers and experts who feared that an acquittal would have signalled a setback for international justice.

While Ratko Mladic has been found guilty of genocide in Srebrenica and his initial sentence has been upheld, unfortunately the initial ruling on the other municipalities has also been upheld noting war crimes, murder, and persecution. Our thoughts are with the survivors of Bosnia

To Serbs in Bosnia, he is a war hero who fought to protect his people.

To Bosniaks, mostly Muslims, he will always be a villain responsible for their terrible wartime suffering and losses.

Srdjan Stankovic, a Serbian veteran of the 1992-1995 Bosnian conflict, said Mladic’s supporters would “not abandon him”.

“If we can defend him, and save him, we will. We created the republic together and nobody can deny it to us,” Stankovic told Al Jazeera.

Fikret Grabovica, whose 11-year-old daughter was killed during the siege of Sarajevo, told Al Jazeera laws should be passed to “ban the glorification of criminals and the promotion of them as heroes.”

“People like Mladic should simply go down in history as one of the greatest criminals ever.”

The shadow of Mladic and Karadzic spreads far beyond the Balkans. They have also been revered by foreign far-right supporters for their bloody wartime campaigns against Bosniaks.

The Australian who shot dead dozens of Muslim worshippers in Christchurch, New Zealand, in 2019 was believed to be inspired by the wartime Bosnian Serb leaders, as well as Anders Breivik, the Norwegian white supremacist who shot dead 77 people in Norway in 2011. 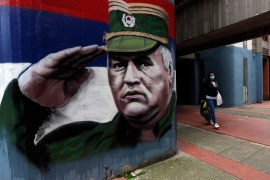 In Montenegro, a street was almost named after Ratko Mladic

Proposal was ultimately dropped, but observers say the move is a sign of how Serb Chetniks continue to be glorified. 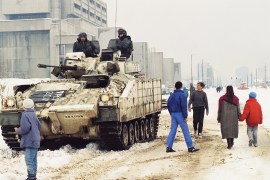 From the use of armoured cars and flak jackets to digital technology and live satellite broadcasts. 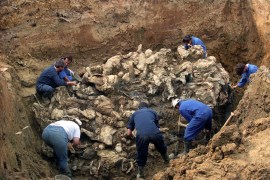 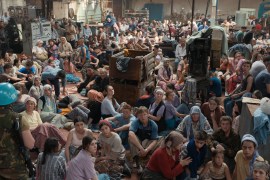