Israel’s outgoing government has said a controversial march by far-right nationalists and pro-settler groups through occupied East Jerusalem’s Old City will go ahead next week, a decision taken a day after the event was scrapped due to security concerns.

Several right-wing Israeli groups had planned a so-called “March of the Flags” through the walled Old City’s Damascus Gate and into its Muslim quarter on Thursday, drawing warnings from Hamas – the group that governs the besieged Gaza Strip – of renewed hostilities should it proceed.

The far-right groups cancelled the march after police denied them a permit. But following a meeting of Prime Minister Benjamin Netanyahu’s cabinet on Tuesday, his office said ministers had approved the march to be held next week.

“The parade will take place this coming Tuesday (June 15) in a format to be agreed between the police and the parade’s organisers,” a statement from Netanyahu’s office said.

A top Hamas official, Khalil al-Hayya, had warned Israel on Monday “against letting the march approach East Jerusalem and the Al-Aqsa Mosque compound”.

“We hope the message is clear so that Thursday doesn’t become [a new] May 10,” he said, referring to the start of last month’s 11-day fighting between Israel and Hamas.

The Israeli raids on Gaza come after weeks of mounting tension about the looming forced displacement of several Palestinian families from Sheikh Jarrah, a Palestinian neighbourhood in occupied East Jerusalem that Jewish settlers have been trying to expel them from for decades.

The situation escalated when Israeli police stormed Al-Aqsa Mosque in Jerusalem’s Old City – the third-holiest site in Islam – and injured hundreds of Palestinian worshippers during several days of violence.

Al Jazeera’s Harry Fawcett, reporting from West Jerusalem, said Tuesday’s decision to go ahead with the march “is a potentially concerning development in terms of the tensions and the security situation” in the city.

“It’s being viewed in some quarters as an attempt by Netanyahu to stir the pot again and potentially throw something else into the mix that might help his political fortunes,” Fawcett said.

Netanyahu faces an end to his long hold on power on Sunday when the country’s legislature is scheduled to vote on approving a government of diverse parties that came together to unseat him.

If that vote is successful, it will be up to prime minister-hopeful Naftali Bennett and his partner opposition leader Yair Lapid to decide whether to proceed with the march.

Labor politician Gilad Kariv, a supporter of the coalition challenging Netanyahu, called the move “another chapter in the outgoing government’s attempt to leave a scorched earth”.

Tensions are likely to remain high in Jerusalem whether or not the march goes ahead. 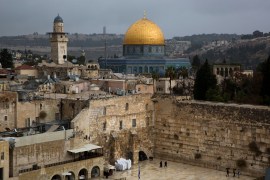 Rally was due to take place on Thursday and proceed through flashpoint spots in Israeli-occupied East Jerusalem. 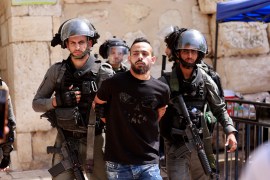 Fear barrier broken despite hundreds of arrests in Jerusalem

Israeli forces are attempting to reassert their control over Palestinians in occupied East Jerusalem by arresting them. 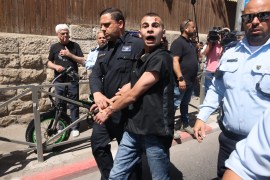 At least 218 Palestinian households in East Jerusalem have cases against them, putting 970 people at risk of expulsion.