Tehran, Iran – The seven men running to become Iran’s president have once again traded barbs in their second debate, while also criticising state television for the way the sessions are being conducted.

Several of the candidates, both conservative and moderate, recognised that the peculiar format of the debates – the first of which was held on Saturday – stifle meaningful dialogue on the major issues at hand ahead of the June 18 polls.

In Tuesday’s three-hour debate, each candidate was randomly posed a question and then had four minutes to reply, after which his microphone was automatically turned off. Throughout the broadcast, candidates also had two four-minute sessions to address other candidates and their programmes, as well as two three-minute periods to defend themselves and their plans.

The event, which was on political and social issues, incorporated no moderation. The only authority given to the presenter was to point out to candidates that they are straying from the question posed to them.

Abdolnaser Hemmati, a moderate who was recently dismissed as the governor of the central bank in order to be able to run for president, said the debates, with their random selection of questions and shallow conversations, look like a “weekly game show”.

Conservative Saeed Jalili, a former nuclear negotiator and senior security official, said the current format “does nothing to help people choose” between candidates, and called for changes in the third and final debate scheduled for next Saturday.

The format also meant that some of the most important questions – including how to handle Iran’s 2015 nuclear deal with world powers, and how to manage United States sanctions – were quickly glossed over.

The question on the Joint Comprehensive Plan of Action (JCPOA), as the nuclear deal is formally known, was posed to reformist candidate Mohsen Mehralizadeh.

He spent less than one minute answering the question, only to say he supported restoring the accord, which the US unilaterally abandoned in 2018, and for which a sixth round of talks will be held in Vienna later this week.

Mehralizadeh chose to spend the rest of his time once more calling into question the qualifications of frontrunner candidate Ebrahim Raisi, the country’s conservative chief justice, who disputed the claim that he has only six grades of classical education.

Raisi, who has also been touted as a main candidate to replace Supreme Leader Ayatollah Ali Khamenei when he passes away, said he boasted the “strong will” to improve the country’s economy and lift US sanctions.

“But at the same time, we need to nullify sanctions and make the economy self-sufficient in a way that no sanctions or corona[virus] or floods and earthquakes could shake it,” he said.

Another major issue largely absent from the debate was the COVID-19 pandemic, which has killed more than 81,000 people in Iran, the biggest official death toll in the Middle East.

Several candidates briefly mentioned the pandemic, mostly to criticise outgoing President Hassan Rouhani’s handling and to promise they will rein it in.

“Our [state] television never reports from North Korea, Vietnam or China and how low their death tolls are,” protested lawmaker Ghazizadeh, saying those countries benefit from “strong leaders” that lead the way.

Rezaei, a conservative, said the Iranian people were living under “the most difficult conditions” since the eight-year war with neighbouring Iraq that ended in 1988, in an economy defined by inflation, unemployment and instability.

Tuesday’s debate again saw the two moderates pitted against the five conservative and hardline candidates. Moderate Hemmati once more claimed that the five others are all covering for Raisi to become president.

The barbs come amid a controversial election cycle that is expected to be capped with low voter turnout due to public dissatisfaction.

The seven candidates were cleared to run while 585 other aspirants were disqualified by the Guardian Council, a powerful 12-member constitutional vetting body that reports to the supreme leader.

Khamenei said last week that some of the excluded figures were “wronged”, in an apparent reference to former three-time parliament speaker Ali Larijani, but his comments did not change the council’s decision. 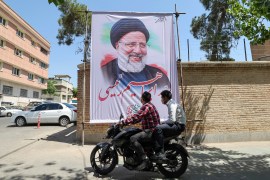 Can a presidential election reshape Iran?

Conservative judiciary chief is frontrunner but activists lead calls for boycott of vote. 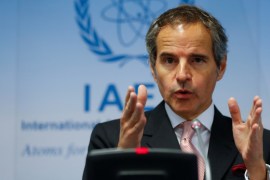