“Equal international status is a must.”

Turkish Cypriots declared Northern Cyprus a Turkish republic in 1983,  giving it the formal title of the Turkish Republic of Northern Cyprus (TRNC), but the UN Security Council immediately denounced it as “invalid” and “incompatible with the 1960 Treaty” that established Cyprus’ independence from Britain.

As a result, only Turkey recognises it.

The internationally recognised Republic of Cyprus is where Greek Cypriots live.

UN resolutions have since called on the two sides to form a bi-zonal, bi-communal federation.

Yet federation was originally an idea of the Turkish Cypriots, who declared a federated state in 1975, months after a Greek coup attempt in Nicosia triggered a Turkish invasion.

Turkey still occupies the northern third of the island, saying it needs to protect its ethnic minority.

Inter-communal clashes had already segregated the two communities in 1964.

“But Greek Cypriots have no reason to accept this kind of a settlement because they are accepted by the world as the Republic of Cyprus on their own, and as such, they are able to enjoy the benefits of recognition by themselves … Why should they ever accept anything less than that?”

Greek-Cypriots have engaged in talks for a federal solution for 30 years. In 2004, the European Union admitted the entire island but suspended EU law in the north pending a settlement.

Ertugruloglu rejects the notion that the TRNC is part of the EU.

Half of its citizens, however, carry Cypriot passports.

“Individually Turkish-Cypriots may have secured for themselves passports and IDs from the Greek Cypriot side but that does not mean that [they] recognise the Greek-Cypriots as their state,” he said.

UN Secretary-General Antonio Guterres has said he will try to bring Greek and Turkish Cypriots to the table again in a few months. Ertugruloglu says he will attend.

“Depending on the result of that we are going to determine our way forward together with our motherland Turkey,” he said.

‘We are very close’

Four years ago, Guterres wrote in a report that an agreement was closer than ever.

“The essence of a comprehensive settlement to the Cyprus problem is practically there. The parties had come close to reaching a strategic understanding on security and guarantees as well as on all other outstanding core elements of a comprehensive settlement,” Guterres wrote to the UN Security Council after the last round of substantive negotiations at the Swiss resort of Crans-Montana in 2017.

A senior diplomat with deep knowledge of the talks said that “the open issues left over from Crans Montana … are trifling.”

“We are very close,” the diplomat told Al Jazeera, on condition of anonymity. “All that the Turkish side is doing is evasive because they want to avoid the solution.”

According to the diplomat, Turkey is holding the Cyprus agreement “hostage” to economic concessions from the European Council this month.

“Turkey will get some concession on immigration and perhaps even a conditional statement that full customs union will be examined when conditions allow, but they won’t get anything beyond that.”

The Turkish lira plummeted throughout 2020 and 2021, reflecting investors’ concerns about rising unemployment, slowing growth and political uncertainty, as a rift grew between Turkey and its Western allies.

Cypriot President Nicos Anastasiades has left open the possibility he may veto any unilateral EU concessions.

“Turkey and our current president know very well that there is no country other than Turkey who is willing to recognise the TRNC as an independent sovereign state on an island which, in its entirety, has been accepted as a member of the European Union,” Nami told Al Jazeera.

“I think they just wanted to put forward this extreme position of recognition of TRNC a priori, and then accept to negotiate and hope that someone, whether it is the Americans or the UN or UK, will try and find the middle ground.”

He believes there should be time limits for talks and consequences for the community that votes against the plan.

Where does the US stand?

Guterres told the Security Council the process has to change, from a bottom-up approach on agreeing the smaller issues first, to top-down process – agreeing on the most contentious.

“An early agreement at the strategic level would immediately provide each side with the needed reassurance that the overall settlement would contain those elements that are of key importance for each community and thus provide impetus for completion of the remaining technical details,” he wrote in his report.

Essentially, this is a reference to the key issue of security, where non-Cypriot actors have a say.

Under the terms of independence, Britain, Turkey and Greece have the right to intervene unilaterally on the island. It was under this Treaty of Guarantee that Turkey invaded in 1974.

After it became an EU member in 2004, Cyprus said the guarantors were unnecessary and constitute a threat. It demands these treaties are repealed and the departure of foreign troops.

Turkey has signalled it is willing to modify but not abolish, its guarantee rights. 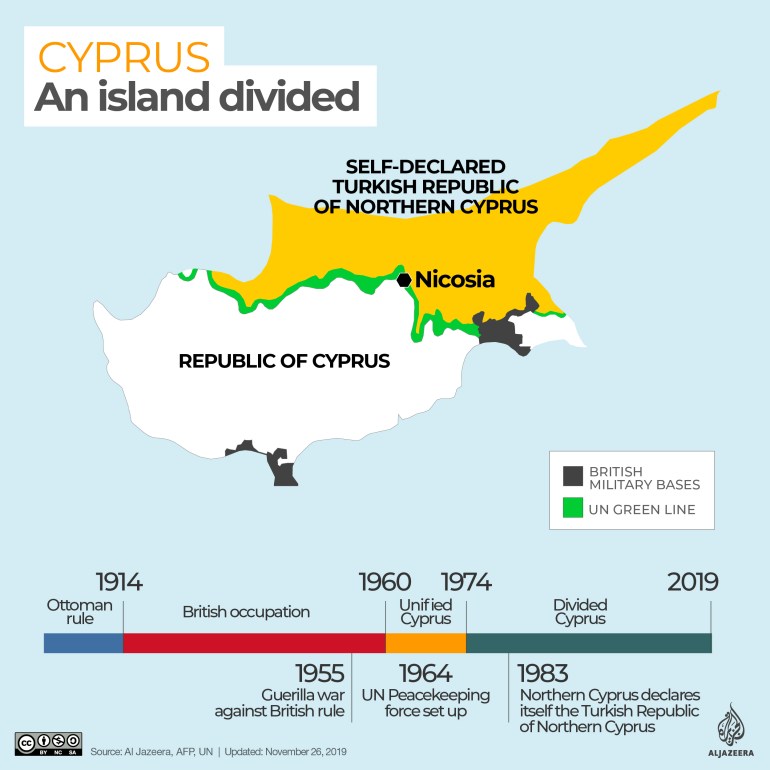 “Having no security link with Turkey whatsoever is seen as an extremely dangerous scenario for Turkish-Cypriots,” said Nami, because they constitute only a fifth of the population.

A strategic agreement on security was “beginning to emerge” at Crans Montana, Guterres said.

The key concessions would have to be made by Turkey, which holds the overwhelming military advantage.

“If Turkey – and Erdogan in particular – is offered the chance to be the champion of the peace process in the eastern Mediterranean, and Erdogan is once again taken as a legitimate, serious counterpart who does not have to wait by the phone for a call from Biden but as a close ally in the great architecture of redesigning the eastern Mediterranean… I think he will play ball,” Nami said.

Joe Biden’s administration has shown the US president is unwilling to appease Erdogan, however; it took him four months to call the Turkish president.

His Secretary of State, Antony Blinken, has stressed US support for a federal solution.

“It is very important that the US … insists that any disputes that arise be resolved peacefully, diplomatically, not militarily and certainly not through provocative actions,” Blinken told Congress in March.

Last month, the US State Department said “cooperation between the United States and the Republic of Cyprus is at a historic high”.

Since 2018, Cyprus has begun joint military exercises and training with the US, sent its first security attaché to Washington and begun to receive US troops and ships.

Turkey, too, is expanding its military presence.

Next month Erdogan is reportedly to inaugurate a newly built airport for Turkish-built TB2 drones, which are capable of carrying bombs. Geopolitically, events do not seem to be moving towards restitution of Erdogan in the West but away from it.

Should Turkey withhold concessions on security and should a comprehensive agreement elude Cypriots, what may happen?

Nami is not optimistic.

“Either formal annexation [to Turkey] or a northern Cyprus which is de facto Turkey,” he said.