Police in the Canadian province of Ontario says a driver intentionally struck a family because they were Muslim, killing four people and seriously injuring a nine-year-old boy in what has been denounced as an “act of unspeakable hatred” and Islamophobia.

The victims, all members of the same family, were hit on Sunday evening while waiting to cross a street in the city of London, 200km (124 miles) southwest of Toronto, Canadian news outlets reported on Monday.

Police said the victims were two women aged 77 and 44, a 46-year-old man and a 15-year-old girl. A nine-year-old boy was seriously injured and is recovering in hospital.

“This was an act of mass murder perpetuated against Muslims,” London Mayor Ed Holder said. “It was rooted in unspeakable hatred.”

The attack was the worst against Canadian Muslims since a man gunned down six members of a Quebec City mosque in 2017. Holder said it was the worst mass murder his city had ever seen.

Sunday’s attack came amid rising concerns about Islamophobic attacks in provinces across Canada and widespread calls for authorities to tackle racism, hate-motivated violence, and the prevalence of far-right groups.

A 20-year-old suspect identified as Nathaniel Veltman was arrested, police said in a statement. He was charged with four counts of first-degree murder and one count of attempted murder.

Veltman was arrested in a mall parking lot without incident while wearing a body-armour-type vest, police said. There is no evidence he had any accomplices.

“There is evidence that this was a planned, premeditated act, motivated by hate,” Detective Superintendent Paul Waight of the London police department told reporters. “We believe the victims were targeted because of their Islamic faith.”

Eyewitness Paige Martin told reporters a black truck blasted past her and ran a red light, and then she came upon the scene and saw “chaos”. First responders were running to help, a police officer was performing chest compressions on one person, and three other people were lying on the ground.

A few dozen people stood on the sidewalk and several drivers got out of their cars to help. “I can’t get the sound of the screams out of my head,” Martin said.

‘Just out for their walk’

Zahid Khan, a family friend, said the three generations among the dead were a grandmother, father, mother and teenage daughter. The family had immigrated from Pakistan 14 years ago and were dedicated, decent and generous members of the London Muslim Mosque, he said.

“They were just out for their walk that they would go out for every day,” Khan said through tears near the site of the crash.

The extended family issued a statement identifying the dead as Salman Afzal, 46; his wife Madiha, 44; their daughter Yumna, 15; and a 74-year-old grandmother whose name was withheld. The hospitalised boy was identified as Fayez.

“Everyone who knew Salman and the rest of the Afzal family know the model family they were as Muslims, Canadians and Pakistanis,” the statement said. “They worked extremely hard in their fields and excelled. Their children were top students in their school and connected strongly with spiritual their identity.”

A fundraising webpage said the father was a physiotherapist and cricket enthusiast and his wife was working on a PhD in civil engineering at Western University in London. Their daughter was finishing ninth grade, and the grandmother was a “pillar” of the family.

‘When does it stop?’

The family statement said the public needs to stand against hate and Islamophobia.

“This young man who committed this act of terror was influenced by a group that he associated with, and the rest of the community must take a strong stand against this, from the highest levels in our government to every member of the community,” it said.

By late evening on Monday, a steady stream of mourners was seen arriving near the scene of the attack, dropping off flowers and saying prayers. One placard read: “When does it stop? Enough.”

A vigil has been organised at a local mosque on Tuesday night to remember the victims.

London, which has about 400,000 residents, has a large Muslim community and Mayor Holder said Arabic is the second-most-spoken language after English in the city.

The teenage girl who was killed “will be deeply missed by fellow students and staff at Oakridge Secondary School”, the school said in a statement.

I’m horrified by the news from London, Ontario. To the loved ones of those who were terrorized by yesterday’s act of hatred, we are here for you. We are also here for the child who remains in hospital – our hearts go out to you, and you will be in our thoughts as you recover.

Canadian Prime Minister Justin Trudeau said he was “horrified” by what he described as an “act of hatred”, and said his thoughts were with the victims’ loved ones, including the young boy who survived.

“To the Muslim community in London and to Muslims across the country, know that we stand with you. Islamophobia has no place in any of our communities. This hate is insidious and despicable – and it must stop,” Trudeau tweeted.

The National Council of Canadian Muslims, a national advocacy group, said it was “beyond horrified” by the deadly attack.

“This is a terrorist attack on Canadian soil, and should be treated as such. We call on the government to prosecute the attacker to the fullest extent of the law, including considering terrorist charges,” the group’s CEO, Mustafa Farooq, said in a statement on Monday.

“This loss of a family, the loss of a child in our community because of Islamophobia – this is a sorrow that will run deep for a long time. But let that sorrow be the ground where we stand for justice, and stand for change.”

Statistics Canada said in March that police-reported hate crimes targeting Muslims “rose slightly” to 181 incidents in 2019 – the last year for which the data is available. That is up from 166 incidents the previous year.

In recent months, Muslim women in the province of Alberta have been targeted in several incidents of verbal and physical abuse.

In September, 58-year-old Mohamed-Aslim Zafis was fatally stabbed outside a mosque in Toronto’s west end where he worked as a caretaker. That spurred calls for authorities to take the threat of far-right violence more seriously and to investigate the attack as being hate-motivated.

Ontario Premier Doug Ford also tweeted his condolences on Monday. “Hate and Islamophobia have NO place in Ontario. Justice must be served for the horrific act of hatred that took place in London, Ontario yesterday,” he wrote.

BREAKING: The National Council of Canadian Muslims (NCCM) is beyond horrified and demands justice after the horrific hate-motivated car attack on a Muslim family in London, Ontario who were out for a walk on Sunday evening. pic.twitter.com/o1wXqjpnRb

Harjit Sajjan, Canada’s minister of national defence, said he was “devastated to learn of the four Muslim Canadians killed in London, Ontario in a despicable Islamophobic attack”.

“Three generations of a family gone in an instant. This pervasive hatred is far too common in our country. We need to come together to end hatred in all its forms.”

Jagmeet Singh, leader of the opposition New Democratic Party (NDP), also condemned the attack. “They were murdered because of their faith,” Singh wrote on Twitter. “More than ever we must stand w/ our Muslim family, friends & neighbours against such vile hate.” 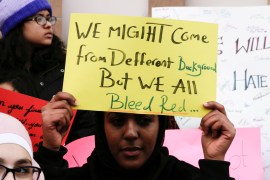 The brazen killing of a Toronto-area mosque caretaker points to rise of far-right groups in Canada, experts say. 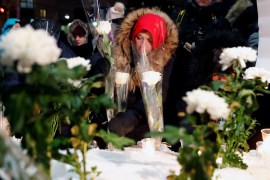 Four years after Quebec mosque attack, a promise ‘not to forget’

‘It feels like it was yesterday’, says co-founder of Canadian mosque where six Muslim worshippers were killed in 2017. 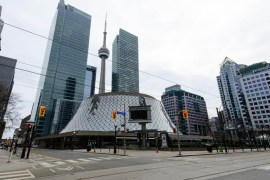 National Council of Canadian Muslims says fatal stabbing of man outside a Toronto mosque has shaken the community.