By Aisyah Llewellyn
Correction6 Jun 2021
An earlier version of this article misstated the name and gender of the Geutanyoe Foundation's director.

Medan, Indonesia – A boat carrying 81 Rohingya refugees has washed ashore at an uninhabited island in Indonesia after drifting for more than 100 days at sea, leading to a tense standoff with local authorities as to whether they will be allowed to enter the country or be driven back to sea.

The small wooden boat was discovered early morning on Friday in waters off Idaman Island off the coast of Aceh province, about two hours away from the town of Lhokseumawe, which is usually only used as a rest spot for fishermen in the area.

“Our staff in the field have met with the refugees who said that they have been travelling for three months,” said Rima Shah Putra, the Director of Geutanyoe Foundation, an NGO which provides education and psychosocial support to refugees in Indonesia and Malaysia.

“They travelled from India to Aceh using a small twin-engine, 100-seat boat,” he told Al Jazeera.

It is thought that the refugees, many of them women and children, had originally travelled from camps in Bangladesh to waters off the coast of India, where their boat broke down and was fixed by the Indian coastguard which gave them supplies of food and water, but did not allow them to land.

The Indian coastguard is also thought to have found that eight of the 90 refugees who originally set sail had died on the boat.

The refugees were refused re-entry into Bangladesh, forcing the passengers to try to reach Malaysia before coming ashore at Idaman Island.

“Of course they are in poor condition and the island itself has no facilities and is full of mosquitoes,” said Putra.

“They are near the mainland and waiting for the decision as to whether they will be allowed to relocate to Aceh or not.”

Back out to sea?

A source in Aceh, speaking on condition of anonymity given the sensitive nature of the situation, told Al Jazeera that a standoff had occurred on Friday afternoon as local police had urged the refugees to return to their boat and leave Indonesia’s waters, which the refugees had refused to do.

“They will decide tomorrow [Saturday] whether to push them back out to sea or not,” the source added.

According to Putra, the decision will come from the national government in Jakarta, with support from the local government.

Aceh has historically been supportive of Muslim Rohingya refugees settling in the province, which is also the only area in Indonesia to practise Sharia law.

In June and September of last year, two boats carrying 100 and 300 Rohingya refugees were allowed to disembark and claim refuge after being assisted by local fishermen.

‘Too hungry that we forgot our own names’

One of the refugees who landed in September, 18-year-old Gura Amin, had been at sea for seven months after setting sail from Cox’s Bazar in Bangladesh. He told Al Jazeera that he could only imagine the condition of the refugees on Idaman Island.

“We hardly had anything to eat and we were so hungry that sometimes we forgot our own names,” he said.

“To all my Rohingya sisters and brothers in Aceh, I am praying for you.”

Amin added that the Rohingya have little choice but to undertake dangerous journeys by sea in search of resettlement, following the violence in Myanmar. Hundreds of thousands of Rohingya were forced to flee their villages in 2017, which were razed to the ground following a crackdown by the Myanmar military.

Southeast Asian countries including Thailand and Malaysia, however, have become increasingly reluctant to allow Rohingya refugees to land. Both countries cited the coronavirus pandemic as a reason not to allow refugees to come ashore.

As a result, Indonesia has become one of the few Southeast Asian nations to allow refuge to Rohingya refugees, although the government does not allow them to work or resettle in the country permanently, and is not a signatory of the Refugee Convention.

Hamid added that the international community should also take a greater role in protecting refugees through resettlement and other safe and legal strategies that would allow them to travel to a new host country. Rohingya refugees in Indonesia have previously been resettled in the United States and Canada.

As they wait for the government to decide their fate, the Rohingya refugees on Idaman Island are staying in emergency tents and have been provided with food, water and snacks by locals from the surrounding area, according to Putra.

The majority of the Rohingya refugees who had arrived in Aceh in June and September of 2020, including Gura Amin, were relocated to the city of Medan in April. The move is part of a new government plan to centralise refugees in settlements in the provincial capital of North Sumatra rather than in Aceh.

Putra said he hopes that will help with the government’s decision on whether to allow the latest group of refugees to land.

“The fact that the camp is almost empty means that it can accommodate all the refugees on the island right now,” he said. 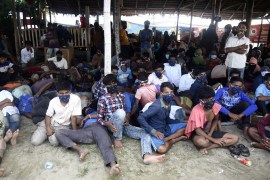 Nearly 300 Rohingya come ashore in Aceh after months at sea

The group included women and children and are thought to have spent months at sea as traffickers demanded payment. 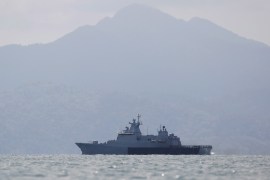 Malaysia has stepped up patrols around its maritime borders as Rohingya attempt to reach the country by boat. 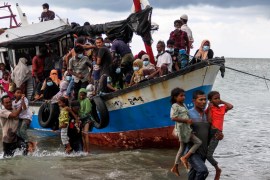