By Bilal Kuchay and Manoj Singh

Gorakhpur, India – Javaid Akhter, 71, has lived all his life in his 100-year-old ancestral house built by his grandfather. The house is located just a few metres away from a famous Hindu temple in northern India’s Uttar Pradesh state.

Akhter, a retired engineer with the Indian railways, says Gorakhpur district officials, including the police, visited his house recently and took measurements of the surrounding land.

The next day, he was asked to sign a “consent letter”, which said the residents living on the southeastern side of the Gorakhnath temple had given their “consent to transfer or hand over (their) lands and houses to the government” for the “safety of the temple premises”.

“We have no issues and as of our consent, we have our signatures as followed,” reads the letter, with the names and signatures of residents concerned.

Nearly a dozen families, all from the minority Muslim community living in the vicinity of the temple, were asked to sign the consent letter, with the signatories alleging they have been asked to vacate their houses.

Akhter told Al Jazeera that he saw a few families had already signed the letter.

“The officials told us that if we do not sign the letter, they have other ways to get our signatures as well. We were pressured,” he said.

Before he became the chief minister in 2017, Adityanath, a saffron-clad hardline leader from Prime Minister Narendra Modi’s Bharatiya Janata Party (BJP), was a member of parliament from Gorakhpur for nearly two decades.

Spread across an area of 52 acres (21 hectares), the temple traces its origin to the 11th century monk, Guru Gorakhnath, who belonged to the Shaivite tradition within Hinduism.

With a population of 220 million, nearly 20 percent of them Muslims, Uttar Pradesh has long been a flashpoint for religious tensions which intensified after the BJP came to power in 2014.

Last month, the local administrators in the state’s Barabanki district demolished what Muslims in the area claimed was a 100-year old mosque, causing anguish in the community.

‘Have I signed on my death certificate?’

Retired engineer Akhter said local officials in Gorakhpur told the signatories they will be compensated for their land and properties.

“But we don’t want any compensation. We just want to continue to live here because this is the place where our parents, grandparents have lived for over a century,” he said.

Akther says that despite Gorakhpur being a BJP stronghold, Hindus and Muslims have “always lived in peace and harmony in his area”.

On May 27, Musheer Ahmed was not at home when officials from the local revenue and police departments visited his house.

The officers also measured Ahmed’s house. The next day, the 70-year-old was asked to sign the “consent letter”.

Ahmed, who has suffered from hypertension and depression for 10 years, says he is worried about his 125-year-old ancestral house.

“My tension has since then increased. Have I signed on my death certificate?” he says. “I do not understand why my house, which is 125 years old, is being taken away. I am scared.”

Ahmed says he wants to raise the issue with Chief Minister Adityanath.

Intezar Hussain’s house is lies southwest of the Gorakhnath temple. He says he has been “verbally told” by local officials that his house would be “acquired” for security reasons and that he would be compensated for the loss.

Hussain says he asked the officials to give their assurances in writing first before coming to a decision.

“We came to know that 11 in the southeast direction [of the temple] are being taken by the government. I went and met everyone there and tried to know why the government wants to take our land and homes but there was no clear answer,” he told Al Jazeera.

“Those who signed the consent form are now regretting it. They are now saying they will not vacate their properties.”

Akhter lives in his two-story house with nine other family members, including his two sons and grandchildren.

“We have lived here for generations. We don’t want to leave our ancestral place,” he told Al Jazeera.

Akhter said there is already a police station close to the temple and a police post inside the temple premises.

“There is no need to increase the police presence in the area,” he said.

The local administration denies putting pressure on the Muslim families or forcibly taking their signatures.

“It is a 100 percent cooked and false information,” Gorakhpur’s District Magistrate Vijayendra Pandian told Al Jazeera, adding that it is up to the people whether they want to give their land or not.

“We are not capable even to take anybody’s land without their consent,” he said, adding that the document being shared on social media is “cooked up”.

“The information which is circulating is 100 percent false. We are going to file an FIR (police report) as per the IT Act and the action has been already initiated,” he added. 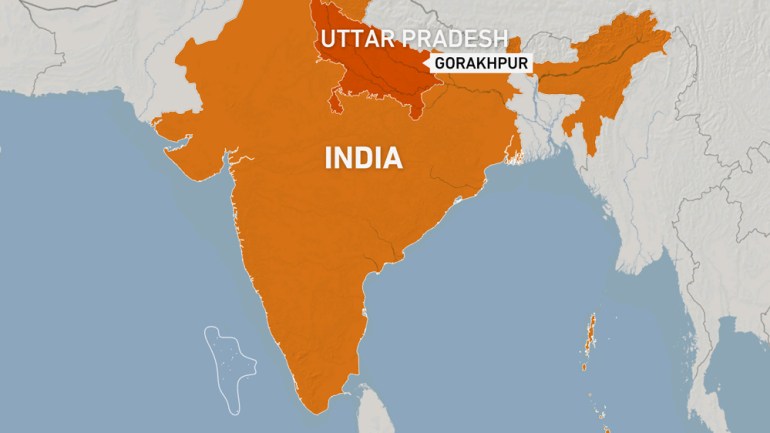 Pandian said the “official document is with me”.

When asked by Al Jazeera what that “right information” is, he said: “Why would I tell you?”

Pandain accused the media of “seeing everything through the Hindu-Muslim prism” and claimed his administration is “only focusing” on the coronavirus pandemic.

But Shahnawaz Alam, the chairman of the opposition Congress party’s minority department in Uttar Pradesh, said journalists have reported that the administration “forcibly acquired the signatures” of the residents around the temple.

“Instead of acting against the officials, the state government is instead threatening those journalists of charging them under the National Security Act (NSA),” a statement released by Alam said.

A report by Maktoob website on Friday said Gorakhpur officials threatened a New Delhi-based journalist, who was covering the alleged eviction of Muslim families near Gorakhnath temple with arrest under the “draconian NSA”.