Beirut, Lebanon – As increasing numbers of Lebanese families struggle to make ends meet amid the economic collapse, simple foodstuffs such as the traditional manoucheh are becoming a luxury that few can afford.

In better times, the ubiquitous Levantine dish of flatbread – classically topped with zaatar paste, cheese or various other toppings – would be served for either breakfast or lunch, particularly among working-class families looking for a cheap, filling everyday meal. It is also a very popular snack.

Today, even in the heart of Beirut’s most vibrant districts, it’s an uphill battle for many smaller manoucheh furns (bakeries) to stay open, as costs have soared and business has dried up. Where once whole extended families and groups of friends would come together to share in a hearty meal of manoucheh, now even this simple pleasure is slipping away.

“Before the explosion, we had a lot of offices around us in Gemmayzeh, [plus] the people who worked at the port, tourists from the area and people just hanging out,” Hikmat Kai, owner of the Flour Bakery, tells Al Jazeera. “Now, the offices are destroyed or shut, residents haven’t come back and most people are eating at home to save money these days. We’ve lost about 70 percent of our customers.

“I have five or six families that make their livings off this bakery,” he continues. “The shop is really staying open to keep providing those employees with an income. Personally, I’m not making a profit.”

Before the onset of Lebanon’s ever-worsening financial meltdown, a basic manoucheh used to cost around 1,500 Lebanese pounds, or $1. Now, if vendors are to match current exchange rates, the same item would cost almost 13,000 pounds ($8.60), a near tenfold increase in less than two years. For a family of five, that amounts to 52,000 pounds ($34.50) for something that was once seen as one of the most affordable meals available.

This same hyperinflation has made imported ingredients extremely expensive against the dollar. Meats and cheeses were once popular additions, but now even fundamental elements such as flour and oil are becoming hard to come by, forcing furns to either raise their own prices to cover costs or take items off their menus entirely.

“Sometimes, I’m forced to shut off the gas to save [money],” he adds, “but, at the same time, we’re lowering the temperature of the oven and so will have to bring it back up again when there are orders. It’s best to keep it on throughout to keep the temperature steady, but now we can’t always afford to keep it running and waste the gas.”

For many in Lebanon, these continued crises have been a call to action. While the government continues to face harsh criticism due to stalling responses and political deadlock, it falls to citizens to find solutions to these problems.

Originally conceived in February 2020 in the wake of the October 2019 protests, Man2ouche 3al Raf is an initiative that launched in September 2020 with a simple mission to prevent poverty interfering with food access in Lebanon, by drawing on community spirit and social responsibility with a simple opt-in “pay it forward” scheme.

“I studied in Italy where I discovered the concept of caffè sospeso [suspended coffee’],” explains campaign originator Rania Aoun Bounassif. “You go to any bar and you order two coffees. You consume one and you leave one to be consumed by a poor person passing by the bar.

“Because coffee is a traditional beverage in Italy, I thought I should do it for something in Lebanon, something that’s cheap, accessible and known as Lebanese, so I thought of the zaatar manoucheh,” she continues. “The ingredients are all locally grown. It’s purely Lebanese. It’s not the fancy version with ham or cheese. It’s the version that someone can eat every day.”

The Man2ouche 3al Raf initiative allows customers at participating furns across Lebanon to buy “pending” manoucheh while purchasing their own for themselves. These are then collected by local NGOs, associations or volunteers to be distributed to needy families in their communities.

Support quickly poured in for the project, not just from concerned citizens but also from the furns themselves.

“Some bakers, when they joined the campaign, would just give [us] 100 manoucheh,” says Aoun Bounassif. “Not only were they asking their clients to give, they were also giving to their local neighbourhoods and areas. That was awesome. People are getting poorer, so any help is very much appreciated.”

Aoun Bounassif says even small contributions can have a significant, life-changing impact on those who have found themselves no longer able to support their families. With so many now living below the poverty line in Lebanon, there is no shortage of sympathy to go around.

“By starting this initiative in these crazy times, I’m giving people the opportunity to help each other,” says Aoun Bounassif. “You don’t have to be super rich. If you’re going out to buy manoucheh for your family, you can keep a hungry person satisfied for the whole day, without [them] having to look in the trash or go begging for food.”

Despite a grim outlook, Kai remains confident that things will eventually improve, placing his faith in the indomitable nature of his countrymen.

“In Lebanon, we won’t allow ourselves to starve,” says Kai. “We’ve been through a lot and might accept death by a gunshot, an explosion or an accident, but it’s a bit hard to allow starvation to be the reason we die. If I see someone hungry, I’ll feed them, and if someone sees I’m hungry, they’ll feed me.

“I have another passport so I could leave, but I don’t want to,” he adds. “I’m Lebanese and a cedar tree should live in Lebanese soil. Maybe things would be easier in another country, but this is our homeland and, despite the challenges and everything that is happening, it’s still somewhere I’m content. We just have to persevere right now.”

With additional reporting by Maghie Ghali 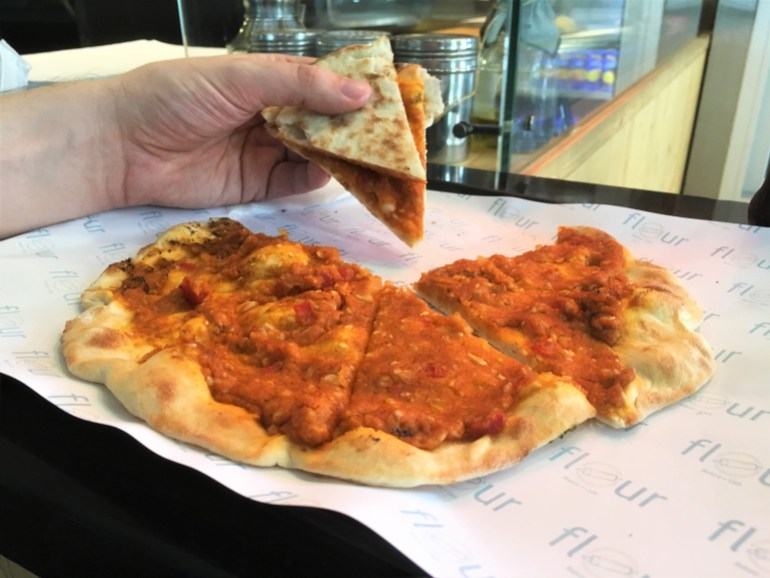