Teplice, Czech Republic – “Come and kill us!” chanted the crowd.

Many beat their fists on their chests as fury and sorrow erupted in front of a crumbling tenement building.

A week earlier on this street in Teplice, a small city close to the Czech Republic’s northern border with Germany, Stanislav Tomas – a 46-year-old Roma man – died after being detained by police.

A video of Tomas’s arrest, during which he initially screams and writhes before ceasing to move as a police officer kneels on his neck for more than six minutes, has spread across Czech social media networks.

Many see similarities with the murder of George Floyd by police in the United States, which led to massive protests across the globe.

The incident has shone a light once more on the plight of the large Roma communities that live in Central Europe, who face deep discrimination, and often abuse, at the hands of police and authorities. But few expect it to spark any change.

Nearly 500 Roma travelled to this dilapidated corner of the city, which is sandwiched between industrial units and a busy highway, to attend a memorial for Tomas on Saturday.

From across the country, as well as Hungary and Slovakia, they quietly trooped past the police cars blocking the roads into the neighbourhood.

Organisers hoped the event would be positive.

“Who hasn’t had a cookie?” called out Josef Miker, a prominent Roma activist who handed out traditional treats.

Flowers and candles filled the pavement in front of the building, most of which is covered with advertisements – companies offering cash for blood donations.

Families sat on blankets spread on the dusty verges behind a nearby filling station.

“We’re glad the police are here,” said 28-year-old Jana. “There have been rumours that the far-right could attack us.”

Speeches, songs and prayers wish Tomas and his family peace, and extol the world to recognise that “Roma are human”.

“The Czech police are racist,” said 38-year-old Milan, who held a large Roma flag – a green and blue field behind a bright red many-spoked wheel. “We don’t believe anything they say.”

In her cramped kitchen, she nervously scrubbed chipped mugs as she offered coffee.

In the next room, her mother, suffering from Alzheimer’s disease, stared blankly at cartoons.

She does not know that her son is dead.

She has never come to terms with the death of Stanislav’s brother 20 years ago in a car crash.

“I’m waiting for one of her good days,” Simona said tearfully.

Neither does Stanislav’s mother know that the police insist that her son was a repeat offender and drug addict.

They have pointed to a video they say shows Tomas “under the influence” just before they arrived as evidence.

The autopsy, they claim, proves his death was not linked to the police actions but to drugs.

Simona’s face hardened as she pondered these claims.

She was not close to her brother in recent years, but he visited their mother regularly, always arriving with food and gifts.

She says he did not take drugs.

The Council of Europe and Amnesty International have called for an independent investigation into the incident, but Tomasova expects little result.

“This isn’t the first time the police have killed Roma,” said Jan Cervenak, who travelled from Kutna Hora to attend the memorial. “No one believes them about what happened here.”

Four years ago, just down the road in Zatec, a 27-year-old Roma man died after a struggle with police at a pizzeria; the officers involved faced no disciplinary action.

Reports of casual mistreatment by police and other authorities are common across the country.

With this in mind, the speeches emanating from a bullhorn rouse the crowd. Crimes against the community are listed and justice demanded.

And as the afternoon sun started to beat down, the mood suddenly turned.

With a chant of “Rise up Roma!”, the crowd marched into town, bringing the Saturday afternoon traffic to a halt.

A lone police car was forced to rush away, sirens wailing, as the crowd surrounded the vehicle and struck the windows.

At the local police station, riot police were waiting.

“We want the truth,” the crowd chanted.

“Stop executions,” they called, as a man fell to the floor to be pinned down in a grotesque theatre of Tomas’s arrest.

But as a sudden downpour spilled from the skies, temperatures on both sides cooled and all scurried for cover.

The Roma in the Czech Republic make up just 2 percent of the country’s 10 million.

Carrying “Roma Lives Matter!” placards, some at the memorial hoped Tomas’s death could provide a political spark for change.

But while former US police officer Derek Chauvin was sentenced earlier this month to 22.5 years in prison for murdering George Floyd, no one is expecting the policeman that knelt on Stanislav Tomas’s neck to face charges.

There has been a deafening silence from across the political spectrum. Several political parties did not respond to questions from Al Jazeera.

“There’s no political advantage to be gained by supporting the Roma community,” suggested activist Gwendolyn Albert.

Someone “respectable” would not have found themselves in that situation, Babis said, suggesting anyone taking drugs and attacking police should not “expect to be treated with kid gloves”.

“This tragic incident isn’t going to secure any significant advances for the Roma community,” said Miker, the activist.

At best, he hopes the European Union might now ban police from kneeling on necks.

Like many towns in northern Bohemia, whose mines once kept the Czech industry running, Teplice has problems with drugs, especially methamphetamine.

This is the substance that police say killed Tomas after he was loaded into an ambulance on the sticky afternoon of June 21.

The conditions in which many Roma live in this part of the country are shocking.

The community struggles with discrimination in education, housing and employment. Ghettos, rife with rubbish and disease, scar towns and cities.

Locals at the memorial said Tomas lived in a tent by a stream that runs beneath the highway.

They say he was not a troublemaker or a drug addict. He was reportedly looking forward to starting a job as a security guard at a supermarket.

However, their words carry little weight.

One local woman, echoing claims made to Czech media, says that police have made witnesses sign agreements not to discuss the incident.

She says people in the neighbourhood are scared of the police.

Simona Tomasova says police forced several witnesses to delete videos of the incident from their phones.

With help from her priest and Konexe, the Roma rights NGO which organised the memorial, she wants to raise the 3,000 euros ($3,570) it will cost to have another autopsy carried out.

But Simona has little real faith that her brother will ever get justice.

“We are just Roma,” she shrugs. 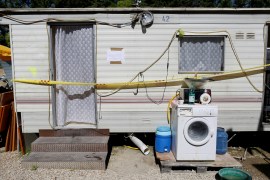 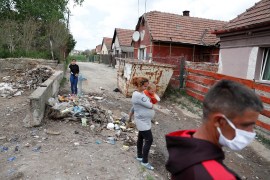 Police violence towards the Roma has risen in the pandemic, according to rights groups, witnesses and legal experts. 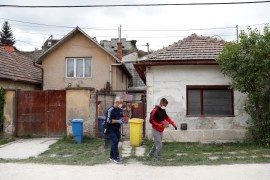 Roma mistrust in governments is an obstacle to COVID-19 recovery

To convince Roma in Europe to take up the vaccine, governments need to take steps to build trust. 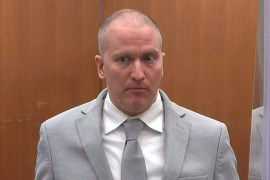