Since the United States last month threw its support behind temporarily suspending intellectual property protections for COVID-19 vaccines, the movement to boost the supply and production of shots has gathered momentum.

The United Nations has warned that vaccine inequality between nations has allowed COVID-19 to continue spreading and increased the chances of variants emerging that could evade the current crop of vaccines.

World leaders have adopted different approaches to the challenge of inoculating populations that lack vaccine doses.

Big pharmaceutical companies and countries including the United Kingdom, Canada and Germany have opposed the plan, citing potential harm to innovation and a lack of viable manufacturing sites needed to boost production.

“It’s such a chaotic situation,” Yuanqiong Hu, legal adviser for the Access Campaign for Doctors Without Borders said.

“We see huge inequity globally. There’s a high level of concentration on who owns the technology and who produces it,” she added.

With negotiations over waivers set to resume at an informal WTO meeting on Wednesday, we take a look at the intensifying debate around waivers.

What are intellectual property rights?

Intellectual Property (IP) rights vary from country to country. The WTO defines them as the rights given to people for what are called “creations”.

Creators can use IP rights to prevent others using their creations or to negotiate payment in return for permission to use them. Creations may include inventions, artistic expressions, ideas or formulas, among others.

They are covered by patents, trademarks and copyrights, which give creators a short monopoly over their idea, when others are not allowed to copy it. Biotech firms argue that these protections have provided the motivation to develop and produce COVID vaccines in record times.

The WTO Agreement on Trade-Related Aspects of Intellectual Property Rights (TRIPS) “is the most comprehensive multilateral agreement on IP” and it has been in place since 1995.

What does an IP waiver do?

A waiver temporarily “removes” the intellectual protections provided by the WTO.

The request brought forth by India and South Africa proposes allowing countries to choose not to implement patents and other IP related to health products and technologies, including diagnostics, therapeutics, vaccines, equipment and other materials or components, as well as “their methods and means for the prevention, treatment or containment of COVID-19”.

This could provide countries with the space to increase collaboration in research and development, exempting the WTO members from the risk of being sued by others for not implementing the TRIPS Agreement during the pandemic.

It is an option for countries to implement at their discretion. The proposal calls for the waiver to remain valid for at least three years from the date of the decision.

“An IP waiver doesn’t automatically remove all intellectual property rights relating to vaccines, PPE, ventilators and anything else,” Duncan Matthews, director at Queen Mary Intellectual Property Research Institute in London said. “It gives the discretion to particular countries to do that.”

“We wouldn’t, for example, expect to see a waiver of IP In Europe, in the US or in other developed parts of the world. It would simply create an opportunity for middle and low-income countries to set aside those rights where they deem it necessary to increase supply and to scale up production,” he added.

Who opposes the initiative and why?

Organisations including the World Bank and the European Union, and countries including Japan, the UK, Switzerland, Brazil and Australia have opposed the initiative.

Some leaders have argued that it would pose a threat to innovation.

“I don’t think waiving patents is the solution to supply the vaccine to more people,” Germany’s Chancellor Angela Merkel told reporters early in May.

“I think that we need the creativity and innovation of the companies – and for that we need patent protection,” she added.

Others have argued that countries lack the facilities, technology and know-how to produce vaccines. As an alternative, the EU has called on the US and the UK to increase the export of both vaccines and ingredients in finished products.

“The European Union is the only continental or democratic region of this world that is exporting at large scale,” Commission head Ursula von der Leyen told a news conference in May.

“We invite all those who engage in the debate of a waiver for IP rights also to join us to commit to be willing to export a large share of what is being produced in that region,” she added.

Others say that even if the waiver is removed, the capacity of production would not automatically increase in the short- and medium-term.

Pharmaceutical companies argue they are negotiating contract and licensing deals with producers on a case-by-case basis with the aim of protecting intellectual property and ensuring safety.

Manufacturers in Bangladesh, Canada, Denmark, and India have said they have the capability to produce vaccines, but they are not able to do it due to the lack of licenses.

One example is Biolyse in Canada. The company produces cancer drugs and believes it is one of the few companies in the country with the capacity to produce COVID-19 vaccines, but patent restrictions have prevented it from moving forward.

However, in addition to the so-called “recipe” for the vaccines, potential manufacturers would also require access to the trade secrets or knowledge and technology needed to produce the vaccines.

Professor Matthews said this type of knowledge “is often something which is literally in people’s heads. It’s the skill about how to run the manufacturing process in the factory and to know what to do if something goes wrong”.

“So how do you get access to this confidential information? The typical way this is done is that you have to send an expert to train the local people, so one of the things discussed now is rather than having a country having to do this on its own, it would be more efficient to have regional manufacturing centres,” he added.

The WTO does not have the power to force companies like Pfizer and Moderna, whose vaccines use novel messenger RNA (mRNA) technology, to share this know-how with other companies.

South Africa has recently said they will host the continent’s first COVID-19 mRNA vaccine technology transfer hub, backed by the WHO. The goal is to scale up production and access to COVID vaccines.

On June 30, the WTO TRIPS Council will hold the first of a series of meetings planned over the next month, for talks on the scope and coverage of the TRIPS waiver. The group has yet to start text-based negotiations, a critical step towards any agreement on waivers.

“They are going to propose the text that addresses some of the concerns and move the agenda forward, the initial meeting will be on what products should be covered,” said Brook Baker, a professor at Northeastern University School of Law.

“They’ve tried to specify that already it is medicines that prevent, treat or control the spread of COVID-19, medical technologies and products, vaccines, medicines, diagnostic tests, PPE … so my question would be which one of these products doesn’t Germany want to include?

“Which ones have they not used? All that South Africa and India are asking for is the same products that are available in rich countries,” he added.

Negotiations are expected to continue, with a potential agreement in time for the WTO’s next ministerial council meeting scheduled for November 30 through December 3.

“This process, even at its fastest pace, even if everything went right, isn’t going to be achievable until the beginning of December,” Matthews said.

Baker said there were concerns that protracted negotiations would make the proposal less practical and that calling pharma companies into negotiations could speed things up.

“The mere threat of a waiver should be enough to bring big pharma to the table in a different way,” Baker explained.

“Rich countries could basically tell their drug companies we’ve got to expand capacity … we can do this the hard way, which will take long, we will enact a waiver … Or why don’t you come to the table now, we will compensate you, but you need to transfer your technology, so that we can have more production, lower prices and equitable distribution globally,” he said. 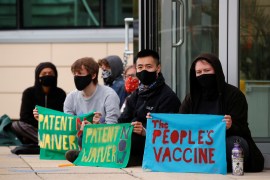 US backing of proposal to waive intellectual property protections for COVID jabs has raised hopes in poorer nations. 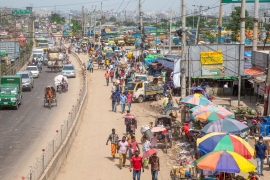 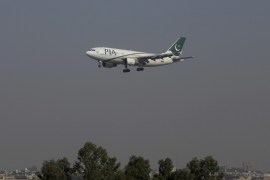 Amid COVID dip, Pakistan to ease some flight restrictions

Curbs on flights from several countries, including all European nations, Canada and China, to be lifted from July 1. 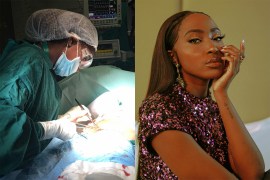 Lioness: The rapper on the frontlines of the battle against COVID

The Namibian doctor-by-day, rapper-by-night talks about juggling two careers and how her mother inspired her to succeed.