The Colombian government is offering a reward of nearly $800,000 for information leading to the capture of those behind an attack on a helicopter carrying President Ivan Duque near the Venezuela border on Friday.

The helicopter was approaching Cucuta airport on a flight from Sardinata when several shots – apparently from rifles – were fired at it.

Duque was flying with defence minister Diego Molano, interior minister Daniel Palacios and other officials at the time.

No one on board was injured, but photos released by the president’s office showed the tail and main blade had been hit.

“A reward of up to 3bn Colombia pesos [$796,000] is being offered” for information leading to “those responsible for this terrorist attack”, Molano said on Saturday in a video posted to social media.

General Jorge Vargas, the national police chief, said a search team sent to a nearby Cucuta neighbourhood found an AK-47 and a 7.62-calibre rifle “bearing the mark of the Venezuelan armed forces”.

Translation: “We offer a reward of up to 3,000 million pesos [$796,000] for information that allows locating those responsible for the attack against the president @IvanDuque. We call for the union of Colombians with the #Public Force to defeat terrorism together, ” Molano said.

Bogota and Caracas broke off diplomatic relations shortly after Duque, a conservative, came to power in 2018.

‘Our state is strong’

Earlier on Friday, Duque had attended an event in the Catatumbo region, one of the main coca-growing areas in a country that is the world’s leading cocaine exporter.

Holdouts from the disbanded FARC rebel group, an active fighter group called the National Liberation Army (ELN), and other armed bands have been fighting over drug trafficking revenues along the long and porous border with Venezuela.

“We are not frightened by violence or acts of terrorism,” Duque said after the attack on his chopper. “Our state is strong.”

Colombia has been experiencing some of its worst violence in years, particularly in rural areas including the border zone. 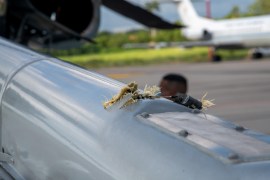 No injuries reported in incident that took place when helicopter was flying through the country’s Catatumbo region. 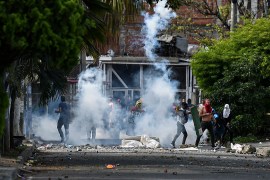 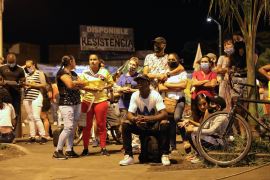