The United Kingdom was gripped by a political scandal on Friday as a tabloid newspaper published images of health chief Matt Hancock kissing an aide – an embrace that broke social-distancing rules.

The photographs on the front page of The Sun newspaper showed Hancock flaunting COVID-19 social-distancing guidelines to kiss the woman – a friend hired for a taxpayer-funded role – in his office last month.

The pictures were taken on May 6 – 11 days before lockdown rules were eased to allow hugs and other physical contact with people outside one’s own household.

As the story went viral on social media, Health Secretary Hancock, a married 42-year-old father of three, said he had “let people down” with his actions and was “very sorry”.

“I accept that I breached the social-distancing guidance in these circumstances,” he said. “I remain focused on working to get the country out of this pandemic, and would be grateful for privacy for my family on this personal matter.”

A spokesman for Boris Johnson later said the UK prime minister had accepted Hancock’s apology and considered the matter closed.

Asked if Johnson had full confidence in Hancock, who has been engulfed in controversy in recent months, the spokesman said: “Yes”.

The spokesman also said the appointment of Hancock’s aide had been made in “the usual way” and had “followed correct procedure”.

The Rupert Murdoch-owned Sun newspaper said Hancock met the aide at the University of Oxford in the early 2000s. She is listed on the health department’s website as a non-executive director.

Hancock has previously commented on breaking physical-distancing rules for relationships.

Last year, he said that it was right for a government scientist to resign after he broke COVID-19 rules by meeting a partner, describing social-distancing guidelines as both “there for everyone” and “deadly serious”.

The opposition Labour Party called on the prime minister to sack Hancock, saying his position was “hopelessly untenable” after Friday’s developments.

“If Matt Hancock has been secretly having a relationship with an adviser in his office – who he personally appointed to a taxpayer-funded role – it is a blatant abuse of power and a clear conflict of interest,” said Labour Party Chair Anneliese Dodds.

Hancock has been at the fore of the government’s fight against the coronavirus pandemic, often appearing on television urging the public to follow strict rules and defending himself from criticism.

His critics have chastised his handling of the government’s pandemic response as sluggish at points and scattergun at others.

In recent months, he has been caught up in several scandals.

Johnson also appeared to blame the health secretary for the UK’s difficulty in securing ventilators for COVID-19 patients during the early stages of the crisis.

In February, Hancock was found to have acted unlawfully by not revealing details of contracts signed during the pandemic.

He has faced questions over his ownership of shares in a family company that won a COVID-related contract from his ministry last year.

The health secretary has also been persistently criticised for failing to adequately protect care homes from the spread of the virus.

And in early 2020, during the first wave, he was blamed for failing to procure enough personal protective equipment (PPE) for healthcare workers.

The UK, one of the hardest-hit countries by the COVID-19 pandemic, has recorded more than 128,000 coronavirus deaths.

A successful mass vaccination drive in recent months has seen the rate of deaths plunge, but the emergence of the Delta coronavirus variant, first detected in India, has seen case numbers rise sharply once more, prompting warnings that a third wave is now under way.

Concerns about the highly transmissible Delta strain forced Johnson to delay a planned full lifting of virus restrictions in England earlier this month. 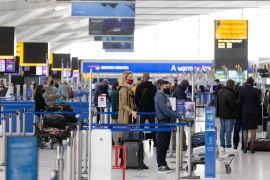 UK’s travel industry employs 860,000 people and has been brought to a halt by government restrictions to curb the virus. 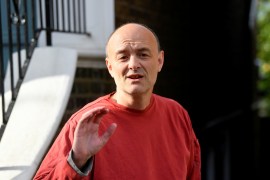 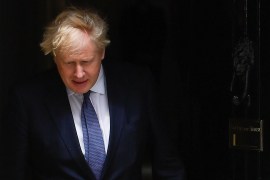