The nine Catalan separatist leaders who were jailed for their role in a failed 2017 independence bid walked out of prison on Wednesday after the government granted them pardons.

They had spent between three and a half and four years behind bars.

Seven of the freed secessionists were greeted by newly-appointed Catalan leader Pere Aragones.

Dozens of supporters had gathered in the rain outside the Lledoners jail, north of Barcelona, where they had been held.

The men, released in a group, held up a small banner that said, in English, “Freedom For Catalonia”, as well as a Catalan flag. They addressed their supporters in the Catalan language.

“We are aware that today, with our release from prison, nothing has ended,” Junqueras told supporters. “Prison does not scare us, it reinforces our ideas.”

At the same time, the two remaining prisoners, both women, were released from two other facilities.

The secessionists, all of whom were given lengthy prison terms in 2019, were handed pardons on Tuesday by Prime Minister Pedro Sanchez’s government in a goodwill gesture aimed at easing tensions between Madrid and Catalan secessionists.

Discord over a desire for independence in the Catalan-speaking region of 7.5 million grew in earnest about 10 years ago, as economic hardship weighed and discontent simmered with the then-conservative administration opposed to greater autonomy.

In October 2017, secessionists passed a short-lived unilateral independence declaration based on the results of a referendum deemed illegal by Spain’s top courts, plunging the country into its deepest political crisis for decades.

Although their jail sentences have been dropped, the nine Catalans are banned from holding public office and the pardons are conditional on them not committing “a serious crime” over the next three to six years.

Madrid is hoping the move will give impetus to future talks with the Catalan government of Aragones, who is more open to dialogue than his hardline predecessor.

Aragones and Junqueras, who heads the pro-independence Catalan Republican Left (ERC) party, have recently taken steps towards Sanchez by distancing themselves from the path of unilateralism.

“We will devote all our efforts in this new stage to ensuring that negotiation be the basis for resolving the conflict,” Aragones said on Tuesday. “The best way to achieve (independence) is through dialogue, negotiation and agreement.”

In the coming weeks, Sanchez will hold his first meeting with Aragones, who has pledged to push a new referendum on self-determination – this time with Madrid’s approval – and a full amnesty that would allow other separatist leaders who fled abroad in the wake of the failed independence bid to return home, such as former Catalonia President Carles Puigdemont.

Both are out of the question for the Spanish government, which has been heavily criticised from across Spain’s political spectrum for issuing the pardons.

The far-right Vox party has denounced the move as a “betrayal” and pledged to challenge the decision in the courts.

Surveys also show that a majority of Spaniards are also against the move. 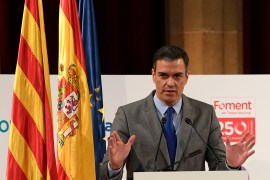 Right-wing opposition accuses leftist PM of caving in to pressure from separatist parties, which back the government. 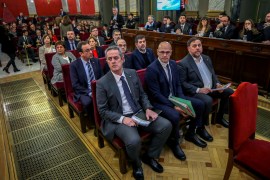 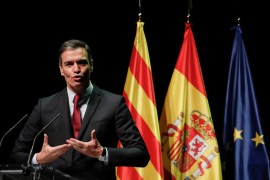 Pardons expected to be approved by cabinet on Tuesday, a move some analysts say could deepen divide.