Dozens of people have been reportedly killed after an air attack targeted a busy market in Ethiopia’s northern Tigray village of Togoga on Tuesday, a day after residents said fighting had flared north of the regional capital, Mekelle.

The bomb hit the market at approximately 1pm (10:00 GMT), according to a woman who told Reuters news agency that her husband and two-year-old daughter were injured in the attack.

“We didn’t see the plane but we heard it,” she said. “When the explosion happened, everyone ran out. Later, we came back and were trying to pick up the injured.”

A local medical official confirmed at least 43 fatalities, citing witnesses and first responders, according to Reuters.

Two doctors and a nurse in Mekelle told the Associated Press news agency they were unable to confirm how many people were killed, but one doctor said health workers at the scene reported “more than 80 civilian deaths”. The health workers spoke on condition of anonymity for fear of retaliation.

“There were lots of injured people and dead people,” a 20-year-old survivor, Birhan Gebrehiwet, whose house next to the market was destroyed, told AFP news agency. “We were stepping on them and in their blood.”

Birhan said she was selling drinks around lunchtime when the attack happened. “I am sure it came from the air,” she added.

‘Soldiers not letting us go’

The reported air attack comes amid some of the fiercest fighting in the Tigray region since the conflict began in November as Ethiopian forces supported by those from neighbouring Eritrea pursue Tigray’s former leaders.

Reuters reported that Ethiopian military spokesperson Colonel Getnet Adane did not confirm or deny the incident. He said air attacks were a common military tactic and the force does not target civilians.

“It must have been an Ethiopian jet, I don’t think that will come as a surprise to anyone.”

The European Union said the reports about the bombing were “extremely worrying”.

“EU strongly condemns deliberate targeting of civilians and those atrocities cannot be justified by using the preservation of the territorial integrity of Ethiopia as an argument,” Josep Borrell, the bloc’s foreign policy chief, said.

What is happening in #Tigray is appalling.

EU strongly condemns deliberate targeting of civilians and those atrocities cannot be justified by using the preservation of the territorial integrity of Ethiopia as an argument.@JanezLenarcic https://t.co/tc1j5CQX45

An emergency worker at a hospital in Mekelle, 30 kilometres (19 miles) away, said six wounded people had so far been admitted – including three young children – but that soldiers were preventing others from leaving Togoga.

“There are 45 injured people who are denied access, they risk death,” said the emergency worker.

An ambulance driver said he was also being prevented from driving to Togoga. “I tried to leave Mekelle four times today to try and help people, but the soldiers are not letting us go,” he said.

Three other health workers told Reuters that the Ethiopian military was blocking ambulances from reaching the scene.

Wounded patients being treated at Mekelle’s Ayder Hospital told health workers that a plane dropped a bomb on Togoga’s marketplace.

A nurse at the hospital said the wounded included a two-year-old child with “abdominal trauma” and a six-year-old. She added that an ambulance carrying a wounded baby to Mekelle was blocked for two hours and the baby died on the way.

Hailu Kebede, foreign affairs head for the Salsay Woyane Tigray opposition party and who comes from Togoga, told AP that one fleeing witness had counted more than 30 bodies and other witnesses were reporting more than 50 people killed.

“It was horrific,” said an official for an international aid group who told the AP he had spoken with a colleague and others at the scene.

“We don’t know if the jets were coming from Ethiopia or Eritrea. They are still looking for bodies by hand. More than 50 people were killed, maybe more.”

Witnesses said several more ambulances were turned back later in the day and on Wednesday morning, but one group of medical workers reached the site on Tuesday evening via a different route.

“We have been asking, but until now we didn’t get permission to go, so we don’t know how many people are dead,” said one of the doctors in Mekelle.

Another doctor said the Red Cross ambulance he was travelling in on Tuesday, trying to reach the scene, was shot at twice by Ethiopian soldiers who held his team for 45 minutes before ordering them back to Mekelle.

“We are not allowed to go,” he said. “They told us whoever goes, they are helping the troops of the TPLF.”

The TPLF refers to the Tigray People’s Liberation Front, which governed Tigray until it was overthrown by a federal government offensive in November. The subsequent fighting has killed thousands and forced more than two million people from their homes.

While the United Nations has said all sides have been accused of abuses, Ethiopian and Eritrean soldiers have been repeatedly accused by witnesses of looting and destroying health centres across Tigray and denying civilians access to care.

This month, humanitarian agencies warned that 350,000 people in Tigray are facing famine. Aid workers have said they have been repeatedly denied access to several parts of the region by soldiers.

The government of Prime Minister Abiy Ahmed says it has nearly defeated the rebels. But forces loyal to the TPLF recently announced an offensive in parts of Tigray and have claimed a string of victories.

Sudan, Egypt want international community to intervene ahead of Ethiopia’s plans to go ahead with the second filling.

Authorities unable to hold elections in four of Ethiopia’s 10 regions, says election board. 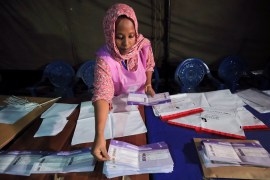 Prime Minister Abiy Ahmed expected to win election overshadowed by questions over its credibility and the Tigray war. 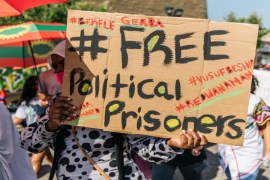