Russia has registered its highest number of COVID-19 deaths for a single day since early February as a dramatic rise in infections fuelled by the Delta variant grips the country.

Tuesday’s figure marked the highest rate of deaths over a 24-hour-period since February 11.

It came against the backdrop of a sharp uptick in cases that authorities blame on the highly transmissible Delta variant, first identified in India.

The number of new infections recorded on Tuesday was 16,715, a figure twice as high as a month ago.

Amid the surge, officials are pushing to speed up the slow rate of vaccination across the country.

Russia has approved four domestically made vaccines, but by June 2, only 18 million of its 144 million population had received at least one dose of a vaccine.

Authorities are now trying to coax and compel people to get vaccinated, offering those who do a chance to win new cars and flats, while threatening others who do not with loss of earnings and dismissal.

The Kremlin said on Tuesday that people who were not vaccinated against COVID-19 or did not have immunity would be unable to work in all workplaces in Russia and that those people could be discriminated against.

“The reality is such that discrimination will inevitably set in. People without vaccination or immunity will not be able to work everywhere. It is not possible. It will pose a threat to those around them,” Kremlin spokesman Dmitry Peskov told reporters.

Peskov’s comments came as the mayor of Moscow announced new pandemic restrictions, saying the situation in the capital where the Delta variant of the virus is spreading remains “very difficult”.

“The decisions that we’re making are difficult, unpopular, but necessary for saving people’s lives,” Mayor Sergei Sobyanin said in an online statement, adding that more than 14,000 people severely ill with COVID-19 remain in the city’s hospitals.

Sobyanin has attributed the infection spike to the Delta variant.

He banned all entertainment and sports events at which more than 500 people are present starting Tuesday.

And starting Monday, all restaurants, cafes and bars in Moscow will only allow in customers who have been vaccinated against COVID-19, recovered from the virus within the past six months or can provide a negative coronavirus test carried out in the previous 72 hours.

To prove their credentials, customers will need to obtain a QR code at one of several government websites.

Life in Moscow, as in most of Russia, has remained largely normal after lockdown restrictions were lifted last year.

Russian authorities resisted shutting down businesses or imposing another lockdown when infections soared in the autumn and winter, and continue to reject the idea of a lockdown during the current surge.

The Kremlin last week blamed the recent increase in cases on people’s reluctance to have vaccinations and “nihilism”. 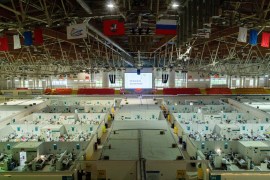 Mayor says the spread of the coronavirus infection ‘has sharply deteriorated’ in the Russian capital. 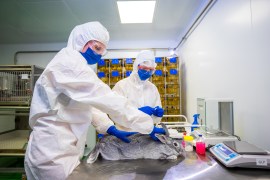 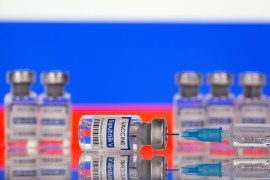 Countries in the bloc, where rollouts have been sluggish, consider adding the Russia-made vaccine to boost supplies.