Finland fought bravely but two goals from Belgium condemned them to a 2-0 defeat in St Petersburg on Monday and an anxious wait to see if their maiden tournament will continue at Euro 2020.

A draw would have given Finland the runners-up spot in Group B behind perfect Belgium but keeper Lukas Hradecky, who had an inspired game, was helpless when Thomas Vermaelen headed off the post and the ball rebounded off him into the net 15 minutes from time.

Finland’s last lingering hopes of automatic qualification ended when Romelu Lukaku fired in another and they finished third in Group B.

They must wait to see if they are one of the four best third-placed sides that reach the last 16.

“We didn’t reach the goal today to get at least one point to go through from the group stage so in that sense we’re disappointed,” said Finland coach Markku Kanerva.

“But overall I’m very proud of the work the team has done and the work they did against a very strong team today.”

World number one Belgium will face a third-placed team on Sunday in Sevilla with Denmark playing Wales in Amsterdam a day earlier.

“Until now it’s been OK but now it’s back to zero,” Belgium’s Kevin De Bruyne said. “We need to see who we’ll play. We’re in good in form and we’ll see what happens.”

Belgium coach Roberto Martinez said he was delighted with his team’s performance.

“To be able to see 90 minutes from Axel and Eden, and Kevin was almost on the pitch for 90 minutes, that was very satisfying. On top of that, every outfield player has been on the pitch in these three games. It is the perfect moment to go forward to the next game.”

Denmark beat Russia 4-1 elsewhere to take second on goal difference and leave Russia last with all three teams on three points behind Belgium on nine.

After Christian Eriksen’s collapse in the first game and the team’s two subsequent losses at home, Denmark finally was able to celebrate in front of their raucous and jubilant supporters at Parken Stadium.

“If anyone deserves this, it’s our players,” Denmark coach Kasper Hjulmand said. “I can’t imagine how they managed to come back from what they went through. So big credit to the boys.”

Eriksen – who wears No 10 for the national team – suffered cardiac arrest and had to be resuscitated with a defibrillator. He was released from the hospital on Friday.

Now a meeting with Wales awaits for Denmark in Amsterdam on Saturday. And a tournament that so nearly began with a tragedy could still turn into a triumph. 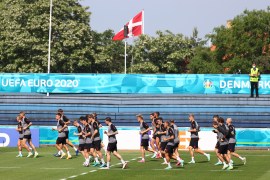 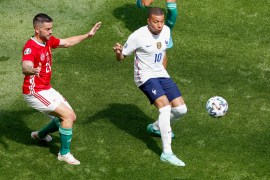 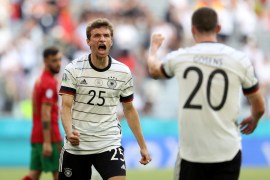