The United States, the European Union, Canada and The United Kingdom have imposed sweeping sanctions on Belarusian entities and officials and called on Minsk “to end its repressive practices against its own people”.

The allies also told the administration of President Alexander Lukashenko to cooperate with investigations into the forced landing of a Ryanair flight there in May and the arrest of the journalist Roman Protasevich and his girlfriend Sofia Sapega, who were on board.

“We are united in our deep concern regarding the Lukashenko regime’s continuing attacks on human rights, fundamental freedoms, and international law,” the four said in a joint statement on Monday.

“We are committed to support the long-suppressed democratic aspirations of the people of Belarus and we stand together to impose costs on the regime for its blatant disregard of international commitments,” they said.

The coordinated action reflected growing Western frustration over Belarus, which plunged into crisis last year when street protests erupted over what demonstrators said was a rigged presidential election.

There was no immediate reaction from Lukashenko who has so far ridden out the storm with a crackdown, denied rigging the vote and accused journalist Roman Protasevich of plotting a revolution.

The veteran leader has increasingly turned to Russia for support.

The four called on Minsk to cooperate with an international probe into the plane incident, immediately release all political prisoners, and “enter into a comprehensive and genuine political dialogue” with the democratic opposition and civil society.

The EU said it was imposing travel bans and asset freezes on 78 officials – including the Belarusian defence minister and transport minister, its air force commander, judges and lawmakers – as well as entities, which are usually companies, banks, or associations. It means that a total of 166 people and 15 entities are now under EU restrictive measures.

At a meeting in Luxembourg, the bloc said it was also drawing up economic sanctions that Austria said would “tighten the thumbscrews” on the Belarusian government.

“This decision was made in view of the escalation of serious human rights violations in Belarus and the violent repression of civil society, democratic opposition and journalists,” a statement said.

EU foreign policy chief Josep Borrell, who chaired the meeting, said the economic sanctions “are going to hurt … the economy of Belarus heavily”.

EU states are also soon set to impose economic sanctions on Belarus’s financial, oil, tobacco and potash sectors after a provisional deal was agreed on Friday.

The bloc will ban exports to Belarus of any communications equipment that could be used for spying, and tighten an arms embargo to include rifles used by biathletes, officials said.

Belarusian opposition figure Sviatlana Tsikhanouskaya welcomed the announcements. “The European Union decided they deserve these sanctions,” Tsikhanouskaya told reporters in Brussels. “I agree … We have to end the situation in our country, we don’t want it to become North Korea.”

Meanwhile, the US Treasury Department in a statement said it blacklisted 16 people and five entities in response to the Lukashenko government’s “escalating violence and repression”, including the forced landing of the flight.

The US action targeted close associates of Lukashenko, the Treasury said, including his press secretary and the chairperson of the Council of the Republic of the National Assembly, the Belarusian Parliament’s upper house.

The UK said it had imposed travel bans and asset freezes against “senior-ranking officials”, as well as oil firm BNK (UK) Ltd.

“The sanctions send a strong signal to the Belarusian authorities that the UK will not tolerate those who repress human rights coming to the UK or using our financial institutions,” the foreign office said in a statement.

Britain said its sanctions were imposed separately to the EU, which it left last year, but in parallel to those announced by Washington, Ottawa and Brussels.

The British foreign office said the restrictions on BNK (UK) Ltd, which exports Belarusian oil products, would “significantly impact one of the regime’s main revenue streams”.

“We will hold the regime to account in coordination with our allies including through further banning travel, freezing assets and cutting off oil export revenue streams.”

In September last year, the UK announced sanctions on human rights grounds against Lukashenko, his son and senior figures in the Belarusian government. 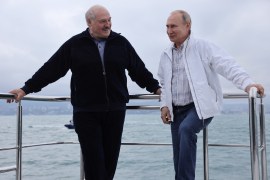 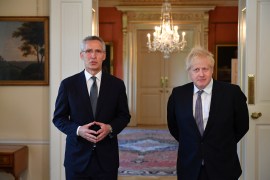 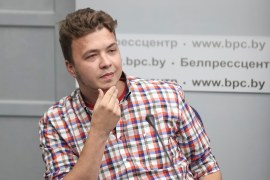 Opposition says Roman Protasevich was paraded as a ‘trophy’ in news conference appearance.