Turkey’s Constitutional Court has ordered the country’s main pro-Kurdish Peoples’ Democratic Party (HDP) to go on trial over alleged links to Kurdish fighters, a case that has drawn sharp condemnation from the West.

The move came on Monday after prosecutors earlier this month filed a new indictment before the Constitutional Court in a bid to dissolve the leftist HDP – the country’s third-largest party in parliament.

The original paperwork filed in March was rejected by the top court’s judges to fix shortcomings and the indictment was reintroduced by prosecutors on June 7.

The court accepted the refiled indictment, but rejected a request “at this stage” to block the HDP’s bank account where it receives treasury aid, the Anadolu state news agency reported.

The government of President Recep Tayyip Erdogan accuses the HDP of being a political front for the outlawed Kurdistan Workers’ Party (PKK).

The PKK, listed as a terrorist group by Ankara and its Western allies, has waged an armed rebellion against the Turkish state since 1984 that has killed tens of thousands of people.

Erdogan’s influential right-wing junior alliance partner, the Nationalist Movement Party (MHP), has repeatedly called for the HDP to be banned.

The HDP denies formal links to PKK and says any attack by Erdogan’s ruling AKP and the MHP is retribution for its strenuous and unwavering opposition to the government.

Western powers also view the case against the party in a political light.

The US Department of State said in March that a ban would “further undermine” democracy and the European Union said the party’s closure “would violate the rights of millions of voters in Turkey”.

The court ruling came four days after an attack on an HDP provincial office in western Turkey, which critics attributed to the increasingly tense rhetoric against the party.

A gunman killed HDP member Deniz Poyraz in a shooting on Thursday in Izmir that the HDP blamed on the ruling party as an “instigator of this brutal attack”. 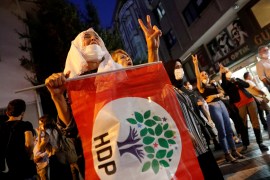 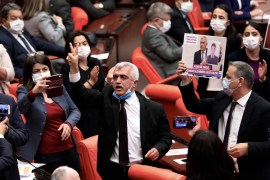 US warns that efforts to remove legislator Omer Faruk Gergerlioglu, over a 2016 social media post, is ‘troubling’.

Move comes days after a top public prosecutor demanded the dissolution of the HDP, the third-largest party in Turkey.