By Tamila Varshalomidze and Mersiha Gadzo

Israeli opposition leader Yair Lapid has moved closer to unseating Prime Minister Benjamin Netanyahu as he officially informed the country’s president that he has reached agreements with political allies to form a new coalition government.

Lapid, of the centrist Yesh Atid party, reached a historic deal with Mansour Abbas, head of the United Arab List, to form the coalition shortly before a midnight (21:00 GMT) deadline on Wednesday.

Lapid’s main partner is far-right nationalist Naftali Bennett, and the pair have reached an agreement to rotate the prime minister position.

Their coalition government includes parties from across the political spectrum, including for the first time in Israel’s history a party that represents the country’s 21-percent Palestinian minority.

The agreement still needs to be approved by the Israeli parliament, in a vote that is expected to take place as early as next week. If it goes through, Lapid and his partners will end Benjamin Netanyahu’s record-setting, 12-year rule.

‘Everything to unite Israeli society’: Lapid

In a statement on Twitter, Lapid said he has informed the country’s president of the deal.

“This government will work for all the citizens of Israel, those that voted for it and those that didn’t. It will do everything to unite Israeli society,” he said.

Bennett to serve as PM, Lapid will be alternate PM

Bennett, head of the right-wing Yamina party, is to serve as the next Israeli prime minister and Lapid will serve as alternate prime minister, the president’s office has said.

It is official. Israel has a new government. pic.twitter.com/czpzhVIeR5

Lapid notifies president he has a coalition: Statement

Lapid has informed Israel’s president that he has the votes needed to form a coalition government to remove Netanyahu.

“Lapid informed the president of the state of Israel … that he has succeeded in forming a government,” his party said in a statement.

Mansour Abbas has joined a coalition to remove Netanyahu at the eleventh hour.

“The chairperson of Ra’am (United Arab List), Mansour Abbas, signed a document which allows the chairperson of Yesh Atid, Yair Lapid, to inform the president he has succeeded in forming a government after agreements were reached,” Lapid’s spokesman said in a statement.

Lapid’s Yesh Atid party has formed a coalition government, his spokesman has said, and he will inform President Reuven Rivlin later on Wednesday.

Surreal: Mansour Abbas – leader of United Arab List or Ra'am – signed to allow the formation of an Israeli government that would be headed by far Right Yamina leader Naftali Bennett . Israeli media in a frenzy over this #Israel

The move now allows for the formation of a coalition Israeli government “that would be headed by far Right Yamina leader Naftali Bennett”, Abdel-Hamid wrote on Twitter. “Israeli media (is) in a frenzy over this”.

Yamina MK Nir Orbach is considering whether to oppose the proposed government, Channel 12 news reported. The move “could very likely sink its chances of being formed”, The Times of Israel said.

“Reports have previously said that Orbach has considered resigning rather than vote to back the government”, The Times of Israel reported.

Only two hours remain until a deadline to form a new government coalition expires.

Lapid must inform Israel’s largely ceremonial president, Reuven Rivlin, by midnight if he has formed a majority coalition of at least 61 Knesset seats. The assembly would then have a week to hold a vote of confidence.

If Lapid misses the deadline, Israel will almost certainly have a fifth election in just over two years and Netanyahu would have yet another chance to hold onto his position as he stands trial for corruption.

As Mansour Abbas, head of the United Arab List, arrived at the hotel in Ramat Gan for negotiations in the final hours, Israeli political correspondent Tal Schneider called it a “historic moment”.

“For the first time in Israel history an Arab party will become a part of a coalition,” Schneider wrote.

Islamist movement’s party leader has arrived Ramat Gan hotel for final hour negotiations. This is truly an historic moment. For the first time in Israel history an Arab party will become a part of a coalition #changebloc https://t.co/xRBRo4VmAi

The Shura Council has given the green light for United Arab List leader Mansour Abbas to agree to Lapid declaring that he can form a government, Channel 12 news has reported.

The network said the go-ahead is on condition of continued negotiations over the Kaminitz Law – which gives authorities more power to enforce demolition and eviction orders, and which Palestinian citizens of Israel say unfairly targets them – and unrecognised Bedouin villages in the southern Negev (Naqab) region, The Times of Israel reported.

The Yamina and New Hope parties have not yet formally signed up for the government.

Mansour Abbas arrives to summit meeting at which the future government will arise or fall.
Photo: @SuleimanMas1 pic.twitter.com/JtKUgvw2mt

Right wing to be given justice, foreign, interior ministries in second half of rotation

An agreement has been reached that if a government is established, the second half of the rotation will have New Hope head Gideon Sa’ar as foreign minister, Yamina’s Ayelet Shaked as justice minister and Yamina leader Naftali Bennett as interior minister, Haaretz has reported.

Hundreds protest for and against government

Hundreds of people are protesting for and against the formation of the new government outside the conference centre in Ramat Gan, where Bennett and Mansour Abbas, leader of the United Arab List are meeting, Israeli political correspondent Tal Schneider has reported.

I am here at Ramat-Gan, the place where the political negotiations for the #changebloc are taking place. Both ends of the designated coalition – @naftalibennett @mnsorabbas -a religious Zionist party leader & Islamist movement leader are on their way here with less than 5h to go https://t.co/Xf8DBt9b0o

If Bennett and Abbas finalise issues, Lapid will call President Reuven Rivlin to update him.

“Later on, he will call speaker of the Knesset and the plenum will convene within a week to swear in the new government,” Schneider wrote on Twitter.

“However, it seems that some MKs from Yamina [Bennett’s party] do not want this to go forward, hence it may all collapse.”

United Arab List MK ‘not optimistic’ a deal will be reached

Mazen Ghanaim, United Arab List Member of Knesset (MK) has told Kan public broadcaster that he is “not optimistic” that a deal will be reached to form a government, despite reports of progress, The Times of Israel reported.

“We had the courage to say that we want to be a legitimate player in Israeli politics, but apparently our declarations won’t bear fruit in the end,” Ghanaim told Kan.

“Mansour Abbas [head of the United Arab List] is attacked from all sides – from within the Arab community, also from the Israeli right. Despite this, he is sitting at Kfar Maccabiah for two days already to bring an achievement for the Arab community. From what is happening in the negotiations behind closed doors, I’m not optimistic,” Ghanaim said.

Negotiations are still under way to form a new coalition government to replace Netanyahu.

Lapid has until Wednesday at 11:59pm (20:59 GMT) to inform President Reuven Rivlin and Knesset Speaker Yariv Levin that he can form a new government.

If he cannot do so, any MK could then try to build a coalition with the support of a majority of 61 MKs.

If legislators cannot agree on another candidate for prime minister, Israelis could return, yet again, to the polls.

With less than six hours left until the deadline to form a new government, the “main thing holding things up is the disagreement between [United Arab List, also known as Ra’am] and the right-wing parties on the extent of retroactive permits for illegal buildings in the Arab sector,” Haaretz writer Anshel Pfeffer wrote on Twitter.

“Ra’am’s Shura council currently convened to decide whether to go ahead.

“This is the first time that the formation of a new Israeli government has hinged on the ruling of a Shura Council, so that’s something at least, whatever the outcome,” Pfeffer wrote.

This is the first time that the formation of a new Israeli government has hinged on the ruling of a Shura Council, so that’s something at least, whatever the outcome.

Likud has called on its ministers and Knesset members to gather outside the convention hall in Ramat Gan where the coalition-building talks are taking place to protest against the formation of a new government, Israeli media has reported.

📣 With 6 1/2 hours to go, Netanyahu calls on Likud ministers & Knesset members to demonstrate outside the convention hall in which coalition negotiations are taking place. pic.twitter.com/LvmcAIYayj

This would be the most diverse government in Israel’s history, both ethnically and politically https://t.co/u1xfAGQA8H

‘Our demands are clearly known’: Abbas

Mansour Abbas, leader of the United Arab List has played down allegations that he changed his demands in negotiations with Lapid, Haaretz has reported.

In an interview with Channel 12, Abbas said his party “wants to achieve things for the benefit of Arab society. We have no disputes about roles and authority,” Haaretz reported.

Abbas said in negotiations with Lapid he has “put forward demands regarding the Arab citizens of the country who want a solution to the housing crisis and the municipal status of unrecognised localities in the Negev”.

“We stick to this principle and our demands are clearly known. They are not difficult,” he said.

According to Kan news reports, Ze’ev Elkin of the New Hope party has told Likud MKs that demands of the United Arab List on construction for Palestinian communities “are impossible for me and for [Ayelet] Shaked. We will not agree to them under any circumstances,” The Times of Israel reported.

Elkin is one of the leading negotiators in forming a so-called change government, The Times of Israel said.

Mansour Abbas, leader of the United Arab List, also known as Ra’am, has aimed to revoke a law that has hardened penalties for illegal construction, which is seen to affect Palestinian communities disproportionately.

Herzog, 60, beat former head teacher Miriam Peretz to replace President Reuven Rivlin, who was elected in 2014 to the largely ceremonial position decided by the Knesset.

Herzog, who will assume his position on July 9, succeeded Peretz, 67, who lost two children in Israel’s wars and is known as “the mother of sons”.

Who is Yair Lapid?

A centrist opposition leader, Yair Lapid was once known largely for his successful career as a journalist and popular television host.

He is the Tel Aviv-born son of the fiercely secular former Justice Minister Yosef “Tommy” Lapid, who also left journalism to enter politics. 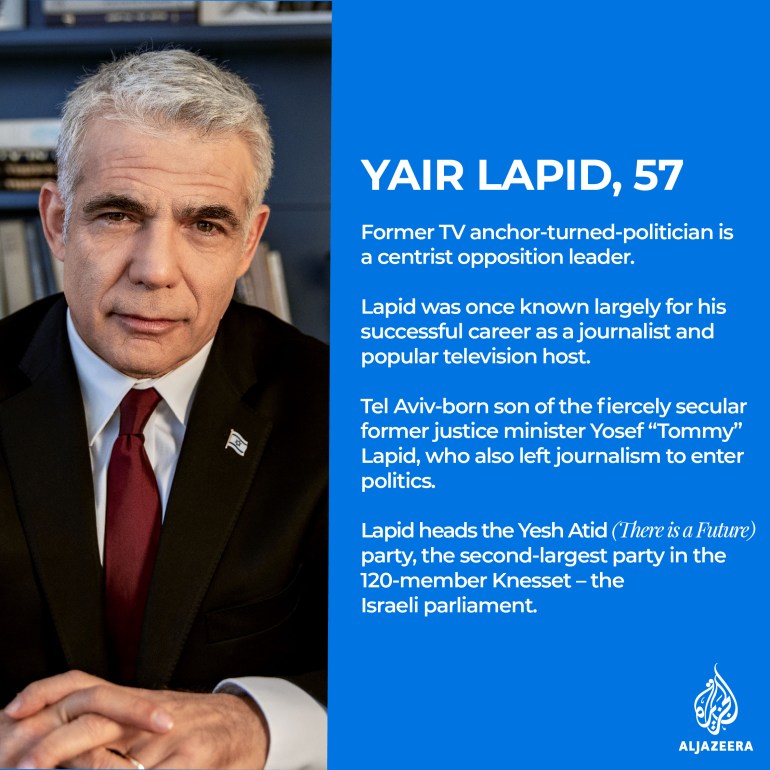 Yair Lapid’s negotiations to establish the so-called “coalition for change” appeared to have stalled, according to Israeli daily newspaper Yediot Ahronot.

Its report cited sources familiar with the details of the talks saying that many outstanding issues have already been resolved, including ministerial appointments.

However, there is still disagreement over a seat on the committee for judicial appointments, a position already promised to Labour leader Merav Michaeli.

Another obstacle appears to be the demand of Ra’am leader Mansour Abbas to reverse, or at least temporarily suspend, a law that facilitates the demolition of homes built in violation of code, most prevalent in Arab communities.

Bennett is a multimillionaire former tech entrepreneur who made a name in politics with right-wing, religious-nationalist rhetoric.

Israel’s opposition leader moved closer to unseating Netanyahu after agreeing to terms with several parties, including one led by Defence Minister Benny Gantz.

Yair Lapid’s Yesh Atid party and Gantz’s centrist Blue and White said in a joint statement they had “agreed on the outlines of the government and core issues relating to the strengthening of democracy and Israeli society”. 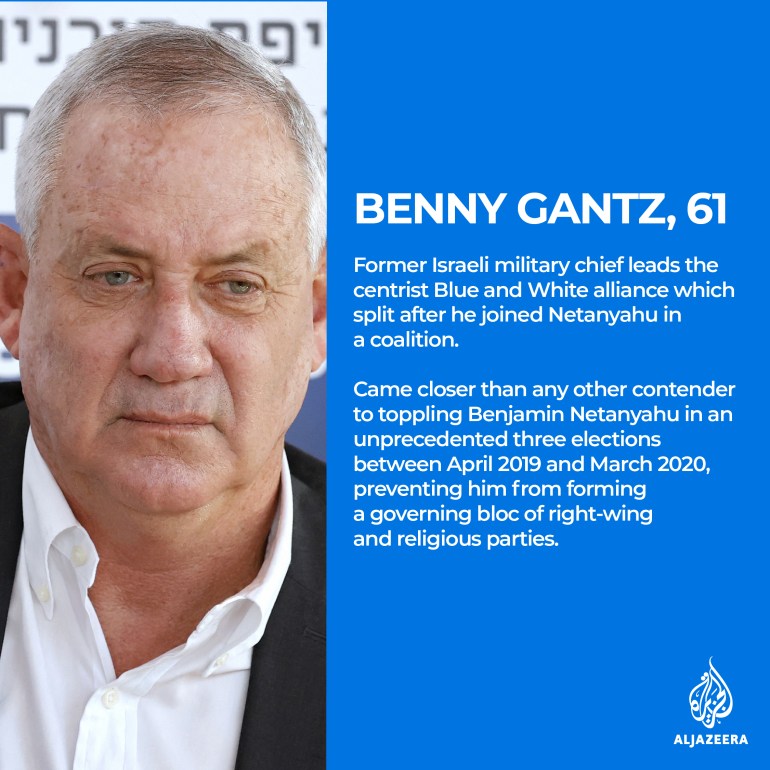 Israeli politicians battling to unseat Netanyahu are racing against the clock on the final day of talks to build a governing coalition comprised of bitter ideological rivals.

They have until a minute before midnight (20:59 GMT) on Wednesday to cobble together an administration that would end 12 years of rule by Israel’s longest-serving prime minister.