The UN General Assembly has stopped short of calling for a global arms embargo against Myanmar’s military, even as it took the rare step of urging member states to “prevent the flow of arms” into the violence-wracked country following the February 1 coup.

The resolution condemning the coup also demands that the military “immediately stop all violence against peaceful demonstrators”, who continue to take to the streets every day, including on Saturday, which also marks the birthday of the country’s ousted leader, Aung San Suu Kyi.

It was approved on Friday by 119 countries, with 36 abstaining including China, Myanmar’s main ally. Only one country, Belarus, voted against it. It was sponsored by some 60 countries.

“We must advocate for the protection of all fundamental human rights, including freedom of expression, access to information and peaceful assembly which have been repeatedly infringed upon by the military in Myanmar,” Turkey’s Volkan Bozkir, president of the 75th UN General Assembly said in a statement.

At the meeting, UN special envoy on Myanmar Christine Schraner Burgener also warned the 193-member body that “the risk of a large-scale civil war is real” in the country.

“Time is of the essence. The opportunity to reverse the military takeover is narrowing,” Schraner Burgener said after the General Assembly adopted the non-binding resolution.

Hundreds of thousands of refugees are currently fleeing from violence in the country following clashes between the military and ethnic groups.

The vote came on the same day that the Security Council was holding informal talks on the situation in the Southeast Asian nation, where the military deposed Aung San Suu Kyi in February.

The resolution was not passed by consensus, as had been hoped, but rather through a vote, forcing all 193 UN countries to reveal their views.

In a quirk of history, Myanmar’s envoy to the world body, Kyaw Moe Tun, voted in favour of the text. He has passionately rejected the coup and brushed aside the military’s claims that he no longer represents Myanmar. The United Nations still considers him as the rightful envoy.

After the vote, the diplomat voiced regret that it had taken three months for the Assembly to adopt the resolution and that it was not more explicit about an arms embargo.

“The military is still operating in its own twisted reality,” while ignoring calls to halt the violence,” he said.

“The people inside and outside the country are determined to stop the illegal military rule and to restore democracy.”

Anthony Nelson, an analyst at the Albright Stonebridge Group business strategy firm, said that many countries who abstained from voting on the resolution wants to preserve their ties with Myanmar’s military government.

“It certainly falls short of expectations of some of the protesters in Myanmar, who have been calling from Day One about the responsibility to protect,” Nelson said, adding that it is likely at a UN Security Council resolution for a full arms embargo will be vetoed.

Among the countries that abstained were Russia, Mali – where a second military coup in less than a year recently took place, Iran, Egypt, Brunei, Cambodia, Laos and Thailand.

The UN General Assembly very rarely adopts resolutions condemning military coups or calling for limits on the arms supplied to the target country.

“It is the broadest and most universal condemnation of the situation in Myanmar to date,” said Olof Skoog, the European Union’s ambassador to the UN.

“The EU is proud of the resolution just adopted by the UN General Assembly. It sends a strong and powerful message. It delegitimises the military junta, condemns its abuse and violence against its own people and demonstrates its isolation in the eyes of the world,” he said.

In a statement, Amnesty International said that the next step for the UN is for the Security Council to make resolution mandatory by imposing a comprehensive global arms embargo.

“It is a helpful sign that 11 of the 15 members of the Security Council voted in support of this resolution. China and Russia, having abstained on the vote to adopt this resolution, should also now refrain from obstructing the will of the international community by vetoing a Security Council resolution to impose a comprehensive global arms embargo on Myanmar.”

The resolution also calls for a restoration of democracy in Myanmar, and the release of all detained civilian leaders.

“We absolutely must create the conditions for democracy to be reinstated,” said UN Secretary-General Antonio Guterres before the vote on the resolution, hoping for a “very clear message” from the General Assembly.

“We cannot live in a world, where military coups become a norm. It is totally unacceptable.”

It asks for the implementation of a five-point plan drafted by ASEAN in April including the naming of an envoy from the bloc.

The text also calls on the military to allow the UN’s representative, Burgener, to visit the country, and for safe passage of humanitarian aid.

Burgener briefed the Security Council during its closed-door meeting on Myanmar on Friday. No joint statement was adopted at that meeting because of persistent divisions between its members, diplomats told AFP.

We must raise our voices for those who have been silenced. We must advocate for the protection of all fundamental human rights, including freedom of expression, access to information & peaceful assembly which have been repeatedly infringed upon by the military in #Myanmar. pic.twitter.com/vbpSbjNo9A

“Months of atrocities and grave human rights abuses by the junta’s security forces have shown time and again why no government should be sending them a single bullet. The UN Security Council should now step up and pass its own resolution imposing a global arms embargo on Myanmar,” said Louis Charbonneau, UN director at HRW.

The resolution is an opportunity “to show that the world stands with the people of Myanmar, and not the military” who “committed horrific acts of violence against ordinary civilians,” said British Ambassador to the UN Barbara Woodward.

More than 860 civilians have been killed in Myanmar since the coup, according to the UN and the Association for the Assistance of Political Prisoners (AAPP).

On Friday, two people were killed when a military truck exploded in one of two blasts near an office of an army-backed political party in the country’s biggest city, Yangon. Local media reported, and a senior rescue official said six other people were wounded.

There were also reports of an enormous fire in Monywa, the largest city in the Sagaing region, although the cause of the incident was not immediately determined.

On Saturday, hundreds of people marched across the country to mark the date of birth of Aung San Suu Kyi. Many protesters wore flowers, which is symbolic of the country’s detained leader.

Fire broke out at Ahlone Battalion Market near Northwest Military Headquarters circa 9:30 pm during curfew hours and STILL burning.#WhatsHappeningInMyanmar pic.twitter.com/Esn52AP1OH 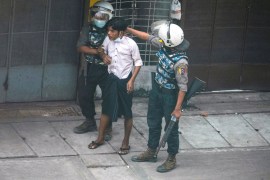 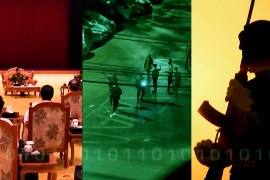 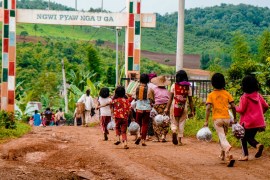 Refugee numbers worldwide increase for a ninth year in a row as people continue to be displaced amid the COVID crisis.