Lima, Peru — More than most presidents-elect, Pedro Castillo, Peru’s apparent new leader, will need to put his transition team to work as soon as possible.

On the one hand, a third wave of the coronavirus pandemic looks increasingly likely in the Andean nation, which already has by far the world’s worst per capita COVID-19 mortality. The highly contagious Delta variant has just been detected in Arequipa, with the authorities scrambling to cut off Peru’s second city from the rest of the country.

On the other, Castillo, 51, a radical left outsider who no one — apparently including the candidate himself — expected to win, ran a chaotic campaign, frequently contradicting himself and delaying for weeks revealing whether he even had a policy team, claiming that he did not want his expert advisers to be “stigmatised” by the media.

Even many of those who voted for the village school teacher and union leader from the impoverished Cajamarca region, in the northern Andes, question whether he is ready for the historic challenges of leading Peru out of the twin public health and economic crises once he is sworn in on July 28, the 200th anniversary of Peruvian independence.

Yet no transition can begin until a series of unprecedented legal challenges from his opponent, Keiko Fujimori, daughter of the imprisoned 1990s’ despot Alberto Fujimori, are resolved. She is making unsubstantiated claims of electoral “fraud”.

They come despite international election observers, including from the Organization of American States, praising Peru’s electoral authorities for running a transparent, clean and fair election with no significant irregularities.

Fujimori, 46, is seeking to throw out nearly 200,000 ballots, mainly from Indigenous and mixed-race voters from impoverished Andean regions that voted heavily for Castillo. According to the official vote count, Castillo has a razor-thin lead of 40,000 votes out of the 18.8 million cast, but cannot be officially declared president-elect until Fujimori’s challenges are resolved — a process that could take weeks.

The stakes could not be higher for Fujimori, whose father once used army tanks to shutter Congress before his regime eventually collapsed amid accusations of electoral fraud and cleptocracy. He is serving a 25-year sentence for ordering extrajudicial killings. Now his daughter is facing a trial of her own, for allegedly laundering $17m and a potentially lengthy jail sentence — unless she acquires presidential immunity.

Her critics are likening her tactics to those of former US President Donald Trump’s refusal to accept his loss in the November 2020 election, with a similar damaging effect for Peru’s brittle democracy.

Fujimori’s supporters have picketed the homes of the head of the Andean nation’s electoral agency and members of the JNE, the electoral tribunal tasked with resolving her appeals.

They have also launched a tsunami of often racially-tinged social media attacks against Castillo’s allies, journalists and anyone else questioning Fujimori’s hardball tactics, accusing them of being “communist” and even “terrorists”. That prompted Michelle Bachelet, the United Nations high commissioner for human rights to issue a statement condemning “hate speech and discrimination” and urging all Peruvians to accept Castillo’s apparent victory.

“The Fujimoristas have created this idea of anti-communism as a façade to allow people to let their racism out,” José Ragas, a Peruvian historian at the Catholic University of Chile, told Al Jazeera. “Fujimori’s only solution is to die taking everyone with her.”

When he is eventually confirmed the winner, as independent observers expect, Castillo will face a momentous task in righting Peru’s listing economy and guiding its polarised society past the pandemic — even as many Peruvians doubt his legitimacy.

The country’s economy shrank 11 percent last year and plunged millions back into poverty, including more than one million children. Although the outgoing government of interim President Francisco Sagasti has signed contracts for 60 million COVID-19 vaccines, so far less than 5 percent of the population of 32 million people have been fully vaccinated.

But it remains unclear what direction Castillo’s administration will take. He initially campaigned on the far-left platform of his party, Free Peru, which repeatedly cited Karl Marx, Vladimir Lenin, and Fidel Castro, and proposed nationalising large chunks of the national economy. “No more poor people in a rich country,” was his campaign slogan.

Flagship promises included renegotiating contracts with foreign mining companies to force them to leave 70 percent of their profits in the country and dedicating 20 percent of gross domestic product (GDP) to healthcare and education — a promise no economist takes seriously.

Yet there is a possibility that Castillo will moderate his policies and choose a centre-left cabinet.

He may have little choice if he wants to avoid a fruitless and dangerous standoff with a fragmented, populist, right-leaning incoming Congress. Despite being the largest party, Free Peru will have just 37 lawmakers in the single-chamber 130-member body.

Yet he may also prove ideologically more flexible than many in Free Peru, of which he is not a member and whose presidential nomination he won at the last minute after the party’s founder was barred from running because of a corruption conviction.

“Identity politics is never far from the surface in Peru. Ideological differences are much more important in Lima than in the rest of the country,” Anthony Medina Rivas Plata, a political scientist at the Santa Maria Catholic University of Arequipa, told Al Jazeera.

“Castillo’s rise is not because he is left-wing, but because he comes from below. He has never said he is a Marxist, socialist or communist. What he is, is an evangelical.”

Yet his religious beliefs could also pose a problem for his ability to govern. A social conservative, he opposes LGBTQ rights and abortion, placing him at odds with the progressive left, whose support he will need to be able to govern.

Diana Miloslavich, who heads the Flor Tristan Women’s Center, a feminist NGO, said: “I am hopeful. He will need to form a broad coalition and gender issues will be part of that. They’re not just important to many of us on the left now, but also those in the centre. The demands that Castillo represents must include the feminist agenda.” 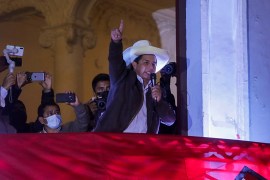 Left-wing candidate Castillo is 44,058 votes ahead of Keiko Fujimori, the daughter of an imprisoned former president. 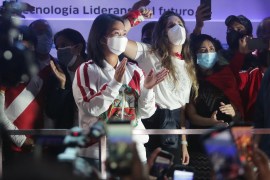 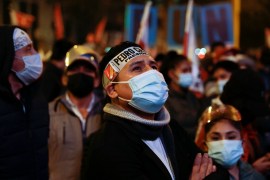 The nation’s electoral authority has not confirmed the win, but Pedro Castillo holds a tiny margin over Keiko Fujimori. 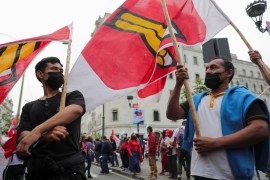 Pedro Castillo has thin lead over Keiko Fujimori after what one expert says is ‘one of country’s tightest elections’.