The US state of Texas is transferring inmates from a state prison to make room for detained migrants, prison authorities said, amid sustained efforts by Governor Greg Abbott to rein in the number of Central American migrants coming from Mexico.

Texas Department of Criminal Justice (TDCJ) spokesman Jeremy Desel announced on Thursday that the prison system began moving inmates from the Dolph Briscoe Unit prison in Dilley to other prisons.

“The state of Texas continues to deal with a record-high influx of individuals illegally crossing the border,” Desel said in the statement. “To address the ongoing crisis, Governor Abbott is directing state resources to arrest and confine those individuals crossing the border unlawfully and who have committed a state or federal crime.”

More than 180,000 migrants attempted to cross the border in May, a 20-year high, according to the US Customs and Border Protection Agency (CBP).

Abbott on Wednesday announced that the state’s jails were looking for additional bed space to house the rising number of people being arrested.

Abbott also announced he would spend $250m in state money as a “down payment” to continue the construction of a wall along the Texas border with Mexico that then-President Donald Trump started.

He said the rest of the funds would be collected through donations and crowdsourced financing.

Trump made the building of a wall along the border a signature part of his presidency, saying it was needed to stop migrants and criminals from coming to the US. And he said Mexico would pay for the wall.

But Mexico did not pay for it. Instead, the Trump administration diverted $16.45bn in federal money to fund the construction that was never completed.

On January 20 – his first day in office – Trump’s successor President Joe Biden issued an executive order that paused wall construction, saying: “A massive wall that spans the entire southern border is not a serious policy solution.”

Biden’s order was the first in a series of moves to undo many of the Trump administration’s immigration curbs and to put in place what the Biden administration has called more humane policies.

But Biden’s policies have also spurred a rush to the southern border by tens of thousands of migrants hoping the more lenient practices will offer them a way into the US.

Abbott’s measures may be subject to legal challenges as the US Supreme Court has consistently ruled that immigration law enforcement is the exclusive province of the federal government.

However, Abbott has been scathing in his criticism of the Biden administration’s immigration and border protection policies. A spokeswoman of Abbott repeated those criticisms in a statement on Thursday.

“While President Biden continues to ignore the crisis on our southern border and his duties to our country, Texas is stepping up and upholding the rule of law,” said spokeswoman Renae Eze.

Trump, Abbott and other Republicans have criticised Biden for rolling back Trump-era immigration restrictions, saying he is to blame for the rise in the number of migrants arriving at the border.

On Wednesday, Florida’s Republican Governor Ron DeSantis announced that his state would dispatch law enforcement officers to support Texas and Arizona to rein in migration.

The border crisis is a created crisis stemming from bad policy choices. Texas and Arizona have asked Florida for help to do what Washington won't — SECURE OUR BORDER. pic.twitter.com/2sJGVKynjH

Trump plans to visit the Texas-Mexico border later this month with Abbott.

“We went from having border security that was the envy of the world to a lawless border that is now pitied around the world,” Trump said in a statement on Tuesday announcing he had accepted an invitation from Abbott to visit the border on June 30. 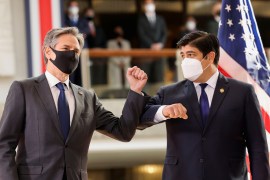 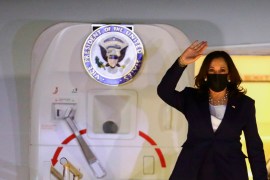 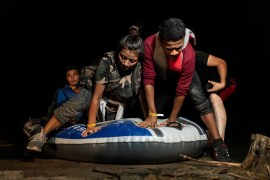 More than 180,000 migrants crossed into the US border in May, a 20-year high and up slightly from last month.