At least nine Palestinians were hurt after Israeli forces stormed the Al-Aqsa Mosque compound in occupied East Jerusalem on Friday.

Following Friday prayers, Palestinian worshippers started a rally in support of the Prophet Muhammad in response to insults directed at him during a hardline Israeli march through the area on Tuesday.

Palestinians gathered in the courtyard, but before they began their march from Al-Aqsa to the Old City’s Damascus Gate, Israeli forces raided the compound through Bab al-Silsila, one of its entrances.

Israeli police said they arrested 10 Palestinians at the compound.

Hundreds demonstrated after Friday prayers in response to a rally held by Jewish ultranationalists on Tuesday, in which dozens chanted “Death to Arabs” and “May your village burn”.

The Palestinians protested against insulting Prophet Muhammad after an online video showed some of the participants in the Tuesday march denigrating him.

The Middle East Eye reported Israeli forces shot one of its journalists, Latifeh Abdelatif, in the knee with a rubber-coated round as they raided the Al-Aqsa Mosque compound.

The London-based news website said one of its contributors, Sondus Ewies, was also wounded, but the extent of her injuries remained unclear.

The incidents come hours after Israeli fighter jets launched a series of air raids on the Gaza Strip for the second time since a shaky ceasefire ended last month’s 11-day war.

The raid comes as a fragile ceasefire that came into effect less than a month ago holds in the besieged Gaza Strip, ending the Israeli bombing campaign that killed at least 256 people, including 66 children.

Another Israeli police crackdown on worshippers at the Al-Aqsa Mosque compound during Ramadan and the threat of forced expulsions of Palestinians from their homes in occupied East Jerusalem ignited protests across the occupied Palestinian territories. Israeli forces violently put those down as well.

Hamas, the group that controls the Gaza Strip, issued a deadline to Israel to halt the crackdowns. It passed unheeded, resulting in Hamas firing rockets towards Israel, and Israel launching an intensive bombing campaign on Gaza.

Over the past few weeks, hardline Israeli settler groups have entered the premises on a near-daily basis, under heavy protection from Israeli troops. The groups’ objective is to rebuild the Third Jewish Temple on the grounds of Al-Aqsa Mosque, according to their websites.

But under the status quo affirmed in 1967, only Muslims can pray within al-Haram al-Sharif.

Palestinians fear Israel plans to eventually take the compound over or partition it. The Israeli government has repeatedly said it has no intention of changing the status quo, under which the Waqf oversees the site.

Meanwhile, at least 47 Palestinians were injured by Israeli forces near the town of Beita, south of Nabulus in the occupied West Bank, according to the Palestine Red Crescent.

Israeli forces fired tear gas and rubber-coated bullets at a demonstration against the recent establishment of an illegal Israeli outpost near Beita.

Beita has turned into a bloody battleground for several weeks as Israeli forces target Palestinian protesters demonstrating on a near-daily basis against the continuing takeover of their land on Mount Sabih by Israeli settlers.

Israeli settlers are currently building an illegal settlement and threatening the livelihoods of at least 17 Palestinian families – more than 100 people – who depend on harvesting their olives on land they have owned for generations. 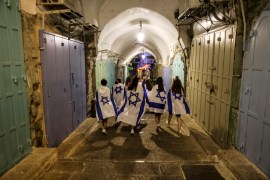 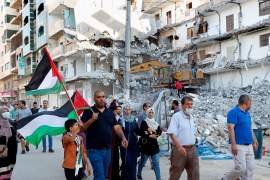 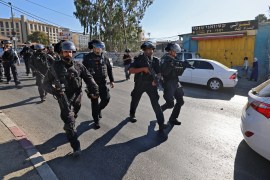 Mai Afanah, 29, from Abu Dis, was shot by Israeli forces and left bleeding at the scene, Palestinian media reported.