Ikizdere, Turkey – Moving methodically as she cuts tea leaves from her plantation clinging to the side of a mountain between Cevizlik and Gürdere villages, Pervin Baş said her livelihood is now threatened by a massive quarry being built in the valley below.

Since moving to the exceptionally picturesque region of Rize province on Turkey’s Black Sea coast 30 years ago after marrying a local, Baş, 50, has been growing tea, potatoes, corn and green beans, as well as raising cows, in the green mountains that reach the clouds.

The birds and running stream below her tea plantation have now been drowned out with the constant coming and going of trucks carrying loads of stone and dirt, and excavators digging into the valley, making way for a stone quarry to be built to support the construction of Rize Port.

“No one, including the government, spoke to us before commencing work. During the night they brought big machines and just started,” Baş told Al Jazeera as she took a break from her harvest.

“If they continue this quarry they will destroy our lives. This valley is the source of our life,” Akyildiz said, referring to the honey and tea he produces.

Villagers have launched protests and attempts to halt construction after it began in April. But the government has imposed heavy fines on those involved and launched legal cases against them.

The quarry will support the construction of a new port to be built on the coast of Rize, Turkish President Recep Tayyip Erdoğan’s home town. The construction of the quarry, as well as Rize port, was awarded to Cengiz Holding, a group with close ties to the government and ruling AK Party.

An estimated 16 million tonnes of stone will be removed to help build the seaport.

Yakup Şekip Okumuşoğlu is among several lawyers involved in two lawsuits against the project. The complaints allege construction approvals, the expropriation of land and environmental effects are illegal.

Even with this legal process active in the Rize Administrative Court, with no date known of the ruling to be handed down, the construction of the road leading to the quarry site continues.

According to Okumuşoğlu, 17 privately owned areas were expropriated without warning for the construction of the road.

Okumuşoğlu explained under Turkish law there is an “urgent expropriation method”, which can be applied only in cases of war or in cases of emergency.

“Is there a war but we did not hear about it, or is there a state of emergency and we did not see it?” Okumuşoğlu asked. “Unfortunately, in recent years, this urgent expropriation method is frequently used … it becomes a normal practice.”

Cengiz Holding was also contacted though it informed Al Jazeera it does not give comments to the press.

In a statement in April, the company said the decision to launch the quarry was based on evaluations by government ministries involved.

“We would like to emphasise that our company does not have any determination authority or disposition regarding the selection of the quarry from which the raw material will be obtained legally … We want you to know that our company evaluates the opinions of everyone living in that region with sensitivity and seriousness,” it said.

Considering that Baş and her neighbours’ tea fields are organic, she is concerned about the dust from the quarry ruining her crops.

Her worry stems from experience working in a nearby tea field that had a quarry built close to it – though it is no longer active – and the problems she faced, including not being able to harvest the leaves because of dust accumulation.

“I couldn’t cut the tea, I couldn’t harvest it and also we always breathed in the dust, which made our throat inflamed,” Baş said. “We always had to go to the doctor because of the dust and take medicine including antibiotics and painkillers for the inflammation.”

The Turkish Medical Association has requested a medical assessment be undertaken to thoroughly assess the effects of the quarry on public health, though no parties involved have proceeded to do this.

Akyildiz, who has been a part of protests against the quarry construction since April 21 when machines entered the area, also said villagers have not been able to collect honey this season because the road is being blocked to the valley.

“We can’t access the hives any more,” Akyildiz said. “There is a special honey to this region made by [bees feeding on] chestnuts. You can’t find this chestnut honey anywhere else in the world, the villagers of Gürdere produce between eight and 10 tonnes of honey every year but they can’t produce it any more.”

Eight families have also become disconnected from a municipal water supply because of the quarry road’s construction.

“The water comes out of the tap brown with soil now. I can’t use the washing machine because there isn’t enough water, so now I’m using the water which drips from the roof [after rain],” Baş explained.

At the foot of Baş’s tea fields, where she once grazed her cattle, her land has been confiscated and is part of the road being constructed for the quarry.

“The government occupied the area. We have our own private land here that they have taken over,” Baş said, adding her husband has proof of ownership.

“I don’t have money to feed my animals, and now they can’t graze.”

Baş also mentioned she does not feel comfortable working in her fields because of the presence of soldiers who are constantly walking on to her land.

Since machines entered Ikizdere unannounced to build the road for the quarry, villagers, particularly from Ceviler and Gürdere, have been trying to stop the destruction of their valley.

On the first day, as Akyildiz described it, at least 50 residents, including elderly women, sat in front of the heavy machinery, as more than 100 police and soldiers were brought in to remove them.

During the first weeks, Akyildiz along with two other people climbed trees in order to force the construction workers to stop cutting them down.

“It forced them to stop work for eight hours, but then the gendarmerie took me,” Akyildiz said, adding that there is a court case against him for obstructing the work.

Following a three-week nationwide lockdown to manage the coronavirus pandemic, the Rize Governor’s Office issued a ban on protests on May 17 for 15 days. Al Jazeera’s attempts to get comments from the office were repeatedly met by unanswered phones.

The bans are constantly renewed with the reason given that: “Protests can be turned into illegal demonstrations by terror organisations and marginal groups.”

But the valley dwellers have refused to give up. 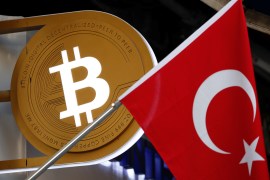 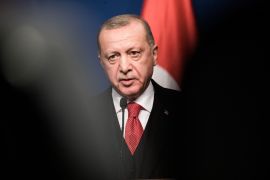 The move comes two months after the president fired the central bank governor and a deputy governor, spooking markets. 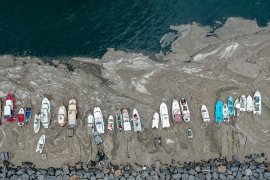 Huge mass of marine mucilage has bloomed in Turkey’s Marmara, as well as in the adjoining Black Sea and Aegean Sea.