By Ruchi Kumar and Ajmal Omari

Baghlan, Afghanistan – Aqa Mohammad has not spoken much since he found out that his father, Ghulam Mohammad, a mine clearance professional in the Baghlan province of Afghanistan, was murdered by armed gunmen last week.

“My father was a brave man and accomplished many missions even in the most dangerous areas all over the country, but unfortunately we lost him,” the 20-year-old told Al Jazeera.

Ghulam Mohammad, along with nine other employees of the HALO Trust, a British demining NGO, was killed in the June 8 attack on their compound that also left 16 other employees injured. The attack was claimed by the ISIL (ISIS) group.

“It was around 10pm and I heard some noises outside, so I went to check on the vehicles. That is when I saw the gunmen … around a dozen of them stormed into the compound,” Jawid, one of the survivors of the attack, told Al Jazeera.

In Afghanistan, it is not uncommon for a demining crew staying back at their office’s compound, to set up closer to the fields they are clearing. More than 100 staff were present at the time of the attack, said Jawid, who, like many Afghans goes only by one name.

“First they gathered us in a room and collected everything we had, our phones, wallets and other valuables. They even took our office computers. Then they separated us in four or five rooms and demanded to know who among us were Hazaras and Shias,” said Jawid, referring to the ethnic minority in Afghanistan, which has been facing persecution for their identity and largely Shia faith.

“We told them there are only Muslims here and we started to recite the kalima (the declaration of the Muslim faith). That is when they started shooting at us,” he said, speaking from his hospital bed, where he is recovering from gunshot injuries to his leg.

The HALO Trust said the attack was ethnically motivated, and that the attackers were seeking Hazara Shia Muslims as targets.

“Many of the young men who died last night were Hazara,” James Cowan, the CEO of HALO Trust, said in a statement on June 9. “This is the most serious incident the HALO Trust has endured since it came into being in 1988.”

In a statement, Human Rights Watch said the attack was a “stark reminder of the dangers” humanitarian workers face while saving lives and livelihoods.

“As a co-founder of the International Campaign to Ban Landmines, Human Rights Watch joins them and expresses condolences to the victims and their families,” it said, adding that “eradication of landmines and other explosive weapons is a work in progress.”

Targeted attacks against the Hazara community in Afghanistan and Pakistan have risen in recent years.

Last month, a series of explosions targeted a girl’s school in the Dasht-e-Barchi area of Kabul that is predominantly populated by Hazaras. At least 80 students, mostly girls from the Hazara community, were killed in the attack.

The Taliban denied its involvement in the attack. According to some HALO Trust members, the armed group even came forward to help the victims.

“The Taliban control the area, Shaikh Jalal hills, where the incident occurred. They are involved in every crime that happens in that area,” Ahmad Jawid Basharat, spokesman at Baghlan police headquarters, told Al Jazeera.

Basharat said that while there has been some ISIL activity in the province in the past year, the group was not strong enough to conduct an attack on this scale.

“The Taliban had promised they wouldn’t target the Afghan people who worked with international organisations, but their local fighters broke their word. So now they are claiming it is the ISIS,” he alleged.

Legacy of decades of war

Afghanistan continues to suffer from a recent spike in violence, a legacy of the decades of wars in the impoverished nation.

Large swaths of the country are still covered with landmines, some of which were planted decades ago during the war with the Soviet Union.

According to the United Nations Mines Action Service (UNMAS), more than 40,000 Afghan civilians have been killed by landmines and explosive remnants of the wars.

In the first quarter of 2021 alone, the UN Assistance Mission in Afghanistan (UNAMA) documented 70 such civilian casualties.

As deaths from landmines and explosives mount, the work of organisations such as the HALO Trust becomes critical.

Marco Puntin, the country director of the Emergency Centre for War Victims, has seen up close the damage the landmines can do if they are not cleared with the utmost urgency.

“It is crucial to allow deminers to do their work because it is evident from the number of mine-related injuries we see daily in our Kabul and Lashkargah (in Helmand province) centres,” Puntin said.

“Demining work must be allowed to continue because mines are still affecting the people of this country.”

Puntin said at least five percent of the injuries are suffered by children, many of whom are brought to the Italian-run war hospital in Kabul.

“For example, in Panjshir province, we still receive mine injuries, mainly children who, while playing, find pieces of old mines and devices that were placed decades ago,” he said.

Aside from the cases of old landmines, Panjshir is relatively safe and undisturbed by the violence across the country.

‘They died as heroes’

Despite reports of newer mines being laid by the warring parties, demining operations have had some success, too.

“Humanitarian mine action partners in Afghanistan have cleared more than 18.8 million items of ERW (explosive remnants of war), some 745,750 anti-personnel mines, and some 30,790 anti-vehicle mines since 1989,” a recent UNMAS report read.

However, the report also added that nearly 4,000 identified hazards remain, threatening about 1,530 communities.

Bamiyan province in central Afghanistan was among the first provinces to be declared mine-free in 2019, thanks to the relentless work of deminers such as Ghulam Mohammad.

“My father and his colleagues who were martyred worked for decades making the country safer for all,” son Aqa Mohammad said.

With the death of his father, who was the family’s sole provider, the responsibility of his seven siblings now falls on the younger Mohammad, who wants to take his father’s place in the demining profession.

“My father was very happy with the work he did. He talked about it as a service to not just the people of Afghanistan, but also its animals and nature. He would say that saving one life means saving lives of all the people in the world,” the young man said, choking with tears.

“They died as heroes and I want to follow in my father’s path.” he said. “Armed groups need to stop targeting people like my father who are working to save lives.”

However, as the United States withdraws its troops ahead of a September 11 deadline, NGOs and aid workers, particularly those employed by international agencies, face increased risks from armed groups.

A UN report said 11 aid workers were killed, 27 were injured and 36 abducted between January and April this year.

“Interference with humanitarian activities escalated in 2020, with a 140 percent increase in incidents compared to 2019,” UN spokesperson Stéphane Dujarric said, adding that the trend continues to escalate in 2021.

NGOs say they will stay when troops leave

Emergency’s Puntin agreed that growing violence in Afghanistan was affecting their work.

“We are absolutely not affiliated to any side, and we work for all those affected by the conflict. But these kinds of attacks and the overall violence, even if it isn’t directed towards us, can affect us. Maybe not as often, but time to time, we are the collateral damage,” he said.

Puntin said there were accidental firings on the organisation’s ambulances or its facilities sometimes got caught in the crossfire.

“But no matter what happens, we always keep our facilities open because we know that our services are essential to the people,” he said, adding that Emergency “remains undeterred despite the recent tragedy”.

Louise Vaughan, the HALO Trust’s global media manager, told Al Jazeera that her organisation was also committed to staying in Afghanistan after the withdrawal of troops.

“HALO was founded here in 1988 and we have weathered every regime change there since. We were there long before the 9/11 attacks and have been through many ups and down since. We do not do exit strategies,” she said.

The organisation, which has been backed by several members of the British royal family including the late Princess Diana and Prince Harry, employs more than 300 local staff in Afghanistan.

“We are there to save Afghan lives and livelihoods and will continue to do so,” Vaughan said.

However, Jawid is not reassured and says he is unlikely to return to work soon.

“They gathered us like sheep and fired on us. We could hear them shooting on our people in other rooms, too,” Jawid said, the trauma still evident in his voice. 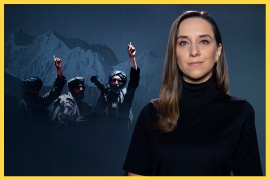 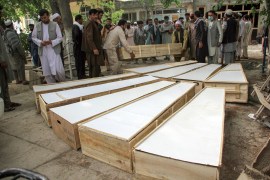 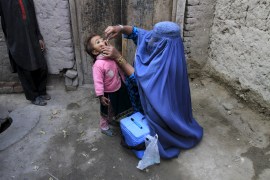 Polio workers targeted in three locations in Jalalabad city – the latest in a series of attacks against health workers. 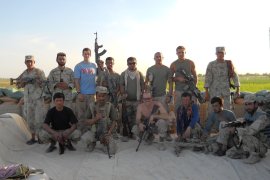