Republicans in the United States House of Representatives are looking to exploit a divide among Democrats over support for Israel following controversial comments last week by Representative Ilhan Omar, one of the three Muslim members of Congress.

Three rank-and-file Republican members of the US House filed a resolution on June 14 seeking to censure Omar and her progressive political allies: members of “The Squad”, including Representative Alexandria Ocasio-Cortez.

“We cannot turn a blind eye to members of Congress openly defending terrorist attacks by Hamas against our close ally Israel nor their dangerous rhetoric which has contributed to anti-Semitic attacks across the country,” Republican Mike Waltz said in a statement announcing the introduction of the resolution.

“We are seeing this big fight within the Democratic Party right now over anti-Semites and whether they’re going to stand up and confront this problem,” Steve Scalise, a top House Republican leader said on Tuesday.

The move by Republicans follows the opening of a divide among Democratic legislators over Israel’s 11-day bombardment of Gaza in May that killed 256 Palestinians.

In a House committee hearing with Secretary of State Antony Blinken, Omar had asked about the US opposition to the International Criminal Court (ICC) inquiries into alleged war crimes by the US, Israel, Hamas, the Afghan government and the Taliban.

If the US opposes war crime investigations at the ICC, a standing body based in The Hague, where should victims of atrocities go to seek justice? Omar had asked. Blinken responded that courts in the US and Israel already provide adequate judicial forums for such claims.

Fatou Bensouda, the chief prosecutor of the ICC, announced in March she had launched a formal inquiry into alleged crimes in the occupied Palestinian territories. Israel and the US oppose the inquiry.

The ICC is also probing alleged war crimes by the US in Afghanistan.

The congresswoman later tweeted about her question to Blinken listing the US, Israel, Hamas, Afghanistan and the Taliban as all having committed atrocities.

The tweet sparked outrage from some of her own Democratic colleagues who objected to Omar comparing the US and Israel with the Taliban and Hamas and howls of “anti-Semitism” from the Republican right.

“Equating the United States and Israel to Hamas and the Taliban is as offensive as it is misguided,” a group of 11 Jewish Democrats said in a statement two days after Omar posed her question to Blinken.

“She’s just not anti-Semitic, she’s anti-American now,” McCarthy, the House Republican leader, said on Fox News on Tuesday. “She’s equating America to the Taliban, to Hamas. She’s discrediting our greatest ally in the Middle East, Israel, the only democracy.”

Democratic leaders in the House last week had sought to quell the furore within their own party over Omar’s words and she offered a clarification that she was not drawing a moral equivalency between the US, Israel and non-state groups like Hamas and the Taliban.

“Congresswoman Omar is a valued member of our caucus,” House Speaker Nancy Pelosi, the top Democratic leader, said on CNN on Sunday.

Omar’s question to Blinken “was very legitimate”, Pelosi said, but the subsequent tweet had raised concerns by equating the US with the Taliban and Hamas. “She clarified, we thanked her, end of subject.”

In a tweet, Representative Rashida Tlaib, a Democrat, pushed back against her leadership’s public scolding of Omar as “relentless, exclusive tone policing of Congresswomen of color”.

Meanwhile, some Democrats are threatening to pursue a censure resolution condemning words by Republican Representative Marjorie Taylor Greene who three weeks ago equated requirements that people wear masks during the COVID-19 pandemic to the repression of Jews during the Holocaust.

In a media conference on June 14, Greene apologised for the stance, acknowledging there was no comparison between mask-wearing requirements and Germany’s systematic killing of Jews during World War II.

“There’s no comparison and there never will be,” said Greene who had visited the Holocaust museum in Washington, DC, earlier in the day.

Greene, who was newly elected to the House in November, was stripped of her committee assignments by majority Democrats in February for comments seen to be supportive of violence against Democrats following the January 6 US Capitol riot. 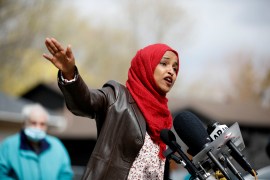 A question from Ilhan Omar sparks furore in US Congress

Muslim congresswoman accused of ‘drawing false equivalencies’ between the US, Israel, Hamas and the Taliban. 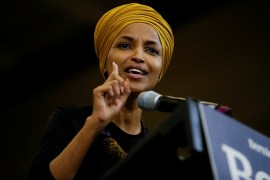 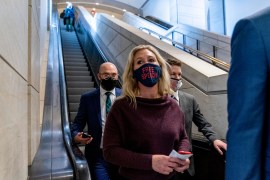 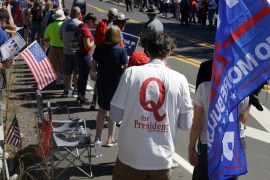 QAnon adherents may turn to violence as they struggle to face reality of Biden presidency, US intelligence report finds.