By Kaleab Girma and Sally Hayden

An Eritrean human smuggler, accused of extorting thousands of refugees and migrants in Libya, has been sentenced to 18 years in prison in Ethiopia’s capital, Addis Ababa.

Tewelde Goitom, known as Welid, was also ordered to pay a fine of 200,000 birrs ($4,608) – the maximum allowed, according to Ethiopian legislation – during the hearing that took place on Monday, six weeks after he was found guilty of five charges of trafficking individuals.

Shishay Godefay Demoz, an accomplice who assisted Goitom in Libya and went on trial with him, was sentenced to 16 years and six months in prison, and ordered to pay 50,000 birrs ($1,152). He was also found guilty in late April of two trafficking charges.

Lawyers for both defendants have said they will appeal against the verdict. Such a move needs to take place within 60 days of sentencing.

From roughly 2014 till 2018, Goitom operated warehouses including in the Libyan town of Bani Walid, where he and armed guards he had hired held Eritrean, Ethiopian, Somalis and Sudanese people who were promised to be taken to Europe via the Mediterranean Sea.

More than a dozen victims, who have spoken to Al Jazeera, described an organised scheme where they initially agreed to pay lower fees in return for a quick journey – but the amount of money demanded vastly increased once they reached Libya.

Those whose families could not pay quickly were tortured, they say.

Goitom was notorious for the number of captive women he allegedly raped, according to victims. However, none of the women who had travelled to Libya testified in court, while one male witness, who brought up allegations of sexual abuse during the hearings, was asked to stop speaking about it by judges after Goitom’s lawyer said it was irrelevant to the charges.

Remote testifying was not allowed in the trial, which began last year, meaning that the majority of people held captive by Goitom in Libya, who are now spread across Africa and Europe, were unable to participate in the court proceedings.

People who were smuggled, detained, extorted and tortured by Goitom told Al Jazeera he raped any woman he wanted, including virgins and married women. He would sometimes allegedly record the encounters and threaten to post the videos online if any woman spoke out against him.

Through his lawyer, Teshome Anjelo, Goitom has previously declined interviews to the writers. Reached by phone, the lawyer said on Tuesday his client “denies all the allegations against him”.

On Monday, both men – who wore yellow prison uniforms, sandals and masks – barely reacted as the sentences were pronounced. Security was heavily beefed up in and outside the courtroom, with more than 20 security guards present.

Prosecutors had asked the court to pass a maximum sentence of 25 years on both defendants, saying their crimes were committed in a cruel and organised manner, over many years, with the motive of causing pain, as well as earning money.

The defence disputed this, while also submitting letters from an Ethiopian Orthodox Church in Semien Shewa, Amhara region that said Goitom had volunteered with them and contributed towards the construction of a church, as well as proof that Demoz had donated blood.

These were provided as evidence of good behaviour, which can be a ground for mitigation in Ethiopian courts.

The judges opted for a medium sentence, in favour of the defence lawyers. Along with the letters, they said they took into consideration that the defendants had no previous criminal record.

“We can’t say we are happy with the sentence,” said the prosecution lawyer, who asked not to be named because they were not authorised to speak to the media.

“Considering what he did the punishment was not enough, but the judgement was done according to the law and we are satisfied with that,” they added, noting they would not appeal.

Goitom was arrested in Addis Ababa in March 2020, one month after another infamous human smuggler, Kidane Zekarias Habtemariam, was caught when an Ethiopian victim recognised him in the street.

Habtemariam controlled warehouses in the same Bani Walid compound as Goitom, and was known for extorting and torturing victims.

In February this year, Habtemariam escaped from police custody during a court visit before a hearing in his case. The police officer guarding him was later detained and questioned in relation to the escape. Habtemariam was found guilty of eight smuggling charges in absentia in April. His whereabouts remain unknown.

More than a dozen of Goitom’s victims are worried that he can still bribe his way out of prison. They also point to alleged irregularities in the way the case was brought, such as Goitom being charged under the name Amanuel Yirga Damte, which they say is a fake identity. Prosecutors say that was the name he gave police when he was apprehended.

This guys have millions of dollars put away somewhere, many of their victims were tortured, raped, extorted of large some of money, hundreds drowned in the Med & many died of torture & starvation. 250 000 K BIR & the trial itself is just an insult to all the victims.

Victims who spoke to Al Jazeera were also unhappy with the length of the sentence.

“It’s too easy. It is very short,” said Teklia, an Eritrean who was held by Goitom for almost a year between 2017 and 2018, and asked to go by only his first name for safety reasons. ”How many people are dead in Libya because of him? How much money has he collected? He should be in a very bad place.”

He was also uncomfortable with the amount of money Goitom had been ordered to pay. Teklia alone paid $8,000 to Goitom in two instalments. “This sentence will motivate other smugglers to continue their work because it’s not that long, it’s not as we expected,” he said.

“He should have been [sentenced] for more than 100 years because of what he did to my people, especially Somalis,” said a Somali now in Italy, who called Goitom “the most dangerous smuggler in Libya”. The man, who asked not to be named, said his younger brother was held for ransom until their family paid $12,000 to Goitom.

“To be realistic, I would like him dead rather than [in] prison,” said another victim, who also asked not to be identified because he is frightened of retaliation. “He’s [a] criminal, [he] killed innocent people including children and women.”

“[These] guys have millions of dollars put away somewhere, many of their victims were tortured, raped, extorted of large some of money, hundreds drowned in the Mediterranean and many died of torture and starvation,” tweeted Eritrean journalist and activist Meron Estefanos.

She called the amount of money Goitom and Demoz were ordered to pay, as well as the trial itself, “an insult to all the victims”.

Khalid al-Mishri says holding a successful vote and ridding the country of foreign fighters are key for Libya’s future. 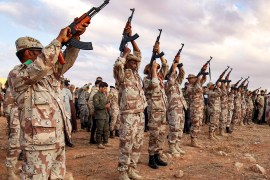 Renegade military commander is holding rallies and polishing his image ahead of polls, according to Libya observers. 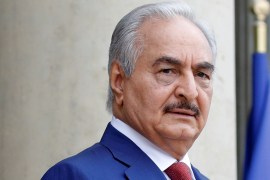 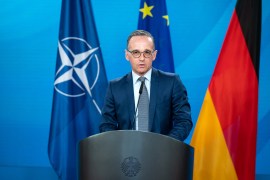