A court in India has granted bail to three young activists arrested under a stringent terror law in connection with the deadly anti-Muslim riots that erupted in the capital New Delhi last year.

The bail granted to them on Tuesday relates to a case in which the police alleged they were part of a “larger conspiracy” in the Delhi violence that followed protests against a controversial citizenship law passed by Prime Minister Narendra Modi’s government in 2019.

Devangana Kalita and Natasha Narwal, members of a feminist collective, and university student Asif Iqbal Tanha were arrested in May last year under the Unlawful Activities (Prevention) Act (UAPA).

First introduced in 1967 as an “anti-terror law”, the UAPA allows detention of an accused person for up to 180 days without charges.

The law has been made tougher in recent years after a number of amendments gave sweeping powers to law-enforcement agencies, triggering outrage by rights groups and international organisations.

In its order granting the three activists bail, the Delhi High Court said the government should be careful of “the line between constitutionally guaranteed right to protest and terrorist activity”.

“It seems that in its anxiety to suppress dissent, in the mind of the state, the line between constitutionally guaranteed right to protest and terrorist activity seems to be getting somewhat blurred,” the court said, according to Indian media reports.

“If this mindset gains traction, it would be a sad day for democracy.”

Bail to Devangana, Natasha & Asif in UAPA case. ✊🏽✊🏽
One of the happiest days of my life. Let more follow. Let justice prevail.
Alhamdulillah

The three activists were among dozens arrested for protesting against the Citizenship Amendment Act, which fast-tracks Indian naturalisation for religious minorities – Hindus, Sikhs, Buddhists, Jains, Parsis and Christians – from Pakistan, Bangladesh and Afghanistan, but makes no reference to Muslims.

The passage of the law, which the United Nations called “fundamentally discriminatory”, saw tens of thousands of Indians taking to the streets, with a sit-in organised by women in a Muslim-dominated neighbourhood in New Delhi turning into the epicentre of the protests.

It was during the anti-CAA protests that violence erupted in Muslim neighbourhoods of northeastern Delhi in February last year. At least 53 people, most of them Muslims, were killed, and dozens of houses and mosques destroyed.

Rights groups accused the police in Delhi of either inaction or complicity in the violence, the worst the capital had seen since the anti-Sikh riots of 1984.

In the police crackdown that followed the anti-Muslim riots, dozens of activists – a large number of them Muslims, some victims of the violence – were accused of instigating the riots and arrested under UAPA and other charges.

Kalita and Narwal are members of Pinjda Tod (Break the Cage), a feminist collective that campaigns for more freedom and rights for women in university hostels across India.

Tanha is a student at New Delhi’s Jamia Millia Islamia, a university founded by Muslims during India’s freedom movement against the British.

Last month, Natasha Narwal, 32, lost her father Mahavir Narwal, a retired professor and activist, to coronavirus. She was granted an interim bail of three weeks to perform her father’s last rites. 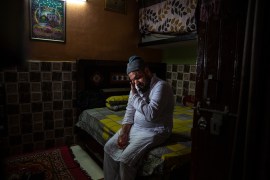 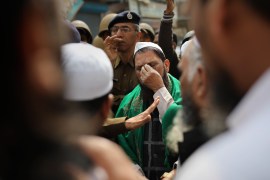 Many believe the justice system under PM Narendra Modi’s Hindu nationalist government has become stacked against them. 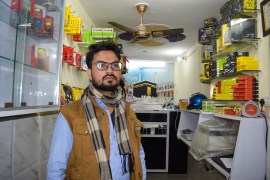 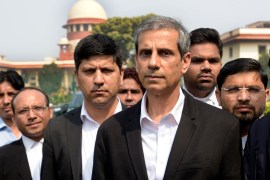 Office of prominent lawyer fighting cases of some victims of the February 2020 violence raided in New Delhi last month.